President Donald Trump’s luxury island estate in St. Martin is in the path of Hurricane Irma as the Category 5 hurricane threatens the Caribbean.

The estate, called Château des Palmiers, is on the French side of the island. Trump is currently selling the 4.8 acre estate for $16.9 million, according to Sotheby’s International Realty.

The island is currently under a hurricane watch as Hurricane Irma barrels toward the Carribbean islands with maximum sustained winds near 185 miles per hour, according to the National Hurricane Center.

The estate, located on Plum Bay on the western side of the island, boasts 11 bedrooms and 12 bathrooms.

“The property also has a state-of-the-art security system, surveillance cameras and an 8 ft. boundary wall for complete privacy,” the Sotheby’s listing says. 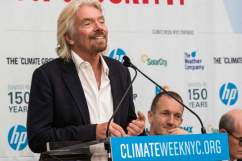 Richard Branson To Ride Out Hurricane Irma on Necker Island