Police in Maryland say that five people have been shot at the Emmorton Business Park. The Harford Sheriff’s Twitter account sent out a message, a little after 9:30 a.m. Eastern, confirming that they were on the scene and that there had indeed been a shooting.

The suspect, identified as 37-year-old Radee Labeeb Prince, opened fire just before 9 a.m. at a company called Advanced Granite Solutions where Prince has worked as a machine operator for the past four months, according to the Associated Press.

All five people that were shot at Advanced Granite Solutions were employees of the company. For this reason, police believe that this is a case of workplace violence.

“This does appear to be a targeted attack, limited to that business,” Sheriff Jeffrey Gahler said at a news conference this morning. Sheriff Gahler also told the media that police believe that Prince is the only suspect.

Prince left the scene of the crime and police spent the day searching for his whereabouts. A short while ago, the Harford County Sheriff’s Office posted an update on Twitter confirming that Prince was apprehended at about 7 p.m.

2. A Manhunt Was Underway for Much of the Day

Police believed that Prince was driving in a 2008 black GMC Acadia with the license plate PC64273.

“The killer remains on the loose. He was last seen heading toward Cecil County, toward Elkton, close to the Delaware line,” Gov. Larry Hogan said at the State House in Annapolis, according to the Baltimore Sun.

Prince was considered “armed and dangerous.”

At a press conference just after 2 p.m., Sheriff Gahler said that police no longer believe that Prince is in Maryland, but that people should still be vigilant.

As you can see in the video below, signs on the highway alerted drivers to Prince and his vehicle.

Signs on 95 South in Maryland warn people to be on the lookout for Radee Prince, and the car he was last seen driving. @NBCPhiladelphia pic.twitter.com/SWMDw7VGBF

There were also a few billboards up in various areas from Atlantic City, New Jersey, to Salisbury, Maryland.

The FBI is running this billboard on the highway from Philly to DC and from Atlantic City to Salisbury.
If you see Radee Prince, call 9-1-1. pic.twitter.com/T69rfngTWG

3. A Witness Told the Media that Prince Opened Fire After Calling His Co-Workers a ‘Meeting’ This Morning

A witness told ABC 7 News that the suspect arrived at work this morning and called his co-workers into a “meeting.” Once they gathered together in the shop area, the suspect opened fire using a handgun, the witness told the outlet.

Another witness by the name of Mike Sullivan works in the office park. He spoke with WBAL TV about what happened this morning.

“Right now, it’s total chaos. We’re actually locked in right now with three of our clients. We tried to put everybody by a door that has windows. Next door, we have another business that we know pretty well, and as we were outside talking, the guy said that he heard a bunch of arguing that calmed down. Then, he heard a bunch of more arguing. He said it sounded like a big huge fight going on, and then next thing he knew, he heard some noises — didn’t sound like gunshots, or didn’t really think it was gunshots — but the next thing he knew, that’s when all chaos broke out,” he told the outlet..

4. Five Maryland Schools Were on Lockdown

Here's a glimpse of the area where the #EdgewoodShooting took place in Harford Co. at Advanced Granite Solutions. pic.twitter.com/MpB43XpomY

5. Police Confirmed that a Shooting in Delaware Is Connected

Shortly after Prince fled the scene in Maryland, a shooting was reported in Wilmington, Delaware. According to CBS Baltimore’s Jessica Kartalija, police say that the suspect shot a man at a used car dealership. The man’s name has not been released.

“At 10:46 hours, we received a call of shots fired at a car dealership at the 2800 block of Northeast Boulevard. It was called in by a business secretary that [said an individual had been] shot twice. Upon response to our officers, we came upon an individual who was conscious and alert, but he was actually shot two times. Our officers were speaking with him and our officers were advised by the victim, he gave us the name, it was the same suspect from Maryland, same description of a vehicle that just shot him and that he was known to him,” Chief Tracy said during a press conference this afternoon. 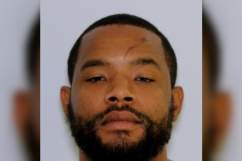 Read More
5 Fast Facts, Crime, Maryland
wpDiscuz
0
0
Would love your thoughts, please comment.x
()
x
| Reply
Police say that 5 people have been shot in Maryland. No arrests have been made and the gunman has left the scene.