Mesquite, Nevada was the hometown of Stephen Paddock, the gunman in Las Vegas Boulevard shooting, which is the deadliest shooting in United States history. The city is known for its growing retirement community and 9 golf courses.

The town has yet to put out a statement regarding the shooting in Las Vegas.

Here’s what you need to know about Mesquite:

1. It is 80 Miles Northeast of Las Vegas

Map of Nevada with Mesquite highlighted

Mesquite occupies the northeast corner of Clark County on the far east of Nevada. The eastern border of the city acts as the state line.

Interstate 15 leads southwest from Mesquite to the heart of downtown Las Vegas, which is just 80 miles away. The city is located in the Virgin River valley, which lies next to the Virgin Mountains and Virgin River.

The current population is spread out with a quarter of the people living in Mesquite being under the age of 18 and another quarter being from 45 to 64.

The racial makeup of the city is 80% Caucasian. As of the 2010 census, the racial population had reported only 14.6% of people of races other than white.

3. It is a Growing Retirement Community

Mesquite is home to a growing amount of people ages 65 and above and has 4 casinos, over 9 different public golf courses along with a museum of history and art and a state of the art library.

The town is home to the Virgin River Casino, CasaBlanca, Eureka Casino Hotel and the Stateline Casino and Motel. Mesquite is also home to the Virgin Valley Heritage Museum, which is listed in the National Register of Historic Places.

The town also hosts the Mesquite Airport, which provides facilities for general aviation and skydiving. It also hosts the annual RE/MAX World Long Drive Championship, which is an annual world championship, a long drive golf driving competition that has been hosted since 1975.

Mesquite was originally settled by Mormon pioneers in 1880. It was called the Mesquite Flat. After being flooded out by the Virgin River three times, the name was changed to Mesquite and was finally established.

The city started as a small farming town. In the 1970s, the Peppermill Mesquite casino was built and drove Mesquite’s diversified economy.

In the mid-1990s, more casinos opened. Mesquite was one of the fastest-growing small towns in the Unites States.

Mayor Litman will be on 8 News Now Monday Mornings with the Mayors on 7/10. Submit your questions to MondayMayors@lasvegasnow.com pic.twitter.com/tgTPt9kHbT

Mayor Allan Litman is an Army veteran who served in Vietnam from 1966-1967 and was decorated with a Bronze Star for valor. After the war, he taught public school in Los Angeles.

After relocating to Mesquite in 2004, Litman has become active in Veteran affairs and currently teaches spinning classes at the city recreation center.

Litman served as a city councilman from 2011 to December 2016, when he was elected mayor. 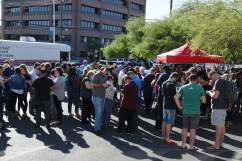