Long line forms at blood bank in Las Vegas in the wake of deadly shooting. There is a 5 hour wait to give blood. https://t.co/VOVABkxMCA pic.twitter.com/2g9M4FNcoI

Las Vegas Police say at least 59 people were killed and more than 500 were wounded when at least one gunman opened fire on concertgoers at the Route 91 Harvest country music festival near the Mandalay Bay Resort and Casino on Las Vegas Boulevard.

The shooter, 64-year-old Stephen Paddock from Mesquite, Nevada, was firing from the 32nd floor of the Mandalay Bay Hotel down at the festival, which was located in a fairgrounds area on Las Vegas Boulevard, hitting several concertgoers. Officers responded to the hotel room and engaged the suspect, police said. They do not believe at this time that there were any other shooters, despite reports of multiple gunmen. Police said they do not have an accurate number of victims yet, saying the totals they’ve released so far are estimates. Police have also not yet released a motive. Paddock does not have any known ties to terrorist organizations, NBC’s Pete Williams reports. 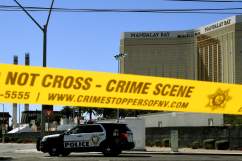 Las Vegas Boulevard Shooting: Missing People & What You Can Do

Police said the shooter is a “local individual” who was firing from the 32nd floor of the Mandalay Bay hotel just outside the concert area. He died inside the hotel room after a police SWAT team used an explosive breach to blow open the door and then engaged with him. Police said they believe he died of a self-inflicted gunshot wound before officers arrived in the room.

Heavy spoke with an eyewitness from the scene, Shawnna Saldana of Huntington Beach, California. Saldana traveled several hours and attended the music festival for three days leading up to the devastating attack.

Heavy photoShawnna Saldana (right) is pictured here with a friend before the carnage took place.

We were sitting in the VIP section at the concert. Jason Aldean was in the middle of his set when what sounded like fireworks going off. There was a veteran sitting behind us who knew it was gunshots and yelled for us all to get down. We tried to take cover under our seats. The veteran led several of us down below the bleachers we were sitting at. Seemed like the gunshots were never going to stop and sounded so close. We had no idea where they were coming from. We could hear them ricochet across the bleachers. When they stopped we made a run for it….there were bodies everywhere, people bleeding and trails of blood from those who were wounded but able to walk away. Some people were in shock and didn’t realize they were hurt. Strangers came together and helped those they didn’t know. People stayed behind to make sure others made it out safely not knowing where the shooter was. That’s the thing with a country concert…they don’t care what color you are or what you believe in. Everyone comes together. You won’t find more country pride than that at an event like this. People hear about these things on TV and media but never think it will happen to them. Don’t take life for granted.

“The scary thing is, Saldana continued, “it didn’t sound like it was coming from one spot. I know they say it was just one shooter, but it sounded at first that it was one side, then in the middle which sounded closer…then it seemed to be coming from the right side. We thought for sure there were multiple shooters.”

Saldana was texting goodbye’s and I love you’s to her husband Tim, a Los Angeles firefighter who was communicating the latest information to her through a police scanner he was listening to. “When we knew the suspect was at Mandalay Bay we tried to cover behind buildings that would block us a little bit as we made it back to the hotel,” she stated. 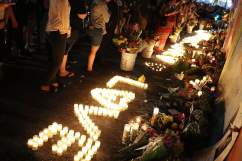 In the above photo, Saldana captioned the following:

Small price to pay for our safety. Our group is ok and safely back at our hotel. We have never been so scared. People did not survive and that was a hard thing to see. Thankfully we splurged for seating and were able to crawl under our bleachers as the gunshots ricocheted across the concert and our bleachers. I was amazed at how total strangers came together to take care of each other.

An unidentified man is being hailed as a hero after a video of him flipping off the shooter while chugging a beer went viral:

Read on for more eyewitness accounts of the tragic massacre:

“I’m a Floridian and when the nightclub had the shooting, that was devastating to me,” Singer and Las Vegas shooting witness Jake Owen says pic.twitter.com/LU5FwDK9Wg

Eye Witness: A woman was messing with concert goers and telling them "you're all going to die tonight". #LasVegas pic.twitter.com/9kbntOGkF1 https://t.co/38GNe3Q9By

Loading more stories
wpDiscuz
0
0
Would love your thoughts, please comment.x
()
x
| Reply
Over 50 people are dead following a mass shooting on the Las Vegas strip. Heavy spoke with a witness at the horrifying scene. Click here for her story and more eyewitness accounts.