New Yorker Michael Grimm, an ex-Congressman and ex-con currently hoping to be re-elected to his old Congressional seat, is apparently making a concerted effort to win the approval of President Donald Trump through a variety of strategies, including working with ex-Trump strategist Steve Bannon on his campaign and, more recently, giving an attempted “rehabilitation” interview with New York magazine where he gushed about the impressive size of President Trump’s hands. Here’s five things you need to know:

1. Trump’s Hand Size has Been a Joke for Decades

To all my brothers and sisters who have served and are serving: there are many more Americans who respect the flag you fight for than not! We have your back, and we will always be grateful for your sacrifice. #SemperFi pic.twitter.com/DI0P3opwIM

The size and proportions of Donald Trump’s hands have been an actual political issue since early in the 2016 presidential campaign. Of all the Republicans campaigning to be the GOP presidential candidate, Donald Trump had already developed a reputation for belittling opponents with schoolyard-level taunts. On February 28, Donald Trump tweeted that his primary opponent “Little Marco Rubio is just another Washington D.C. politician that [sic] is all talk and no action. #RobotRubio”

In response, Rubio told a rally in Salem, Virginia that Trump was indeed taller than he, but had small hands for his height. “And you know what they say about guys with small hands,” Rubio added. The crowd laughed in response, then applauded after Rubio added: “You can’t trust ’em!”

Of course, what “they” actually say about men with small hands is that such men also suffer from certain Freudian inadequacies. Which is why Trump’s response to Rubio’s jab inspired even sober mainstream media outlets (to say nothing of snarky blogs) to run stories with such headlines as “Donald Trump defends size of his penis” (CNN Politics, March 4, 2016). During a Republican primary debate, Trump raised his hands for people to see and said “Look at those hands, are they small hands? And, he referred to my hands — ‘if they’re small, something else must be small.’ I guarantee you there’s no problem. I guarantee.”

Trump has been sensitive about the perceived size of his hands since at least the 1980s, when the satirical magazine Spy made a point of persistently referring to Trump as a “short-fingered vulgarian.”

During a March 2016 interview with the Washington Post, Candidate Trump made multiple references to the size of his hands, calling them “normal,” “strong,” “good size,” “great,” “fine” and “slightly large, actually.”

As late as September 2017, President Trump was still reassuring people about his big hands; while visiting a Houston shelter for people displaced by Hurricane Harvey, he attempted to put on a pair of latex gloves and exclaimed “My hands are too big!”

2. Grimm’s Discussion of Trump’s Hands is Seen as an Attempt to Curry Favor With the President

New York Congressional candidate (and ex-Congressman and ex-felon) Michael Grimm might think so. On Oct. 26, New York magazine writer Olivia Nuzzi ran an article about “The Attempted Remaking of Michael Grimm,” about Grimm’s re-election campaign and focus on Steve Bannon.

One particular paragraph in the 4,800-word longform piece stood out, with Grimm discussing at length his admiration for Trump and certain of Trump’s attributes:

Grimm admits he’s only met Trump a few times, and never in a meaningful way. As a congressman, he’d visited the president’s Trump Tower office as a formality more than anything else, just like every other New York politician. But his impression of Trump, he told me, was a lasting and positive one — so positive, in fact, that if the president were the kind of person who paid close attention to his press coverage, he might come across Grimm complimenting him effusively. “I remember saying to myself, I never realized what a large man — I mean stature-wise, he’s a big man, with massive hands,” Grimm said, outstretching his own regular hands above the table. “I don’t have small hands, but when I shook hands with him, the first time I shook hands with him, I realized he was a big man.” He sensed my skepticism. “He is!” he said, defensively. “I thought they were pretty big. You don’t think so? I thought he had a big, strong grip. I’m dead serious.” He went on about how Trump is “a pretty big guy” and “not a small man even for his height” and how his hands were “more like a workman’s hands” than those of “a CEO.”

Political pundits immediately seized upon that one paragraph. The conservative National Review speculated that “The Way to a President’s Heart Is … Through His Hands?” and noted that “Republican politicians across the country are doing what they can to curry Trump’s favor. I think Michael Grimm, however, has taken the cake.” The Week headlined their story “Ex-congressman and felon Michael Grimm raves over the size of Trump’s ‘massive hands’.”

Various blogs were even less circumspect, such as the Gothamist’s report that “Michael Grimm loves Trump’s ‘massive’ hands.”

What did Scotto do to make Grimm so angry? He’d asked Grimm about allegations that one of Grimm’s fundraisers had recently been arrested.

However, what sent Grimm to prison wasn’t his fundraising activities nor his threats of physical violence (Scotto later said that Grimm apologized to him), but charges related to Healthalicious, a health food restaurant Grimm owned. Grimm was indicted in April 2014 on 20 counts, including allegations that he filed false tax returns, hired undocumented workers and engaged in mail fraud, wire fraud and perjury. That December, Grimm pleaded guilty to one count of tax evasion, and announced his resignation from Congress effective January 5, 2015.

Grimm was sentenced to eight months in federal prison and served seven, getting out in May 2016.

4. He Hopes an Appeal to Trump Fans and Obama-Haters Will get him Re-elected

Dear friends — your bedrock support over the years has been nothing short of humbling. It was my distinct honor serving you. I would love to see all of you this Sunday to thank you for your support in person & who knows, maybe we'll make some news! pic.twitter.com/nDCvfaHElk

On Oct. 1, 2017, the New York Times reported Grimm’s attempt at a political revival, noting that Grimm was campaigning for Congress again. The Times described Grimm’s attempted political revival as an ” an unusual blend of patriotism and victimhood”: Grimm has apologized for his past crimes, while simultaneously suggesting his legal troubles ere because he had “the entire Obama Justice Department weaponized against me.”

Grimm was first elected to Congress in 2010 as part of that year’s Tea Party movement. He won re-election in 2014 despite already being under indictment by then, only to resign after his guilty plea less than two months later.

Though Michael Grimm the restaurant owner has a history of hiring undocumented workers, Michael Grimm the politician is opposed to illegal immigration on the grounds that it threatens American lives and jobs. OnTheIssues.org has this quote from Michael Grimm’s 2010 campaign website: “This nation has had enough of career politicians who want to reward illegal aliens with amnesty and citizenship for breaking our laws. Most countries, including Mexico, our neighbor to the south, have zero tolerance for illegal immigration, and it’s time we did the same. As far as I am concerned, stopping illegal immigration is as much about protecting American lives as it is about protecting American jobs and maintaining a stable, healthy economy.”

Grimm was born in Brooklyn in 1970. He is unmarried and has no children (unusual for a Republican, since that party portrays itself as standing for “family values”).

Grimm did get married in 1994, to Susan Kim, daughter of Korean-American businessman and taekwondo Grand Master Jhong Uhk Kim. But the marriage was annulled that same year; Grimm says it was cordial and by mutual agreement. Kim later remarried, but Grimm never did.

When Grimm first ran for Congress as a Republican in 2010, his former inlaws (whose political sympathies lean Democrat) supported his opponent. But by 2012 Grimm’s relationship with his former in-laws had improved to the point that Grandmaster Kim hosted a $150 admission fundraising dinner for Grimm at Kim’s mansion. 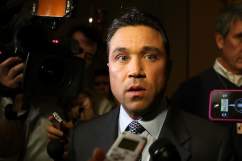