As former Hurricane Ophelia storms through Ireland and parts of the United Kingdom, thousands of people have been noticing some oddities in the sky. For starters, the sun appears red in color and the sky itself has a yellow/orange glow.

Although this phenomenon is quite rare, it was fairly easily explained. The ominous-looking sky is a direct result of the impending storm, according to the Met Office.

“The red sun is caused by winds pulling up Saharan dust. This dust is then reflected and refracted in longer wavelengths, giving a red appearance to the sky. Met Office forecaster Grahame Madge said the former hurricane is pulling air and dust up from southern Europe and Africa,” reports The Telegraph.

BBC’s Simon King explained that Ophelia — who has been downgraded to a former tropical cyclone — has been pulling in tropical air and dust from the desert. He also said that debris from forest fires located in Spain and in Portugal were also a factor in why the sky looks so strange today.

Check out some of the tweets about the red sun below.

#redsun Eerie as anything today

Residents in areas experiencing a “red sun” have been posting photos to social media over the past couple of hours. Many find the sight to be very beautiful and have expressed such in their posts.

The moon is not yellow, it’s Amber and honey and gold. And this photo is completely inadequate! #Ophelia #REDSUN pic.twitter.com/I4UHI7KSMI

That picture doesnt even do the red sun justice. This one certainly does. pic.twitter.com/9oAPGoBvA4 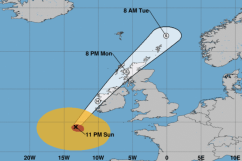