Anthony McClanahan, a former player for the Dallas Cowboys, is accused of being a suspect in the grisly murder of his wife, Keri “KC” McClanahan, who was found dead in a Park City condominium resort.

Adding another twist, Anthony McClanahan, 46, a former college football star before he was signed and then cut by the Cowboys in the 1990s, is also accused of kidnapping his young son in an earlier case. He was identified as a suspect in the murder of Keri in court documents in the earlier case, which occurred in October.

Keri McClanahan, 28, and her husband painted the picture of the perfect couple on their Facebook pages as they traveled throughout the country and world to help others with disaster relief, especially after Hurricane Harvey led to devastating floods in Texas. “My Rock gives me Strength,” he wrote on one Instagram photo of the couple. “Life is good. I love her. Set go,” he wrote with another photo. Their photos show them fixated on fitness and healthy eating. Anthony McClanahan has not been criminally charged in his wife’s homicide.

1. KC McClanahan Was Found Dead of Knife Wounds in Bed at the Resort

Police were led to the Park Regency resort in Park City, Utah on November 2, when someone reported a “ruckus” in the McClanahan room. According to the Salt Lake Tribune, they found Keri’s body in the room. “Police said the victim had knife wounds to her throat and identified her 46-year-old husband as the primary suspect.”

Life is good. I love her. Set go. #Powerof14live 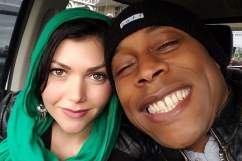 2. Anthony McClanahan Posted Many Photos With His Wife on Facebook but There Were Prior Problems in the Marriage

On social media, the couple’s photos tell the story of a happy couple devoted to fitness, children, and disaster relief (Keri was the mother of two children, but Anthony was not their father.) However, Keri’s sister told a different story to the Tribune.

Yesterday I signed a new online team member that suffers from an injury I also dealt with for years. Crystal Jones I understand your pain. In my book #Powerof14 I wrote about the pain and the frustrating I over came by eating foods from my grandmother's garden, Clara Marion taught me how to fight inflammation and toxins and now I will teach you. Hang in there. This journey won't happen over night but now you have support from 41. Set go! #41 #Powerof14online #Eattolive #Eattoburn #Eatclean #Foodcures #Foodcoaching Friday, May 7, 1999 Stampeders release linebacker Anthony McClanahan CALGARY – Calgary Stampeders General Manager and Head Coach Wally Buono released veteran linebacker Anthony McClanahan Thursday. McClanahan, who joined the Stampeders in 1995, played in only 11 regular season games last season after suffering a season-ending neck injury that required off-season surgery. "Ant Mac" leaves the team as one of the most colorful players to ever wear the Red and White of the Stampeders.

In the separate kidnapping case, Anthony was accused in early October of “child kidnapping” in a case in which Anthony McClanahan “is accused of taking his son from school and refusing to release him to the boy’s mother,” KUTV reported. That case is still pending, but authorities revealed in court documents associated with it that McClanahan had been detained and was a suspect in his wife’s murder.

3. The Couple Was Involved in Disaster Relief Efforts

Both Keri and Anthony’s Facebook pages are filled with descriptions of their disaster relief efforts, and Anthony McClanahan had recently given an interview describing how he and his wife journeyed to Texas after Hurricane Harvey struck Texas. The couple had also visited Puerto Rico, according to posts and photos on Keri’s page. Anthony’s page has a photo of the couple as its profile picture.

In September 2017, both Anthony and Keri McClanahan traveled to Houston, Texas, to help with Hurricane Harvey relief, and Anthony spoke to AZFamily about it. He said: “My wife and I left Arizona nine days ago. We came here, only thinking we were going to be here for two, because our friend’s house was submerged underwater.”

The newspaper quoted Anthony McClanahan as saying, “We sleep in our truck, we sleep at officer’s houses, we have friends who are police officers so we go those counties and we sleep there.” According to the newspaper, McClanahan also created a GoFundMe page to help with Hurricane Harvey relief efforts. However, the GoFundMe page linked by the news article was no longer active on November 3.

KC wrote about the Houston efforts on Facebook, saying, “This morning, we woke up to the news of JJ watts being praised for having 8 semis of supplies shipped to Houston. Yesterday we had 30 semis of supplies on their way, but, they got denied at the boarder, because they are not ‘Approved’. So, I’m wondering, who gets to decide what can come in? I understand that they may be trying to keep these people safe from someone doing harm with tainted supplies, but when it is the same things that are being ordered by major distribution chains, but they are just being donated, why are they not approved to pass through?”

The couple was also recently in Puerto Rico. KC wrote in September on her Facebook page, in a post in which she tagged her husband, “Puerto Rico and St. John 9/14-9/15. I have never really felt sad about leaving a place. But, when you leave a place as beautiful and welcoming as Puerto Rico, you can’t help but regret your decision immediately. The people are so amazing, welcoming, understanding, and hopeful, that you end up wanting to stay forever.”

4. Anthony McClanahan Was Cut by the Dallas Cowboys in the 1990s

Anthony McClanahan had a pro football career, but it never quite took off. “McClanahan played linebacker for Washington State in the early 1990s and later played four seasons with the Calgary Stampede of the Canadian Football League,” Fox13 reported. He “played for the Dallas Cowboys in the 1990s,” reported The Salt Lake Tribune.

“He went on join the Dallas Cowboys but was cut before the regular season,” reported KUTV.

As a Linebacker I enjoyed Picking off Balls, Breaking up Passes, Sacking Quarterbacks and Busting up Running Backs. Today I Run Mountains and Help people Reach the Top WITH that same kind of Bring the HEAT Mentality. Join me in Arizona on November 2-5 for the most amazing journey of a life time. If you like adventure, mountains, horses, pool time, night life and lots of other really cool activities. Sign up for the To the Top retreat. Couples pay $1600 with everything covered you could possible need for the weekend. All you have to do is buy your own flight. Ready? Set go. #41 Anthony McClanahan #Setgo #Fluidup #41SportsOnline #Boom #Hardworkbuildschampionships #Trainer #Fitfamily #Bootcamps #Foodcoaching #Camps #Fitness #Adventure #Letsdothis #Tothetop

McClanahan wrote on Instagram, “As a Linebacker I enjoyed Picking off Balls, Breaking up Passes, Sacking Quarterbacks and Busting up Running Backs. Today I Run Mountains and Help people Reach the Top WITH that same kind of Bring the HEAT Mentality. Join me in Arizona on November 2-5 for the most amazing journey of a life time. If you like adventure, mountains, horses, pool time, night life and lots of other really cool activities. Sign up for the To the Top retreat. Couples pay $1600 with everything covered you could possible need for the weekend. All you have to do is buy your own flight. Ready? Set go.”

According to his Facebook page, Anthony McClanahan was working in humanitarian efforts but also in sports fitness. “We are a new service for Humanity organization. we provide shelter, rescue, food, water, and love,” his page says. The profile picture is Anthony and his wife, who went by KC on social media. The page also identifies Anthony McClanahan as a “Sports Perfomance Consultant at 41 Sports” who “Worked at Sony Pictures. Studied at Washington State University. Studied at WSU. Went to Bakersfield High” and was “Married to Kc McClanahan.”

Anthony McClanahan’s page is also filled with photos of him and his wife together, especially engaging in athletics and outdoors activities, and there are numerous photos of children on the page. A friend remarked, “Great looking couple Anthony and KC.” Anthony had written about recent disasters on Facebook. For example, he posted of the California wildfires: “People in Northern California. Please evacuate your homes. Why put 1st responders in harms way. I don’t suggest a fire shelter either. Pull back 300 miles. Do it now. Set go! #Operationsetgo41.”

The couple was into healthy eating. Anthony McClanahan captioned one photo of vegetables on Instagram, “These are baked Egg plant snacks my wife made last night. If you have ever tasted egg plant its not the best tasting food on the planet until now. My wife, Kc McClanahan will surely change your mind. I’m not telling you what she added to them but you can diffently find them in our cookbook. Coming soon!”

Loading more stories
wpDiscuz
0
0
Would love your thoughts, please comment.x
()
x
| Reply
Anthony McClanahan is a suspect in the murder of his wife, Keri "KC" McClanahan. Anthony is a former player for the Dallas Cowboys.