There are virtually police st every street corner in Seminole Heights. pic.twitter.com/zaUdklsiCW

The police presence in the Seminole Heights neighborhood of Tampa, Florida, is massive this morning, after a dead body was found in the street. “An adult male with gunshot wounds” was discovered near N. Nebraska Avenue and E. McBerry Street. Police have identified the victim as 60-year-old Ronald Felton.

Police have not confirmed whether or not this shooting is related to the suspected “serial killer” in the area, who they believe is responsible for the deaths of three people in October. For the time being, police are treating this shooting as “related” until they can prove differently.

Benjamin Edward Mitchell, Monica Caridad Hoffa, and Anthony Naiboa were all killed in Seminole Heights last month, just blocks from one another. All three victims had been near or waiting at bus stops. It is unclear if this morning’s victim was near a bus stop or waiting for a bus. Mitchell, 22, was found dead on Monday, October 9. Hoffa’s body was found on Friday, October 13, but police believe she was killed two days prior. She was 32 years old. Naiboa, 20, was found dead on Thursday, October 19. All three victims were found with gunshot wounds.

During an 8 a.m. press briefing, Tampa Police Chief Brian Dugan revealed that the suspect in Tuesday’s shooting is a “black male, thin build, dressed in all black, wearing a black baseball cap.”

Police cars are lining the streets in the area. Police have set up a perimeter that extends several miles. There is a police car at just about every intersection within this perimeter.

Tampa police have warned people in the area to stay inside their homes. They have suggested that residents in the immediate investigation area stay home from school or work this morning. Although school are still open, buses are unable to get down some of the streets, which have been closed to the public.

Over the past hour or so, police have been going door to door, checking on residents and trying to locate a suspect. The crime scene is still fluid at this time, three hours after the shooting occurred.

“There is a massive police presence on the scene. Forensic evidence is being collected. Police are asking residents to avoid the area of Nebraska Avenue between Osborne Avenue and Hillsborough Avenue as they investigate,” reports ABC Action News.

The video below shows a police officer checking cars as they drive through the area.

Police are asking people to stay inside; they're also checking cars as they go through neighborhoods in the area. This is after a fourth death in Seminole Heights. pic.twitter.com/HWeBgQMVts

Below is a map of the area that is seeing a heavy police presence at this time. Local news stations have said that there were already several police cars on patrol in the area, which is why authorities were able to respond to the shooting so quickly. Bay News 9 reported that the first officer was on the scene within 60 seconds.

Police have covered such a large area in hopes that they can find the suspect, who they believe headed east from the crime scene, likely on foot.

“We want to talk with as many people as we can, we don’t think whoever did this has gone very far at this point,” Tampa police spokesman Steve Hegarty told the media. 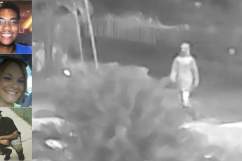 Loading more stories
wpDiscuz
0
0
Would love your thoughts, please comment.x
()
x
| Reply
Hundreds of police cars have lined the streets in Seminole Heights after a man was found dead this morning. Police are looking for a suspect.