A suspect has been arrested and charged with four counts of murder in the Seminole Heights serial killer case. Howell “Trai” Donaldson III was taken into custody on November 28, Tampa Police announced. The arrest of the 24-year-old city man comes about two weeks after the fourth fatal shooting tied to the suspect.

On Tuesday, November 14, police in the Seminole Heights district in Tampa, Florida, responded to a call of “shots fired.” Police arrived on the scene within one minute and found the body of 60-year-old Ronald Felton dead in the street.

There were three other killings in the neighborhood over the past few weeks and police believe that all three killings were related. The three victims killed in October were all “bus riders and all three were shot at or near bus stops,” according to the Tampa Bay Times.

Tampa Police Chief Brian Dugan was hesitant to call the suspect a “serial killer” when speaking with the media during a press conference that took place on Friday, October 20.

You can read more about Howell Donaldson here.

1. On October 26, Tampa Police Released an Extended Video Showing a ‘Person of Interest’

Tampa Police Department released the video above in hopes of enlisting the public’s help in identifying and apprehending the suspect in the three homicides. Although the City of Tampa’s website refers to the suspect as a “male,” Chief Dugan warned people not to make any assumptions or jump to conclusions.

When the video was first released, Dugan said that this was the only video that police have of this “person of interest.” However, on Thursday, October 26, police released an extended version of the video that shows the person running in the opposite direction of where the first victim was found dead.

Although Chief Dugan believes that all four killings are connected, he would not say whether or not the same weapon was used in each of the killings. He said that the police department still has “no leads and no motives.”

The Tampa Police Department is working with the FBI as well as the Hillsborough County Sheriff’s Office and the St. Petersburg Police in the hopes of solving this case as quickly as possible.

After the shooting on November 14,  police released a description of a suspect. He was described as a “black male, thin build, dressed in all black, wearing a black baseball cap.” Also, the suspect was seen carrying a “large black pistol.” It is unclear if this suspect is the same person in the video above.

Howell Donaldson was taken into custody for questioning on November 28 after he gave a gun to his manager at the McDonald’s in Ybor City where he works, police said. Later that night, police announced he would be charged in the slayings. They have not released many details about what led them to make the arrest.

“Unfortunately I will not have the answers that you want,” Police Chief Brian Dugan told reporters. “This is an ongoing situation.”

Mayor Bob Buckhorn told reporters, “Fifty one days ago I said this was a struggle between good and evil. Well, tonight goodness has won.”

Mitchell was a 22-year-old African-American man. He was killed on Monday, October 9, around 9 p.m. Eastern, while waiting for a HARTline bus on North 15th Street at Frierson Avenue.

Police say that the suspect shot Mitchell, who was rushed to an area hospital, where he later died of his injuries. Police believe that he was alone at the time of the shooting.

Witnesses told police that they saw a man, perhaps in his early 20s and wearing a dark coat with a hood, fleeing the scene of the shooting on foot.

Mitchell’s aunt, Angie Dupree, told Fox 13 that her nephew was an aspiring musician who moved to Tampa from Las Vegas, Nevada. His mother and father believed that Tampa would be a safe city in which he could grow up, so they sent him to live Dupree and her husband, she told the outlet. Mitchell was studying business management at Hillsborough Community College at the time of his death.

Mitchell attended Middleton High School, as did the suspect’s third victim, Anthony Naiboa, according to the Tampa Bay Times.

Two days after Mitchell was killed, Monica Caridad Hoffa was killed. The 32-year-old white female was shot and killed at the 1000 block of E New Orleans Avenue, about a half mile away from where Mitchell was shot. Police say that the shooting “may have occurred late Wednesday or on Thursday,” but Hoffa’s body wasn’t found until Friday, October 13.

According to the Tampa Bay Times, Hoffa’s body was found by a City of Tampa employee. Police noted that the victim had suffered “upper body trauma,” but a cause of death was not immediately known.

At least two Seminole Heights residents told police that they heard several gunshots on Wednesday, October 11, around 9 p.m. local time. Police were called, but there was no evidence of a shooting, a suspect, or a victim.

“I heard about five gunshots: pow, pow, pow, pow. I came outside and I looked, I didn’t see anything, I didn’t hear any cars,” resident Romano Whitley told Fox 13.

“It’s very concerning to me. This neighborhood is on the come up. Stuff like this makes me ask, What the hell is going on?'” Mary Coram told the Tampa Bay Times.

Hoffa’s social media showed she previously worked as a server and was in a romantic relationship, but was not listed as married.

4. The Third Victim Was an Autistic Man Named Anthony Naiboa

On Thursday, October 19, Anthony Taino Naiboa, 20, was found dead on a sidewalk in Seminole Heights. He was killed on N. 15th Street between E Conover Street and E Wilder Avenue, not far from where Mitchell and Hoffa were previously killed. In fact, his body was found just a few hundred feet from where Mitchell was shot.

Naiboa, the oldest of five siblings, had been diagnosed with autism. He recently graduated from Middleton High School. He was on his way home from work and took the wrong bus, his father, Casimar Naiboa, told ABC Action News.

“He was like, ‘don’t worry, I’ll be home quick.’ I said, ‘ok.’ He said, ‘I promise.’ Didn’t hear from him after that,” his stepmother, Maria Rodriguez, told the outlet.

“This is senseless. Somebody could shoot people just like that. This person needs to be caught,” Naiboa’s father told ABC Action News.

The map above shows the locations of the three recent Seminole Heights homicides.

The district suffered economically toward the end of the 20th century, but has shown recent signs of recovery with an influx of new businesses and dining establishments, in addition to multiple craft breweries, for which Tampa has become known.

“This is not a neighborhood that is not cooperating; they are concerned,” Chief Dugan said during Friday’s press conference.

“We have someone terrorizing the neighborhood… Don’t walk alone. Be aware of your surroundings…If you’re walking alone, you’re either a suspect or a potential victim,” Chief Dugan added.

Police in the area were asking residents to be on guard and have offered the following tips. 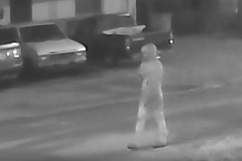 Loading more stories
wpDiscuz
0
0
Would love your thoughts, please comment.x
()
x
| Reply
A serial killer has claimed the lives of three people in the Seminole Heights district of Tampa, Florida. Police have released a video of the suspect.