Getty The race between Roy Moore and Doug Jones is expected to be tight.

Moore and his campaign chairman raised the possibility of a recount due to the razor-thin margin, and Moore’s campaign chairman noted that all of the military ballots were not yet counted. “Realize when vote is this close, it’s not over and we still have to go by the rules,” Moore, the former chief justice of the Alabama Supreme Court who was accused of sexual misconduct and overtures with teenage girls, said after Jones gave a victory speech. That raises the question: How many military ballots are outstanding in Alabama?

First, let’s start with the margin of projected victory:

Note: The results table below is powered by the Decision Desk HQ.

The margin: A 20,715 vote lead for Jones with 100 percent of the votes in. Now let’s cut to the chase: Are there enough outstanding ballots remaining to switch the outcome? Alabama Secretary of State John Merrill, a Republican who supported Roy Moore, doesn’t think so. He told CNN that he’s not certain how many military ballots there are outstanding, but he said it was unlikely to be enough to reduce a margin that large and switch the outcome. He said it was possible, though, that there are enough military ballots to reduce the margin to the 0.5% threshold needed to trigger an automatic recount in Alabama (Moore might be able to seek one that he pays for himself even with a higher margin). However, Merrill expressed doubt that a recount could shift the margin enough to rob Jones of the victory and said other absentee ballots were already counted. Merrill oversees Alabama’s elections.

Asked by CNN whether a recount could cause any outcome other than Jones winning, Merrill said: “I would find that highly unlikely to occur.” However, it appears that Moore faces quite a tough hill to climb to even whittle Jones’ victory down to 0.5%.

MSNBC reported that military ballots are unlikely to top more than 1,000 or 1,500, nowhere near the amount needed to swing the results to Moore, even presuming all of those went for Moore (certainly an impossibility). The State of Alabama has a website for information on military and overseas ballots. The latest data on it is from the 2008 general election (which presumably had much higher turnout), and the document says that there were 6,486 “uniformed and overseas” ballots returned and cast.

This mirrors 2016 military data showing that only about 8,700 Alabamans are serving in the U.S. military overall on active duty. There are 20,000 people from Alabama in the military reserves, but certainly they all didn’t vote or many are not overseas and already voted in Alabama. (As a point of comparison, in 2009, only 1,800 members of the Alabama Army National Guard were scheduled for deployment overseas, and that was in an era of heavier troop deployments.)

Al.com noted that Alabama GOP Chair Terry Lathan “issued a statement late Tuesday night acknowledging Jones’ win — concluding her statement with ‘now that this race has ended.'” President Donald Trump tweeted that a “win is a win,” and congratulated Jones on a “hard-fought” victory, which he blamed on write-in votes (which were more than the margin of the Jones’ victory.)

“I really want to thank you for coming tonight and realize when the vote is this close, it is not over, and we still have to go by the rules by this recount provision,” Moore said at about 10:30 p.m. on December 12. “We also know that God is always in control. Part of the problem with this campaign is we have been painted in an unfavorable and unfaithful light. We’ve been put in a hole if you will.” He then read a Bible verse.

Moore and his campaign chairman revealed that Moore was not conceding the race because state law triggers a recount if there is .05% margin or less. Merrill mentioned that past recounts haven’t changed Alabama election results much.

Only hours before, as Alabama voters headed to the polls in a state that hadn’t voted for a Democrat statewide for a quarter of a century, President Donald Trump wrote this, focusing on the candidates’ policy positions: “The people of Alabama will do the right thing. Doug Jones is Pro-Abortion, weak on Crime, Military and Illegal Immigration, Bad for Gun Owners and Veterans and against the WALL. Jones is a Pelosi/Schumer Puppet. Roy Moore will always vote with us. VOTE ROY MOORE!” The president won Alabama by a wide margin.

“This campaign has been about dignity and respect,” Jones said in his victory speech, given before Moore refused to concede. “This campaign is about the rule of law. This campaign is about common courtesy and decency.” Jones added that he believed the election results were about finding “common ground.” The election was extremely close, and it went down to the wire, with Democratic turnout pulling Jones over the edge. “Alabama has been at a crossroads,” said Jones. “…we have usually taken the wrong fork. Tonight, ladies and gentlemen, you took the right road.”

Could write-in votes be tossed out and affect things? Possibly, Merrill said, but it’s hard to see how that would get Moore where he needs. Presumably, write-in candidates didn’t vote for Jones or Moore. 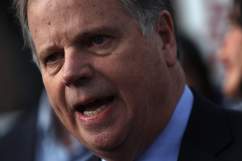 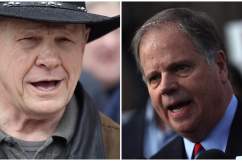 Alabama Recount: What Are the Laws & Procedures?

Loading more stories
wpDiscuz
0
0
Would love your thoughts, please comment.x
()
x
| Reply
Now that Roy Moore is refusing to concede the Alabama Senate race to Doug Jones, it begs the question: How many outstanding military ballots are there?