Cory Iverson has been identified as the firefighter who died while battling the Thomas Fire in southern California this week.

Iverson, 32, was married and had one daughter and another on the way. Those who knew him spoke to the media and had nothing but wonderful, positive things to say about a family man who was dedicated to his job.

“We are deeply saddened to have to notify you of a fatality involving one of our firefighters. Today, Fire Apparatus Engineer Cory Iverson has succumbed to fatal injuries while engaged in fire suppression efforts on the Thomas Fire. We ask that everyone take a minute to keep the entire Iverson family and friends in your thoughts and prayers,” Cal Fire posted on December 14.

1. It Is Unclear How He Died

Iverson’s body was found on Thursday, December 14, but it is unclear how he died. According to People Magazine, an “accident review team” is currently looking into the cause of Iverson’s death. In addition, an autopsy conducted by the medical examiner should confirm exactly how he died.

Cal Fire San Diego Chief Tony Meacham told the media that Iverson was involved in battling a “very active part of the fire.”

“Until this review is complete, there is nothing more that I can share. What I can say is ‘thank you’ for the outpouring of support for Cory’s family and the Cal Fire family,” Cal Fire Director Chief Ken Pimlott told the media on Thursday afternoon.

The photo below shows Iverson’s body being put into a hearse.

Very sad scene as the flag draped body of @CALFIRESANDIEGO firefighter Cory Iverson is brought in a hearse, with a procession of at least 50 fire and law enforcement vehicles, to the @VCFD Coroners office. Lost his life fighting the #ThomasFire @ABC7 #Air7HD pic.twitter.com/OMSeraHOk9

2. He Is Survived By His Pregnant Wife & Their Young Daughter

‌Iverson was married to his wife, Ashley. The couple tied the knot in 2014, according to Ashley Iverson’s Facebook page. She studied business management at San Diego State University and works as an Adjunct Professor at San Diego City College. Additionally, she is listed as an executive consultant for well-known skincare line, Rodan + Fields. Mrs. Iverson is also a hairstylist and a makeup artist and owns her own company called A Hair Love Affair.

She and Cory had one daughter together and she is pregnant with another baby girl, due in the new year.

“Cory and Ashley are expecting a second daughter this spring. Our thoughts and prayers are with Cory’s family and all of his friends and co-workers throughout the department and the fire service,” Cal Fire Director Chief Ken Pimlott told the media.

3. He Was an Apparatus Engineer

Meet hero Cory Iverson, who lost his life today fighting the Thomas Fire. The Lowe family sends our gratitude and love to his family.

Iverson worked as an apparatus engineer for the Cal Fire’s San Diego unit, a position which he had held since 2009. He previously worked at Tuolumne County in Central California and in Riverside County at the Hemet-Ryan Helitack Base.

An apparatus engineer works under the supervision of the Fire Captain. In addition to performing all the duties of a firefighter, they are also “responsible for the safe and efficient operation and maintenance of ﬁre vehicles, apparatus and equipment,” according to FireDepartment.org.

According to the Los Angeles Times, Iverson was assigned to the Thomas Fire as a part of the unit’s strike team.

Iverson had wanted to be a firefighter for several years and was very passionate about following his dream.

According to the San Diego Tribune, the other 17 firefighters that were part of Iverson’s strike team have been pulled from their duties in the area.

4. There Was a Procession Held in His Honor

Shortly after his passing, California firefighters and other emergency personnel gathered for a procession in Santa Paula in honor of their fallen brother.

“I am very saddened to report that a firefighter fatality has occurred on the Thomas Incident. Please join me in keeping our fallen firefighter and his loved ones in your prayers and all the responders on the front lines in your thoughts as they continue to work under extremely challenging conditions,” Chief Ken Pimlott, the director of the California Department of Forestry and Fire Protection, said in a statement.

One person who was at the gathering tweeted that police and firefighters saluted and many people were crying as the motorcade proceeded by.

5. The Thomas Fire Is the Fourth Largest Wildfire in California History

The Thomas Fire started on December 4 in Santa Paula. Since that time, it has grown rapidly, charring 252,000 acres. According to the latest update from Cal Fire, the Thomas fire is 35 percent contained.

Over 900 homes in Ventura and Santa Barbara counties have been destroyed in the blaze and thousands more structures are in danger at this time.

The Thomas Fire is currently the fourth-largest wildfire in California’s history. Fire officials still don’t know what caused this blaze.

Dangerous weather conditions due to a lack of rain continue to threaten southern California and could cause more wildfires to ignite. There is currently a fire weather watch in effect for the Santa Barbara County Mountains and for Ventura County through the weekend. 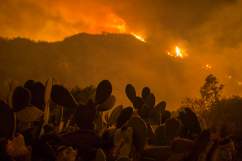 Read More
5 Fast Facts, California, Firefighters, Fires
wpDiscuz
0
0
Would love your thoughts, please comment.x
()
x
| Reply
Cory Iverson has been identified as the California firefighter that was killed while battling the Thomas Fire. Here is what you need to know.