The night before Alabama’s special senatorial election, an Alabama man stood outside a Roy Moore rally to talk about his gay daughter, who died by suicide at age 23. Here’s five things to know about Nathan Mathis.

Father, who says he's a local peanut farmer in Wicksburg, outside Roy Moore rally talks about losing his gay daughter at age of 23 to suicide. "I was anti-gay myself. I said bad things to my daughter, which I regret." pic.twitter.com/J0oOU0EJI2

On Nov. 11, the night before Alabama’s Senate election, Mathis drove to Midland City, where Moore held a rally. Mathis had a sign reading “Judge Roy Moore called my daughter Patti Sue Mathis a pervert because she was gay. A 32-year-old Roy Moore dated teenage girls ages 14 to 17. So that makes him a pervert of the worst kind. Please don’t vote for Roy Moore!”

“My name is Nathan Mathis. My daughter was Patti Sue Mathis. That’s her right there.” (He held up a photo of Patti wearing a basketball uniform.) “Judge Roy Moore called her a pervert for one reason, because she was gay …. this is something people need to stop and think about. Supposed to uphold the Constitution. Constitution says all men are created equal. Well how is my daughter a pervert just because she as gay?”

When asked if he was a man of faith, Mathis said he was. Later in the clip, Mathis says “I was anti-gay myself. I said bad things to my daughter myself, which I regret. But I can’t take back what happened to my daughter. But stuff like, saying my daughter’s a pervert, sure I’m sure that bothered her. Now, you know, Judge Moore, …. he didn’t call my daughter by name, he said all gay people were perverts, abominations. That’s not true. We don’t need a person like that representing us in Washington.”

When a reporter asked Mathis what he hoped to accomplish by going out that night, Mathis said, “I don’t know what I’ll accomplish. I really don’t. I had mixed emotions about coming, but somebody needs to speak up. And if it’s all to no avail, so be it. It won’t be the first time I’ve done something to no avail, OK.”

2. He’d Tried to Have his Daughter ‘Cured’ of Being Gay

Nathan Mathis is here outside the Moore event. He tells me his daughter committed suicide and says Roy Moore called her a pervert because she was gay. “My sign says it all,” he said. pic.twitter.com/5qZnM0IyNJ

In August 2012, the Dothan Eagle printed a letter Mathis wrote to the editor, under the headline “Soul-baring thoughts on gay-bashing.” Mathis wrote “With election time just around the corner, and watching and reading the news, ‘gay bashing’ has begun again. I once told gay jokes and bashed gays, but a real true life story might make people think just as that true life story makes me think.”

His daughter Patti Mathis was born in October 1972. When Patti was a high school senior, Mathis learned she was gay after one of her friends told him. Mathis said “I confronted Patti and I said some things to her that still eat on me to this day. I told her I was sorry that I said those mean things to her.”

Patti move away from home but came back four months later and said “Daddy, I don’t want to be gay. Will you please get me some help?” Mathis said yes, and made her a hospital appointment.

His letter goes on to say:

Patti had been raised by going to church at Christian Home Church of Christ, and she was there almost every time the door was open. Patti knew the story of Sodom, for oftentimes gay bashing was preached from the pulpit. Looking back now, I wonder how Patti must have felt, or if she even knew she was gay then. I never asked her.

We went with Patti to UAB and all types of blood work and tests were done on her that day. Finally, on over in the afternoon, the doctor called Patti, Sue and me into his office and he told Patti, “Young lady, you can’t help the way you are. There is nothing we can do for you.” I said to myself, “Man, this doctor is crazy.”

We visited other doctors and psychiatrists and Patti was told the same thing: “You can’t help the way you are.”

On March 22, 1995, Patti took her own life because she didn’t want to be gay anymore. She was tired of being ridiculed and made fun of. She was tired of seeing how a lot of people treat gay people. I found Patti that day.

Shortly after Patti’s suicide, Mathis attended a church service, but left after a visiting preacher started bashing gays a few minutes into the sermon.

3. He Served in the Alabama House of Representatives for 12 Years

Mathis has a political past; he served in the Alabama House of representatives from 1982 through 1994. Before that, he spent four years on the Houston County Commission in the 1970s.

In 2006 he ran an unsuccessful campaign for governor of Alabama, and in 2010 ran for the Alabama State Senate. In 2014 he ran again as a Democratic candidate for the Alabama State Senate until February 26 of that year, when the state Democratic party removed him from their candidate list for violating the party’s bylaws (specifically, by not supporting Democratic Party nominees in all special or general elections for the previous four years).

Mathis told the Dothan Eagle “They said they had some kind of rule. You and I would call it a ‘come kiss the ring’ rule.”

4. He’s in the Alabama Senior Citizens Hall of Fame

Last August, Mathis was inducted into the Alabama Senior Citizens Hall of Fame. According to AlabamaAgeLine.gov, the honor is given to those who have “contributed greatly to improving the lives of older Alabamians.”

Mathis was given the honor for his help in establishing the Wicksburg Senior Citizens Club, and donating new and used vans to provide transportation. He also helped raise funds to help with other senior programs in Houston County.

In 2015, Mathis opened a stocked fishing lake named after his daughter: Lake Patti Sue. Some of the proceeds from Lake Patti Sue are given to the Wicksburg Senior Citizens Club.

5. He Opposes Flying the Confederate Flag From Government Buildings

In 2016, when Mathis ran against incumbent Martha Roby for the U.S. House of Representatives, the Montgomery Advertiser asked both candidates their positions on various issues. When asked “What do you see as the most pressing issue facing your district, Mathis replied: “I voted to move the Confederate flag from top of our state Capitol to the first White House of the Confederacy even though my great grandfather was a Confederate soldier (Pvt. Burrell F. Matthews). I did this because the flag was offensive to some of our citizens, and it was hurting our efforts in recruiting new industry. Agriculture Commissioner John McMillan told our farmers recently that they need to grow more produce in order to survive. The farmers must have Mexicans in order to harvest produce. I will work hard to help our farmers to get Mexicans with green cards so they can work and pay taxes. Not citizenship but visiting workers.” 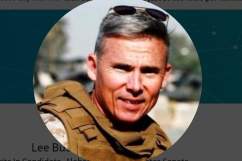 Loading more stories
wpDiscuz
0
0
Would love your thoughts, please comment.x
()
x
| Reply
An Alabama farmer whose gay daughter died by suicide stood outside a Roy Moore rally the night before the special Senatorial election to talk about his daughter and her death.