Facebook Some of the victims of the Costa Rica plane crash.

The victims include pilot Juan Manuel Retana and co-pilot Emma Ramos Calderon. Travel guide Amanda Geissler, 33, was also killed. Another American, Gene Wing Szeto, is also among the victims, according to a list provided by Costa Rican authorities. The remaining victims were members of two American families, one from Florida and the other from New York. Dr. Mitchell Weiss, his wife, Dr. Leslie Weiss, and their children, Hannah and Ari, of the Tampa area, were killed. New York residents Bruce and Irene Steinberg and their children, Zachary, William and Matthew, also died in the tragic holiday crash.

The single-engine charter plane crashed December 31 in a wooded area of Guanacaste, Corozalito, Costa Rica. A witness told the New York Daily News the plane appeared to spin and “cartwheel” just minutes after takeoff before plummeting into the ground. Photos from the scene show the charred remains of the plane.

GettyThe tail of the burned fuselage of a small plane that crashed is seen near trees in Guanacaste, Corozalito, Costa Rica on January 1, 2018.

“It was kind of low and I looked up to see it turn. I turned away and then heard the crash. It had only been in the air a minute or so,” Matt Wolfe, of Utah, told the Daily News. “My wife watched the whole thing. She thought the plane was doing some kind of barrel roll acrobatic maneuver.”

The plane, a Cessna 208B Grand Caravan, left Punta Islita Airport about noon before crashing just after takeoff. The cause of the crash remains under investigation. Wolfe said those near the crash rushed to help.

“Smoke started coming up from the crash site instantly. I heard lots of commotion, people with cars and motorcycles and four wheelers started driving in the direction of the crash,” Wolfe told the Daily News. “There was lots of black smoke. Several trees were on fire and just the tail section of the plane was visible. A few locals showed up with fire extinguishers and machetes, but the fire kept popping mini explosions. Nobody could get close. It was clear no one had made it out of the airplane after the crash.”

The tail of the burned fuselage of a small plane that crashed is seen in Guanacaste, Corozalito, Costa Rica on December 31, 2017.

In a statement, the U.S. State Department said it has been in touch with Costa Rican authorities.

“We express our condolences to all those affected by this tragedy. We are in contact with Costa Rican aviation authorities and will continue to monitor the situation,” the spokesman’s statement said.

Two investigators from the U.S. National Transportation Safety Board are traveling to Costa Rica to assist in the investigation, CBS News reports. Mechanical problems and weather are being looked at as possible causes, according to CBS News. There was high winds in the area at the time of the crash.

“The government vows to do everything necessary to help the victims’ family members in whatever they need in this difficult moment and sends them the solidarity of all the Costa Rican people,” Costa Rica President Luis Guillermo Solis Rivera said on Twitter.

Here are the victims of the tragic plane crash:

Amanda Geissler, 33, was a native of Thorp, Wisconsin, according to her Facebook page. She was working in Costa Rica as a tour guide for the travel company Backroads, according to TwinCities.com.

“Amanda is hard to describe in a short paragraph or a simple word or phrase. She was so much more than that,” Geissler’s family said in a statement. “Her passion for life and adventurous spirit allowed her to truly live and experience more in her 33 years of life than many have the opportunity to.”

Geissler played basketball at the University of Wisconsin-Stout from 2003 to 2007, and helped lead her team to three straight conference titles.

“She was a scrappy player,” Layne Pitt, the school’s sports information director, told TwinCities.com. “She had no problem going on the floor to go after getting the ball or to go after taller players, which most of them were.”

Her family said in a statement, “Since May, Amanda Geissler was working as a personal vacation travel leader with a company that shared her same passion for adventure. She was able to see many beautiful places across the world in just a few short months. Her last placement was in Costa Rica where she led families during their Christmas holiday on a tropical adventure including seeing an active volcano, 400 foot waterfall, and many beautiful beaches. She was very excited to be working with families, and was eager to enjoy the sunshine, warm weather, and ocean waves.”

Mitchell Weiss with his son, Ari.

Mitchell Weiss, 52, was a radiologist in the Clearwater, Florida, area and lived with his family in Belleair, WTSP-TV.

“It is a tragedy that the Drs. Mitchell Weiss and Leslie Weiss and their two children, Hannah and Ari, died in that terrible crash,” Rabbi Jacob Luski of Congregation B’nai Israel told ABC News. “They were a wonderful family who will be missed.”

Dr. Leslie Levin Weiss was a pediatrician in Clearwater, and lived in the Tampa area with her family, according to WTSP-TV. Neighbor Spencer Hornsby said she was part of a “great family,” and said she helped deliver his son seven years ago.

“I had just talked to Mrs. Weiss right before they went away on the trip about going to Costa Rica and her having to bring so many different pairs of shoes, jokingly, about going hiking and bike riding and white water rafting and I was kind of jealous,” Hornsby told the news station.

In a statement, Morton Plant Hospital, said both Leslie and Mitchell Weiss practiced there.

“We were deeply grieved this morning to learn of the deaths of two beloved members of our team – Drs. Mitchell and Leslie Weiss,” Kris Hoce, the hospital’s president, said in the statement. “Their lives and medical skills have touched so many in and around our community, and we are forever grateful to them. Our sympathies go out to their extended family and many friends who are also trying to process this tragic news.”

Hannah Weiss, 19, was studying theology in New York City as part of a joint degree program at List College and Columbia University, according to the New York Daily News.

“She was a special person,” List College Dean Shuly Rubin Schwartz told the Daily News. “She was driven by a real sense of social justice.”

Schwartz told the newspaper that Weiss, a sophomore, was a student leader and environmental activist.

“She had a big smile and was really passionate about tikun olam (repairing the world),” Schwartz told the newspaper.

Ari Weiss with his family

Ari Weiss was a sophomore at Shorecrest Preparatory school in St. Petersburg, according to TampaBay.com. He was a singer and often performed at his school.

“He was such a good person,” classmate Chloe Schnitt told the newspaper. “Everybody loved him. He didn’t play sports, but everybody knew him because of his acting. He was so sincere.”

He was involved in the New York-based United Synagogue Youth for conservative Jewish teens as a chapter president. His sister had previously been a vice president.

Bruce Steinberg, 50, was a senior investor at Bridgewater Associates in Westport, Connecticut, and lived with his family in Scarsdale, New York, according to the New York Post. He was a graduate of Columbia Business School.

“The Bridgewater family lost Bruce Steinberg (a senior investor at Bridgewater and a wonderful man) and his family in a plane crash in Costa Rica. Right now, we are each processing this devastating tragedy in our own way. At this time I will be devoting my attentions to doing this and helping others,” Ray Dalio, the hedge fund’s founder, said on Twitter.

“This tragedy hits our community very hard,” Rabbi Jonathan Blake, of the Westchester Reform Temple, wrote on Facebook. “All the Steinbergs will be remembered by their Scarsdale and the temple community as among the most devoted to the welfare of the Jewish community and the beauty of the Jewish tradition. They will be deeply missed.”

Irene Steinberg with her husband.

Irene Steinberg lived in Scarsdale, New York, and was involved in many nonprofits as a volunteer, according to the New York Times. A family friend, Lyn Kaller, told the newspaper that the Steinbergs traveled around the world often as Bruce and Irene wanted to expose them to different cultures and ideas.

“Irene and Bruce felt very strongly about providing that kind of culture and enrichment for their children,” Kaller told the Times.

Irene Ginsberg Steinberg was originally from Potomac, Maryland, according to her Facebook page.

The Jewish Students Association at Johns Hopkins wrote on Facebook, ” Zach was a Sophomore and a beloved member of our community. Everyone in Hillel and on campus knew Zach as sweet, sincere, and enthusiastic. He brightened the lives of those around him with his great sense of humor and friendly disposition. Zach walked campus with a smile on his face and cheer in his heart. He was extremely friendly and outgoing and used those traits to help our community as a Hillel engagement intern. This year, he attended the Hillel leadership retreat and brought to it his enthusiasm and passion for the community. He was also set to leave on Birthright this week with other Hillel students.”

William Steinberg, 18, was a student at the University of Pennsylvania, according to his Facebook page.

“I don’t have words today. My dear friend and a resilient, bright young man William Steinberg left us earlier today, along with his family in a plane crash in Costa Rica. I never met Wills family but he always told me what a smart, incredible bunch of people they were and how his UPenn acceptance made them so, so proud. I won’t, and I can’t say more. God surely takes his loved ones earlier. There couldn’t be a worse news to wake up to this new year,” Nawal Fatima Rai wrote on Facebook. “May this be a year we have enough time between tragedies to grieve each one for as long as we need to. Will, you’ll always be missed.”

Matthew Steinberg, in the Jets jersey, pictured with his brothers and parents, who were all killed in the plane crash.

Matthew Steinberg, 13, was an eighth grader at Fieldston School in Riverdale, according to LoHud.com.

Gene Wing Szeto was from California. Little information has been released about him so far, but it is believed he was in Costa Rica as a tourist and was on the tour being guided by Backroads.

A photo of Szeto was not immediately available.

Juan Manuel Retana was from Costa Rica and was the pilot of the Nature Air charter plane that crashed, according to the BBC.

He was related to former Costa Rican president Laura Chinchilla, she wrote on Twitter.

“A death has interrupted our family celebration. Our beloved cousin died as part of the crew of the plane that crashed in Guanacaste. Courage to his children and siblings and may he rest in peace. You will stay in our hearts dear,” Chinchilla wrote in Spanish.

Emma Ramos Calderon was the co-pilot of the Nature Air flight.

She was a native of Costa Rica. 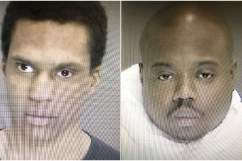