A photo of a male being taken into custody at Marshall County High School in Benton, Kentucky, has surfaced on social media. According to the Daily Mail, the male in the above photo is the high school student accused of bringing a gun into the school and opening fire. The suspect will be charged with murder and attempted murder.

“[He] was apprehended by a Marshall County Sheriff’s Deputy roughly 15 minutes after the shooting broke out,” Daily Mail reports. The arrest was described as a “non-violent apprehension.”

During a news conference, Kentucky Governor Matt Bevin confirmed that the suspect is a 15-year-old student. Police have not yet released the name of the suspect. A motive is also unclear at this time.

The incident occurred around 8 a.m. local time on January 23. Authorities say that 19 people have been injured, 14 of them suffering gunshot wounds, and two people, both students, were killed. Mayor Bevin confirmed that a 15-year-old girl and 15-year-old boy died from their wounds. The deceased female died on scene, and the deceased male died at a trauma center.

Bevin also said that investigators believe that all of the other victims are students.

According to WPSD Local, at least five students were rushed to Lourdes Emergency Department for treatment. Those students have since been released. Five other wounded students were taken to Vanderbilt University Medical Center by helicopter. One of those students suffered a gunshot wound to the head and died at the hospital.

WPSD received confirmation of the identity of one of the shooting victims from a relative.

“Daniel Austin was listening to music and giving hugs and high fives to his classmates at the high school when he was shot, his brother Shane Austin tells Local 6. Shane says his younger brother Daniel is a special needs student at the high school. Daniel has a form of autism,” the report reads.

A few minutes ago, doctors at Vanderbilt University Medical Center spoke during a press conference. Dr. Oscar Guillamondegui said that the four remaining patients in the hospital’s care are currently in “stable condition” and are expected to be okay.

“I think all four of them will survive. You never know what’s going to happen tomorrow, but, as far as I’m concerned, they are all doing quite well at this time. Stable,” Dr. Guillamondegui said. He added that three to five days is the “standard length of stay.” While he did say that some of the patients might be discharged sooner and some later, he seemed confident that they’d all be going home soon.

“Tragic shooting at Marshall County HS… Shooter is in custody, one confirmed fatality, multiple others wounded… Much yet unknown… Please do not speculate or spread hearsay… Let’s let the first responders do their job and be grateful that they are there to do it for us,” Bevin tweeted just before 10 am.

An investigation is pending and authorities have already arrived at the suspect’s home in an effort to gather more information to help them sort out this case.

A vigil will be held for the victims of the shooting at the Briensburg Baptist Church in Benton, Kentucky, at 6 p.m. this evening. Marshall County High School will be closed on Wednesday, January 24. 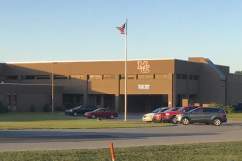 Read More
Crime, Kentucky
wpDiscuz
0
0
Would love your thoughts, please comment.x
()
x
| Reply
A male suspect has been taken into custody by police. He has been accused of shooting several students at Marshall County High School on January 23.