Rachel Koresh was only a teenager when she and David Koresh wed. But their wedding was celebrated by her family, who all followed the Branch Davidian teachings even before David came on the scene. They quickly transitioned to his faith, and Rachel gave birth to two children with David: a son and a daughter. He had children with many other wives, and Rachel and both of her children died tragically during the Waco siege in 1993. Rachel is gaining much more attention today, when Melissa Benoist portrays her in the Paramount series Waco. Benoist is regularly seen on Supergirl and was a series regular on Glee during its final years

1. Rachel Married David Koresh When She Was 14

You can now read the @wacotrib's original seven-part series that unveiled the Branch Davidian cult run by David Koresh—before it made national headlines in 1993. This nine-month investigation shows how local news can and should work.https://t.co/oMhQB6LoRw pic.twitter.com/muzYPvneuY

Rachel and David Koresh married when Rachel was only 14, the Washington Post reported in 1993. They were married for nine years before they died, and Rachel gave birth to Cyrus and his sister, Star. Rachel was one of David’s most passionate followers. She was described as pretty, with long blonde hair, and dressed casually in slacks and sweatshirts while living at the compound. Rachel was 23 when she died. Rachel’s older brother, David, also died in the fire. He was only 38. David was also an ardent follower, one of Koresh’s trained “Might Men” warriors. Rachel’s younger sister, Michelle, also died in the fire at the age of 18. Her two children — Serenity Sea Jones, 4, and Bobby Lane Koresh, 16 months — also died in the fire. It’s rumored that Serenity Sea was also David’s daughter.

2. Rachel Was David’s Only Legal Wife, But He Had Children With Other Women, Including Rachel’s Younger Sister

Rachel was David Koresh’s only legal wife, but he had sexual relations with many of the women in the compound, reported The Washington Post in 1993.  Even Rachel’s younger sister, Michelle (sometimes spelled Michele), had at least one child — possibly two — with David. David himself admitted to fathering 12 children, but other sources said he may have fathered 15 or more. Even Rachel’s father, who also lived at the compound, went along with David having children with many women.

David Thibodeau, who escaped the siege, wrote about how David Koresh decided to start sleeping with Michele Jones too. He said that Koresh had a “vision” when he was in Israel that commanded him to have a child with Michele. It took a while, but Rachel finally agreed after she dreamed that Koresh would die if he didn’t follow that vision. David Koresh slept with Michele when she was only 12.

As a child, Rachel was “bubbly… real loving and happy and fun,” said Mark Bunds in 1993. He was a closely family friend of the Jones and was baptized one summer with Rachel. But he said that later, she became more serious and quiet. It was speculated that David Koresh’s many “wives” played a role in her change in demeanor, The Washington Post reported in 1993.

Rachel’s brother, David Jones, was a USPS mail carrier, but also a bodyguard of sorts for David Koresh, according to The Washington Post. He slept with a firearm next to his bed, The Washington Post reported, and died of a single gunshot wound to the side of his head. It wasn’t known if that wound was self-inflicted.

4. Rachel’s Father, Perry Jones, Died in the February 28 Shootout at the Compound

Rachel and Michell’s father, Perry Jones, died in the February 28 shooting at the compound. He was 66. He was Koresh’s “chief errand runner,” The Washington Post reported, working with Waco contractors and often overseeing construction projects. He was described as being older and frail, but also very nice and polite. The Jones family were followers of an independent Seventh-Day Adventist sect that had summer camps at the compound years before Koresh started leading the group.

Melissa’s performance as Rachel Koresh will be outstanding and she’s going to receive the praise and recognition that she truly deserves. #waco pic.twitter.com/YEjNSu110Q

The FBI was able to bug parts of the compound, PBS reported. Some of the recordings ended up just being mundane. For example, they recorded a conversation where David asked Rachel: “Keep those children under control. They won’t be singing today.” But whether mundane or disturbing, Rachel seemed to never question Koresh, The Washington Post reported in 1993. Melissa Benoist explained about Rachel to Collider: “She was born into the church and that was all she had ever known… I still approached Rachel with an open mind and an empathetic heart. There’s no other way to tell her story.” 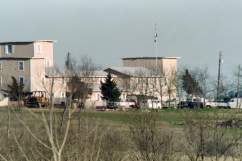 Loading more stories
wpDiscuz
0
0
Would love your thoughts, please comment.x
()
x
| Reply
Learn all about Rachel Koresh, the wife of David Koresh, and why she stayed by his side even during the most horrific of circumstances.