Getty The Branch Davidian religious compound in Waco on March 07, 1993.

With Waco premiering its six-part series tonight, many people are interested in looking back at Mount Carmel, the Branch Davidian Compound. What is at the compound’s location today and what did it look like in 1993? The home was the focal point of a raid and fire that killed 76 Branch Davidians and four ATF agents. Officially called the New Mount Carmel Center, it was the name of the home of David Koresh and his followers, just outside of Waco, Texas. The compound was located on 75 acres of land. To this day, no one is quite sure who fired the first shots that led to a two-hour firefight where four ATF agents and six Branch Davidians were killed. This firefight led to the infamous 51-day standoff with the FBI — a siege that ended on April 19 with many deaths. Here are photos and videos showing what the property is like today, and what it was like in 1993.

If you’re interested in knowing what the area looks like today, this video from 2016, by Dan Bell, gives you a good look.

At the site of the former New Mount Carmel Center today are monuments and memorial sites for the ATF agents and the Davidians who died. You can see the foundation for the original building on the site and a pool that was on the property in 1993 is still there today. In the video above, Dan Bell points out a submerged bus and talks about a storm shelter that was built with a tunnel that led to the bus.  It was “sort of a weird kind of combat plan almost,” he said about the bus.

Today, a church where the remaining Branch Davidians worship is on the land. It was built on top of the foundation where the original building was burned, Dan Bell said. “It’s very strange that there are still Branch Davidians living here,” Bell shared while filming the land. “They still kind of worship David Koresh. It’s very … kind of unnerving when you’re there, to think these people cannot see how he was wrong.” The people still there aren’t as organized as they were in 1993, he added.

This next video below, by YouTube videographer adamthewood, shows more details about the land today. This was filmed in 2012. (Note: the video starts with the opening for his YouTube channel’s show, and then moves on to film the land itself.) During the video he points out the same secret tunnel that Bell spoke about above, along with the school bus that the tunnel led to (which at the time in 2012 wasn’t submerged under water.) When he visited the church, Adam was first greeted by some friendly dogs and then he was shown around the property by someone on the land.

The property even still has the original barbed wire that authorities used to prevent people from fleeing the property. You can even see where the basketball gym used to be.

And here is another photo of the church that stands on the property today:

GettyThis small chapel in Waco, Texas, 09 June 2001 stands on the spot of David Koresh’s Branch Davidian compound that was stormed and subsequently burned to the ground in April 1993.

But it’s tough to grasp the current state of the land without understanding what it was like in the past. Below is a photo of the Center from the time of the siege, and photos of the ATF setting up for a battle:

GettyIn this photo from March 10, 1993, two M1 Abrams tanks sit in the underbrush about 200 yards from the Branch Davidian compound.

GettyVarious vehicles sit in front of the Branch Davidian religious compound in Waco on March 07, 1993.

Here are some videos showing some of the people at the compound in 1993. No one on the tapes survived. You can see Koresh’s son, Cyrus, and the daughter he had with Steve Schneider’s wife. The video wasn’t made public at the time.

And here is press coverage of the devastating fire at New Mount Carmel Center:

Here is what the compound looked like from an arial view before the fire:

Wikimedia Commons/FBIThe compound before the fire. 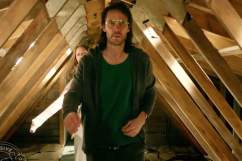 Where Was the ‘Waco’ Miniseries Filmed? Was It Filmed in Waco, Texas?

Loading more stories
wpDiscuz
0
0
Would love your thoughts, please comment.x
()
x
| Reply
Here is a look at then and now photos of Mount Carmel Center, the Branch Davidian compound from the devastating Waco siege.