The Turpin family has been making headlines all week after David and Louise Turpin were arrested and charged with torture and child endangerment. The couple has been accused of abusing their 13 children, and are due in court later this week. They are being held on $9 million bail each.

Authorities arrived at the couple’s home in Perris, California, after one of their children — their 17-year-old daughter — was able to escape out a window and call 911 using a deactivated cell phone.

Police say that David and Louise Turpin had been holding their children against their will, shackling them to their beds. The children were found malnourished and living in “filthy” conditions. All 13 kids were taken to nearby hospitals. Updates on their conditions have not been released.

On Wednesday, January 17, the public got an even closer look into the lives of the Turpin family when Louise Turpin’s sister, Elizabeth Jane Flores, spoke with Robin Roberts on Good Morning America.

A very emotional Flores said that she hasn’t had contact with the family for over 20 years. Although she doesn’t know much about how they lived their lives with their 13 children, Flores said that she was never really comfortable around her brother-in-law. She recalled the time that she lived with the Turpins. Flores was in college

“I thought they were really strict, but I didn’t see any abuse,” she said. “If I went to get in the shower, he would come in while I was in there and watch me. It was like a joke. He never touched me or anything … I was young. I was scared. I was in Texas, where I knew nobody. I was treated like one of the kids, kind of, so I had rules. Well now that I’m an adult, and I look back, I see things that I didn’t see then,” she explained.

Louise Turpin’s other sister, Teresa Robinette, spoke with Today about the situation and said that she had worried about the children in the past.

“I always made comments to Louise when I did talk to her, about, ‘Gosh, they’re so skinny.’ And she would laugh it off: ‘Well David’s so tall and lanky. They’re going to be like him,'” Robinette explained. She added that she was “shocked” and “disappointed” to hear about the alleged torture that had occurred in her sister’s home.

Flores said that she wants her nieces and nephews to know that they have family.

“I want them to know they do have family that they love, whether they know us or not,” she said. It is unclear if the children will be able to stay with extended family once they are released from the hospital.

Below are some photos of the Turpin family. Heavy has blurred out the children’s faces due to the fact that many of them are minors. 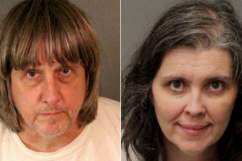 Read More
California, Crime
David and Louise Turpin have been accused of torture and child endangerment. See photos of their 13 children here.