Carol Davidsen, a former Barack Obama campaign official, fired off a series of tweets in March 2018 about the campaign’s alleged use of Facebook data. “They came to office in the days following election recruiting & were very candid that they allowed us to do things they wouldn’t have allowed someone else to do because they were on our side,” she wrote in the most controversial tweet about Facebook.

WikiLeaks touted Davidsen’s tweets in its own post on Twitter, writing, “Facebook scandal widens: Democrats got hold of all Facebook profiles and friends (‘the entire social graph’) according to former Obama targeting team leader Carol Davidsen.”

The Washington Post identified Davidsen as an Obama campaign official, writing, “In 2011, Carol Davidsen, director of data integration and media analytics for Obama for America, built a database of every American voter using the same Facebook developer tool used by Cambridge, known as the social graph API.”

“We ingested the entire U.S. social graph,” Davidsen said in an interview with The Washington Post. “We would ask permission to basically scrape your profile, and also scrape your friends, basically anything that was available to scrape. We scraped it all.”

1. Davidsen Worked for the Obama Campaign on Media Analytics, Her LinkedIn Page Says

According to Davidsen’s LinkedIn profile, she served as “Director, Integration & Media Analytics” for Obama for America from November 2011 through November 2012 in Chicago Illinois, calling herself “Responsible for ‘The Optimizer’ & ‘Narwhal.'” She added on LinkedIn, “Narwhal was a real time scalable data integration and campaign API platform that fused together facts gathered about multiple identities into a single unified profile available to every arm of the campaign.”

She also wrote that “The Optimizer was an analytics tool that combined modeled campaign target data, settop box viewership data, local and national commercial inventory rates, and behavioral analysis to discover untapped and efficient commercial inventory for the Obama campaign.”

In several places on her LinkedIn page, colleagues from the Obama campaign endorsed her for skills: “Endorsers who were Carol’s colleagues at Obama for America,” reads one list of colleagues under the skill “integration,” for example. She, in turn, endorsed a colleague on Linkedin by writing, in part, “Peter helped me tackle an almost impossible problem on the 2012 Obama campaign. In under 6 weeks, we managed the creation of the first version of ‘The Optimizer.’ The tool was used to effectively target and maximize a $400 million TV spot placement budget to reelect President Barack Obama.” That man, Peter Bouchard, lists himself on his own LinkedIn page as a former deputy of Media Analytics for Obama for America.

Davidsen has been retweeting comments on the controversy.

It's important to recognize there are differences between how Obama and Cambridge Analytics purported to use mass data from FB. But FB's response to discovering data harvesting in 2012 (which was technically against their terms) was still ¯_(ツ)_/¯
https://t.co/XDheLuntpa pic.twitter.com/ARLJbG17oz

Also *ahem*. A good number of us had been objecting and pointing out the broader harms of the interaction between Facebook's business model and politics even when it appeared to benefit Obama/Democrats. pic.twitter.com/SVk4Iw86uG

LATEST: The Obama campaign used the very same data-mining feature on Facebook that Cambridge Analytica did — enabling it to create a davatbase of relationships between every US voter. Via me & @TonyRomm https://t.co/Y1xicKOljL

The Obama campaign’s use of social media data is no secret. The Washington Post reported that “…political consultants from President Barack Obama’s 2012 presidential campaign, also siphoned huge amounts of data about users and their friends, developing deep understandings of people’s relationships and preferences.”

In a series of tweets, Davidsen made claims about Facebook and the Obama campaign. Davidsen started the thread by writing, “An article written in 2012 about a project code named tärgus.” She added, “An example of how we used that data to append to our email lists.” The Time Magazine article she shared was headlined, “Friended: How the Obama Campaign Connected with Young Voters.” It reported that the Obama campaign realized that many youth voters in swing states did not have listed phone numbers.

And just like that, reading glasses became a thing. pic.twitter.com/qWj8wXnLKL

“The Obama team had a solution in place: a Facebook application that will transform the way campaigns are conducted in the future. For supporters, the app appeared to be just another way to digitally connect to the campaign,” Time reported, calling this a “game changer.” According to the Time Magazine article, “the more than 1 million Obama backers who signed up for the app gave the campaign permission to look at their Facebook friend lists.” It was called “targeted sharing,” according to Time Magazine.

Davidsen further wrote: “Facebook was surprised we were able to suck out the whole social graph, but they didn’t stop us once they realized that was what we were doing.” And, in the most incendiary tweet: “They came to office in the days following election recruiting & were very candid that they allowed us to do things they wouldn’t have allowed someone else to do because they were on our side,” she wrote on March 18, 2018 on Twitter.

She responded to WikiLeaks’ tweet of her comments, writing, “I definitely did not say they kept the data and still use it. I don’t know the answer to that.”

“I am also 100% positive that Facebook activity recruits and staffs people that are on the other side,” she tweeted.

“I worked on all of the data integration projects at OFA. This was the only one that felt creepy, even though we played by the rules, and didn’t do anything I felt was ugly, with the data,” Davidsen wrote.

One of the articles shared on Davidsen’s LinkedIn page is titled, “How Obama’s Team Used Big Data to Rally Voters.” 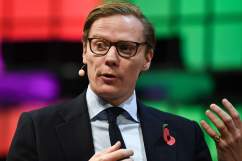 3. Davidsen Has Worked in a Variety of Data-Oriented Positions, Including for comScore & Microsoft

After the Obama campaign, Davidsen’s LinkedIn page says she worked for comScore for three years as VP of political technology and now works for the company in cross-platform products. “Passionate about creating cutting-edge technology to help the political space identify the best places to find their audience across screens including TV in the most cost effective manner,” she wrote. “Leading the political technology group at comScore, working to bridge the gap between what political campaigns, super PACs and lobbyists need today, and the technology they will need in the future as TV and digital evolve. Originally part of Rentrak, which was acquired by comScore in February 2016.”

Her page proclaims that she is about “Strategy and Implementation. Organized Data Lover” and resides in the Greater New York City area. Her LinkedIn page adds, “Results-oriented executive and technical manager who has the capacity to make business, product, technical decisions, and to take authority and be held accountable for the success or failure of the overall service. Strong background in product development, deployment, and operations. Specializes in cultivating strong relationships and demonstrated success at delivering high-quality products under tight deadlines while managing changing priorities.”

She is the founder of a Brooklyn based platform called Cir.cl, which she wrote was a “peer-to-peer targeting platform geared toward social marketplaces. Cir.cl added geo location, alerts, price management, offer management, & payment processing, all while giving you the best idea of who you are dealing with online.”

She was also a product and program manager for “Part of a software start up (Navic Networks) acquired by Microsoft in 2008 providing television advertising products for US cable operators, programmers, and advertising agencies.”

She received several endorsements on her LinkedIn page. One said, “Carol and I worked together on several key projects at Comverse. I was impressed by Carol’s ability to see the overall goal of the project and manage the details to insure the implementation was a success. Carol also demonstrated her ability to take ownership of difficult problems and find the resolutions.”

On Twitter, Davidsen writes a lot about data and politics and she writes things like this, “I was right about what keeps me up at night being about price discrimination. That is where all of the true potential ugliness comes out in an algorithm based world that allows micro targeting.” Her political posts tend to be from the Democratic perspective.

She also writes a lot about Facebook, and she has been doing so since before the Cambridge Analytica story broke. She dressed her child in a pro-Hillary Clinton jumper. She shared a Christmas card from the Obamas.

@WhiteHouse it arrived. Yay! My holiday is made. Thank you @POTUS @FLOTUS ? pic.twitter.com/R2XOS2i6Qr

I start talking about Facebook at around minute 18, and had more to say, before getting dragged off stage because i didn’t understand the clock in the back of the room. Ha https://t.co/GhytQzghX5

She also commented of Oprah Winfrey: “Presidential.” She has posted negative tweets about Trump.

5. Facebook Suspended a Conservative Data Firm That Worked on the Donald Trump Campaign

Cambridge Analytica is a data analysis firm that claims to have a trove of data points about the personal preferences of millions of Americans. The firm helped Donald Trump’s presidential campaign and has now been suspended from Facebook.

Special prosecutor Robert Mueller previously requested documents from the company as part of his investigation into the Trump campaign and Russia. Julian Assange, of WikiLeaks, previously tweeted that he was contacted by the company about Hillary Clinton’s emails. In short, Cambridge Analytica has found itself the subject of growing controversy. The company also has ties to Trump’s son-in-law Jared Kushner, former White House adviser Steve Bannon, former National Security Adviser Michael Flynn, and mega GOP/Trump donor Robert Mercer.

Here’s the Channel 4 report: Senior executives at Cambridge Analytica have been secretly filmed saying they could entrap politicians in compromising situations with bribes and Ukrainian sex workers. https://t.co/3hD4CAh6NK

In light of Facebook-Cambridge Analytica kerfuffle, it’s worth reviewing Facebook’s long history of lax enforcement against apps and partners who steal data from its users. /1

The Facebook suspension derives from the use of an app “thisisyourdigitallife” to obtain personal information of 270,000 people and their friends. Essentially, the firm mined Facebook to collect data on Americans, analyzing the data points to create personality and political profiles that politicians and others use to better tailor messaging.

According to The Washington Times, “Cambridge Analytica, formerly led by ex-White House strategist Steve Bannon, denies that it used any Facebook data for the Trump campaign in 2016. The firm says it deleted all the information when it learned that the academic researcher shouldn’t have sold the data to the company.”

You can read more about Cambridge Analytica and the Facebook suspension here:

Loading more stories
wpDiscuz
0
0
Would love your thoughts, please comment.x
()
x
| Reply
Carol Davidsen, a former Obama campaign official, wrote controversial tweets in which she says Facebook was "on our side."