Conor Lamb, the Democrat who is the apparent victor in the Pennsylvania 18th Congressional District’s special election, comes from a family with a long tradition of service in the state’s politics.

The race is being closely watched because Pennsylvania was one of the surprise upsets that gave President Donald Trump the White House. The district that Lamb is running in went to Trump by more than 20 points, but polls had shown a much closer race for the House. The race is being watched as a bellwether of public opinion toward the president.

That all has a lot of people wondering more about Lamb’s biography and his family. Lamb is a former assistant U.S. attorney who served as a captain in the Marine Corps. He is only 33-years-old. The Republican candidate in the race is Rick Saccone. They are running for the seat vacated by scandal-scarred Republican incumbent Tim Murphy.

By Wednesday evening, Lamb led Saccone by a mere 627 votes. The New York Times declared Lamb the victor, saying that margin appears “insurmountable.” Just before 1 a.m., Lamb gave what sounded like a victory speech even though election officials and the media had not yet called the race, saying, “It took a little bit longer than we thought, but we did it…We followed what I learned in the Marines: Leave no one behind. We went everywhere, we talked to everyone, we invited everyone in. And we found that there is public support for programs like social security and Medicare that’s nearly universal.” Lamb told the crowd that “we fought to find common ground…mission accepted. People are so tired of the shouting on TV and in our politics.” Republican Saccone has yet to concede and has floated the possibility of a recount.

1. Conor Lamb Appears to be a Bachelor

Is Conor Lamb married? The answer to that question appears to be no, he’s single. Lamb’s website bio page makes no mention of a significant other; profile stories on Lamb do not either. The campaign website bio says that Lamb “resides in Mt. Lebanon, the southern suburb of Pittsburgh where he grew up. He went to Pittsburgh Central Catholic High School (2002), and went to college and law school at the University of Pennsylvania (2006, 2009).”

Conor Lamb was an assistant U.S. attorney from 2014 through 2017, according to the website bio, which says that, prior to his appointment as a federal prosecutor, “Conor was a Captain in the U.S. Marine Corps. He completed active duty service in 2013 and joined the Marine Corps Reserves.” On Facebook, he calls himself a “Marine, prosecutor, Catholic, Democrat. Running for Congress in PA-18.”

Saccone has been married for decades to Yong, a woman he met in South Korea. You can learn more about Yong Saccone here: 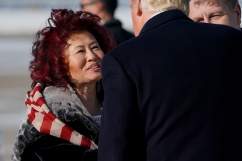 2. Lamb’s Grandfather Was a Prominent Democratic Politician in Pennsylvania

Politics clearly resides in Lamb’s bloodline. According to Time Magazine, “Raised in the Pittsburgh area, Lamb is the youngest political figure in a family long active in southwestern Pennsylvania politics.”

“This is the party of my grandfather. He believed in FDR who taught us all that people have a right to know that their government works on their side of the street,” Lamb said. “What that means is that I will work on the problems our people face.” He called himself a “proud western Pennsylvania Democrat.”

His grandfather Thomas F. Lamb was a Pennsylvania politician who “served in the House for eight years and then eight more in the state Senate, the last four as Senate majority leader,” according to the elder Lamb’s 2015 obituary.

The photos above and below were posted by Coleman Lamb, Conor’s brother.

Looking through some pics of Pop tonight, here's two good ones with a younger @ControllerLamb pic.twitter.com/qDyNbM8Mwv

According to The Pittsburgh Post-Gazette, Lamb’s “grandfather Thomas Lamb was the Democratic leader in the state Senate during the 1970s, later becoming Gov. Robert P. Casey’s top legislative aide.” When Thomas Lamb died, the newspaper memorialized him as “an Irish Catholic immigrant’s son from the West End who rose to become leader of the state Senate Democrats in the 1970s.” Tom Lamb was 92 when he died.

The newspaper obit called Thomas Lamb “a skilled practitioner of the meet-and-greet, Mr. Lamb’s reputation was one of fairness and compromise, and he was respected for his ability to get along with his Republican counterparts… he was also a party loyalist, keeping the Democrats united.” Tom Lamb was survived by children Tom Lamb Jr., Jim Lamb, Michael Lamb, and Barbara Garvey, according to the obit. Lamb was photographed with his grandmother on election day going to the polls.

A column by Dennis Roddy in PennLive remembered Tom Lamb as a man who “grew up on a working class hillside in the city’s west end, went away to war, graduated Duquesne law school on his return, and launched a career a city where a kid from a Catholic university was limited in the law firms that would have him.”

Lamb moved into his grandfather’s home, telling Politico, “My grandfather … always used to say—I remember it really well—that he was proud to be a politician.”

Michael Lamb’s city biography further describes him as an “aggressive political organizer” who has “managed successful political campaigns in Allegheny County and in the City of Pittsburgh, including the Allegheny 2000 Citizens Committee which advocated for the County Home Rule Charter.”

“In addition to being City Controller, Michael Lamb is active in the community. Lamb was a founding co-chair of A Plus Schools, the community alliance for Pittsburgh Public education. In addition, Lamb serves on the boards of the Kane Foundation, the Catholic Youth Association, the Downtown Pittsburgh YMCA, and the 3 Rivers Wet Weather Demonstration Project,” the biography reads.

Former Vice President Joe Biden stumped for Conor Lamb in Pennslvania, and he told the crowd that Conor looked very familiar to him. He saw a resemblance to his son Beau, who was also a politician and veteran who tragically died of brain cancer.

Biden was commenting on personalities, not appearance, but there’s no question that Conor Lamb also physically resembles Beau Biden. “He reminds me of my Beau because with Beau and with Conor, it’s about the other guy,” Biden said while campaigning for Lamb. It’s speculated, of course, that Biden may be gearing up to run for president against Trump in 2020.

A couple pics of Pop and me, learning to play the banjo and rocking my Clemente jersey. http://t.co/Y1Wr69bDFY pic.twitter.com/YvfHcs9bdS

According to TribLive, Conor “Lamb graduated from Central Catholic High School in 2002 and the University of Pennsylvania in 2006. He earned his law degree from Penn in 2009.”

Conor Lamb “counts a Lasallian Christian Brother among his closest friends. The two like to critique Sunday liturgy the way movie buffs discuss an actor’s performance,” Politico reports. In his first campaign ad, Lamb appears at a shooting range and the narrator says he still “loves to shoot.”

Conor Lamb's First TV Ad: "Bio"Conor Lamb for Congress's first TV ad, "Bio," highlights his roots in the district, his background as a Marine and federal prosecutor, and his focus on fighting for jobs, health care and Social Security. conorlamb.com2018-01-18T14:00:00.000Z

He went on to become a prosecutor in the Marines where he “took on cover-ups of sexual assault in the Corps, both on Okinawa and at the Naval Academy,” according to Payday Report. His moderate views make him a threat to Republicans in the House race. According to Politico, Conor Lamb is a devout Catholic who is “pro-union and pro-gun, backs bipartisan deals for fixing Obamacare and the nation’s infrastructure, wants more job training and less college debt, and says he’s pro-fracking but pro-environment, too.”

Read More
5 Fast Facts, Breaking News, Donald Trump, Election, Pennsylvania
Conor Lamb, Democrat running for a Pennsylvania, House seat is not married. Although he has no wife, Lamb's family is interesting due to years in politics.