Three sisters who have amassed millions of followers on Instagram are facing backlash for their mother’s anti-Muslim views.

While the Oshry sisters are now attempting to distance themselves from their mother, it appears that their efforts are too little too late. Some are raising their eyebrows at some earlier posts published by the sisters, Claudia in particular, which struck viewers as bigoted and racist (including one of Claudia’s posts wherein she likened paying a cab driver to supporting terrorism), and other offensive posts.

Claudia was quick to apologize for her disturbing posts, often starting off with, “I can’t believe I even have to say this, but I’m not a racist.”

1. Claudia Oshry Soffer Has Made Several ‘Controversial’ Statements in the Past That Heavily Implied Racism, Bigotry & Islamophobia

As previously mentioned, Claudia once made a “joke” about feeling like she supports terrorism whenever she pays a cabdriver. She later apologized for the comment, denying once again that she is prejudiced.

Claudia is not the only Oshry sibling who tweeted something derogatory toward President Obama. Jackie tweeted the following to President Obama in 2015: “Hi @POTUS, Can you reimburse me for all the cabs I’m taking bc your piece shit of plan to defeat ISIS makes me scared to take the subway? Ty,” The Daily Beast reports.

In fact, Jackie has been so outspoken against Obama in the past and so vocal about her views that some of her followers on Twitter have started calling her “JacKKKie” as a term of endearment rather than an insult. Jackie has since been an avid Trump supporter and often employs the #MAGA hashtag.

2. While The Oshry Siblings Have Attempted to Hide Their Relationship With Pamela Geller on Social Media, they Regularly Spend Time Together

Getty ImagesOshry and her husband.

When Claudia Oshry Soffer wed her husband, “The Boy with No Job,” none of the 275 guests were allowed to bring smartphones or cameras. In the wake of celebrity (and pseudo-celebrity, as the case may be) weddings, it’s not that uncommon for there to be a no-camera policy. If there is a serious risk that one of your guests might try and sell one of your wedding pics to the paparazzi or to the press for a good price, it would certainly feel like an invasion of policy and a violation. But this is not Jay-Z and Beyonce’s wedding, nor is it George and Amal Clooney’s.

So, what it is it that Claudia Oshry Soffer was trying to hide from the public? Perhaps the presence of her mother, Pamela Geller, who still plays a very active role in her daughters’ lives. No, she’s not included in the girls’ Instagram posts, nor is she included in their tweets. But when it comes to the private lives of the Oshry girls, Geller is very much present.

Geller is not estranged from her girls, nor is she uninvolved with them. She simply is kept quiet on social media so that her children can flourish as “influencers” without being clouded by her controversy. However, it was only a matter of time before someone, in this case The Daily Beast, put 2 and 2 together.

3. Pamela Geller Has Built a Career off of Hate

Watch: Pamela Geller speaks at QVGOP on World Hijab DayGellerReport.com Fatwabook.org The mission of the Queens Village Republican club is to continue to advance the basic Republican principles of maximum personal freedom and limited government. Doing that from the environment of a Club that traces its ancestry to almost the beginning of the national Republican Party itself — videographer, Pamela Hall2018-02-03T17:12:11.000Z

Pamela Geller is a well-known activist, blogger and the current president of the group Stop Islamization of America (SIOA). The SIOA is also known as the American Freedom Defense Initiative. It is recognized by the Southern Poverty Law Center as an anti-Muslin Hate Group as well as the Anti-Defamation League. Geller and Spencer have laughed off the categorization of the SIOA as a hate group as a “badge of honor.”

Who also runs the SIOA? Robert Spencer, who runs the American anti-jihadist movement. (Not to be confused with prominent neo-Nazi author Richard Spencer). Geller and Spencer co-wrote a book on the “Obama administration’s War on America.” Both Geller and Spencer have been banned from the UK for their hateful rhetoric.

Geller was even quoted in Anders Behring Breivik’s manifesto before he went on his bloody rampage in Norway in 2011, killing 77, mostly children.

Geller later went on to condemn Anders’ attack as outlined in this article published by Slate.

“Geller is outraged. ‘Attempts to link us to these murders on the basis of alleged postings by the murderer mentioning us are absurd and offensive,’ she writes. Breivik ‘is responsible for his actions. He and only he.’ She adds: ‘Watching CNN and BBC coverage about Norway, I found very disturbing to hear the number of times they use the word ‘Christian.’ They would never dare refer to religion when it is jihad, and this attack had nothing to do with Christianity.”

4. None of the Oshry Siblings Have Denounced or Disagreed with Their Mother, Until Now

While the Oshry siblings have gone to great lengths to hide the identity of their mother, now that they have been outed as their daughter by The Daily Beast, they are attempting to distance themselves from her and to state that they disagree with her extreme views.

“Claudia told Page Six in an exclusive statement, “We want to be clear to our audience and fans that our political and cultural beliefs are not anti-Muslim or anti-anyone. Our views are separate from our mother’s. Being raised by a single parent, we were taught to make our own choices based on our personal beliefs. We are inspired to think for ourselves and we do. We do not condone discrimination or racist beliefs of any kind,” Page Six reports.

Those of you who live in New York might have personally seen some of Gellers anti-Islam propaganda. “Geller, meantime, has frequently battled the MTA and other cities’ transit authorities to put up posters with messages such as, “Islamic Jew-Hatred: It’s In the Quran,” Page Six reports.

An apology to all of you.

Sure, Claudia attempted to apologize by posting a short Instagram video. Is all forgiven for the Oshry siblings? Apparently not; it looks like it will take more than a “tearful” post to get the Oshry family back in the good graces of social media.

Of course, many of her supporters were quick to accept her apology, saying things like “to each their own” and “everyone makes mistakes.”

However, some others need more than an Instagram apology.

As of right now, the Oshry siblings’ morning show has been canceled. 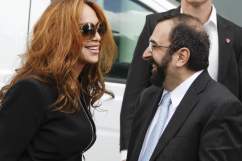 Read More
5 Fast Facts, Celebrities, Politics, Youtube
Claudia Oshry Soffer and her siblings have been outed as the daughters Pamela Geller, who is an anti-Muslim extremist.