Pamela Geller, a conservative political activist and a vocal opponent of “Islamization” in America, organized the Muhammad Art Exhibit and Contest where two gunmen opened fire on an unarmed security guard Sunday night. The gunmen were killed by police while the security guard survived with non-life-threatening injuries.

Geller has gained notoriety for her controversial opinions on Islam. She said she organized the controversial art exhibit and contest, which offered $10,000 for the best cartoon of the Prophet Muhammad, in defense of free speech. The event was organized after thousands of protesters gathered outside a pro-Muslim conference at the Curtis Culwell Center, the same Garland, Texas location where Sunday’s shooting occurred.

One of the shooters has been identified as Elton Simpson, a 31-year-old from Phoenix, Arizona.

Here’s what you need to know about Geller:

1. Geller Helped Lead the Protest Against Plans for a Mosque Near Ground Zero

Geller, a 56-year-old New York native, worked for the New York Daily News as a financial analyst and in advertising, and was the assistant publisher at The New York Observer. She told the Village Voice that her political mindset beliefs about Islam came after the 9/11 terrorist attacks.

She entered the national spotlight in 2010 by leading the opposition against plans for a Muslim community center a few blocks away from Ground Zero in New York City. She called the Park51 project a “triumphal” moment for Muslims, because they were building a mosque on “conquered land,” the Huffington Post reported. In a blog post, she called the mosque proposal a “stab in the eye.” 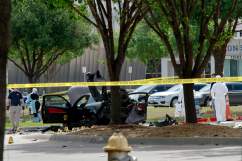 An ad in a New York Subway station saying, “In any war between the civilized man and the savage, support the civilized man. Support Israel. Defeat Jihad.” The photo was taken on September 24, 2012. The defeat Jihad” ad, is the work of the Pamela Geller-led group American Freedom Defense Initiative. (Getty)

Geller is the co-founder of two anti-Muslim groups that have been called hate groups by the Southern Poverty Law Center along with Robert Spencer, Stop Islamization of America and the American Freedom Defense Initiative. Geller and Spencer started the groups during the protests against the Ground Zero mosque.

She fought back against the SPLC and called them an “uber-left” organization.

“My group is a human rights group,” she told the New York Daily News. “And these people are taken seriously? This is the morally inverted state of the world.”

3. She Wrote a Book Calling President Obama the ‘Post-American President’

Geller is the author of three books, including The Post-American Presidency: The Obama Administration’s War on America, which was published in 2010. The book is critical of Obama’s policies and says he is the post-American president because of his policies on freedom of speech, the free-market system and foreign policy.

She also wrote Stop the Islamization of America: A Practical Guide for the Resistance and Freedom or Submission: On the Dangers of Islamic Extremism & American Complacency.

4. She Runs a Blog Called ‘Atlas Shrugs’ in Honor of Ayn Rand

In 2004, Geller started her blog called “Atlas Shrugs,” which is named in honor of author Ayn Rand. Her blog first gained attention when she published the cartoons of the Prophet Muhammad from the Danish newspaper Jyllands-Posten.

She also launched her campaign against the Ground Zero mosque on her blog.

5. She Called the Texas Attack the Start of a War

Geller posted a statementon her website after the shooting:

Two men with rifles and backpacks attacked police outside our event. A cop was shot; his injuries are not life-threatening, thank Gd. Please keep him in your prayers.

The war is here. 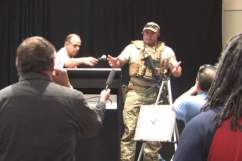