Rafaela Vasquez, 44, was the back-up driver who was in a self-driving Uber when it hit Elaine Herzberg on Sunday night, authorities shared. Herzberg was crossing a street with her bike when she was hit, and it appears that Vasquez might have been looking down shortly before the accident. Uber has temporarily suspended all self-driving vehicles in Pittsburgh, San Francisco, Toronto, and the Phoenix area while investigating the crash. Here is what you need to know about Rafaela Vasquez.

1. A Video of the Accident Showed Vaquez Looking Down Right Before Herzberg Was Hit

During a video of the accident released by Tempe police, you can see the driver looking down periodically, including just before the accident. The video shows both an interior and exterior dashcam view of the accident, but it cuts off just before the crash due to the disturbing nature of the footage. It’s not clear at this time exactly what Uber’s policies are for their back-up drivers and whether they are supposed to keep their eyes on the road at all times just as if they were actually driving. Sgt. Ronald Elcock said it wasn’t apparent that the SUV tried to brake while it was approaching Herzberg. He also said that impairment did not appear to be a factor for Vasquez or Herzberg.

You can watch the video below. Warning: The video may be disturbing. It shows the immediate moments before the crash, including the woman walking in front of the car just before impact.

Herzberg was hit while pushing her bicycle, with shopping bags on the handles, across the street. She was homeless.

2. Vasquez Was in Prison for Attempted Armed Robbery in 2000, But Had a Clean Record Since Her 2005 Release

Vasquez was in prison for three years and 10 months for convictions related to attempted armed robbery and unsworn falsification, AZ Central reported. The unsworn falsification charge was based on Vasquez giving false information while applying for government benefits. The attempted armed robbery happened in July 2000. According to police, she and an accomplice conspired to rob her employer, Blockbuster, and a co-worker of a $2,782.98 work deposit. According to court records, a probation officer said that Vasquez realized she had surrounded herself with people who encouraged her to take those actions, and she needed to change the people she allowed in her life.

She was released in 2005. Her criminal record was under a different legal name of Rafael Vasquez. She has had a clean record since her release.

3. Uber’s Hiring Policy Is To Give People Second Chances

Uber said the driver met its hiring requirements, which state “Everyone deserves a fair chance.” An Uber spokeswoman added: “Vehicle operators in Arizona undergo a screening process that checks local, state and national databases and meets local requirements by law. The vehicle operator met these requirements.”

Although Uber’s general policy is to give everyone a chance, that policy must also adhere to specific state laws. In Colorado, the company came under scrutiny for hiring felons because state law prevents rideshare companies from hiring anyone with felony convictions, among other limitations. Uber said at the time that a process error led to background information not catching people who should have been disqualified.

In California, the company’s policy is that drivers are disqualified if, in the past seven years, they have felony convictions, or convictions for violent crimes, DUIs, drug-related driving offenses, sexual offenses, child abuse or endangerment, or for speeding more than 100 mph. Even under that policy, Vasquez would have qualified because her conviction was more than seven years ago.

But in Arizona, Gov. Doug Ducey signed an executive order banning companies from asking about criminal records in initial job applications. Criminal records should not disqualify candidates from getting a job interview, his order went on to say. However, certain convictions can still preclude an applicant from getting a particular kind of job.

4. The Tempe Police Chief Said Uber Was Likely Not at Fault Because the Driver Didn’t Have Time to React

Tempe Police Chief Sylvia Moir said on Monday that Uber was likely not at fault, but they weren’t ruling out possible charges against the backup driver, The Verge reported. Moir said that from the footage, it appeared that the driver had very little time to react, and the sound of the collision was her first alert about what happened. “The driver said it was like a flash, the person walked out in front of them.”

Brian Walker Smith, a law professor at the University of South Carolina who studied autonomous vehicle liability, had a different opinion, Bloomberg reported. It was too soon to draw any conclusions from preliminary information, he said, but the lack of braking might indicate an issue. “It’s possible that Uber’s automated driving system did not detect the pedestrian, did not classify her as a pedestrian, or did not predict her departure from the median. I don’t know whether these steps occurred too late to prevent or lessen the collision or whether they never occurred at all, but the lack of braking or swerving whatsoever is alarming and suggests that the system never anticipated the collision.”

5. The Intersection Where Herzberg Was Killed Can Be Confusing to Pedestrians

GettyPilot models of the Uber self-driving car is displayed at the Uber Advanced Technologies Center on September 13, 2016 in Pittsburgh.

Officials said that Herzberg was walking her bike across the street, outside a crosswalk, when she was hit, ABC 6 reported. The crash occurred near Mill Avenue and Curry Road, ABC 15 reported. The Uber was heading north and the woman was crossing from west to east when she was hit.  You can view the location on Google Maps here. The vehicle was traveling 38 mph. Police said the speed limit was 35 mph, but a Google Street View shot of the road from July showed a speed limit of 45 mph.

Moir faulted Herzberg for crossing outside the crosswalk. But others have said that the area sends mixed-messages to pedestrians, since it has a brick-paved walking path that stretches across the median, and a sign warning pedestrians not to use the path.

Some people have noted that the pedestrian killed by the Uber test vehicle could have walked 100 yards and crossed at a controlled intersection. THIS is the intersection. pic.twitter.com/qiBdZ4RIZs

A super-weird aspect of this crash site is that it occurred at a place where a beautiful brick-paved diagonal walking path was provided across the median, along with a sign instructing people not to use it. This is beyond pedestrian-hostile design; it's damn-near entrapment. pic.twitter.com/ZaHw9bIIrR 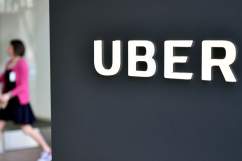 Loading more stories
wpDiscuz
0
0
Would love your thoughts, please comment.x
()
x
| Reply
Rafaela Vasquez was the back-up driver in the deadly self-driving Uber crash that killed a pedestrian in Arizona.