Kimba Wood, the federal judge presiding over the Michael Cohen legal battle, was Bill and Hillary Clinton’s choice for Attorney General, and she has a colorful past. Once dubbed the “love judge” by the New York press, she had a short stint training as a Playboy bunny.

Wood’s tie to the Clintons, in particular, has generated controversy as she presides over the battles surrounding attorney-client privilege claims in the investigation of Cohen, President Donald Trump’s personal attorney. Wood, a Ronald Reagan appointee to the federal bench, ruled that Cohen’s lawyer can review a trove of documents seized from his office; Wood also ordered Cohen’s lawyers to identify a client of his, who turned out to be Fox News host Sean Hannity.

1. Bill Clinton Once Wanted Wood to Be His Attorney General & Hillary Clinton Was Involved in the Process

According to her Federal Judicial Center biography, Kimba Maureen Wood was nominated to the federal bench in the southern district of New York by Ronald Reagan in 1987. She was confirmed by the Senate on April 19, 1988, served as chief judge, and “assumed senior status on June 1, 2009.”

She was nominated to the federal bench by Sen. Alfonse D’Amato (R-N.Y.), who praised her as a “legal scholar.”

However, she also has ties to the Clintons.

Some may remember the series of “nanny-gate” problems that did in some of Bill Clinton’s nominees to be his Attorney General. One of those nominees was Zoe Baird. Another was Kimba Wood. According to a Washington Post story from 1993, Hillary Clinton was integrally involved in the choice.

“The First Lady interviewed Wood for 90 minutes, twice as much time as the president spent with his prospective chief legal officer,” The Post reported at the time. The Post added that Wood, at the time, was “unfamiliar with criminal law and lacked any courtroom lawyer experience before being named to the bench in 1988.”

The article noted, “her friendship with Susan Thomases, a Hillary Clinton confidante who works hard to keep Bill Clinton on the left.” Hillary Clinton had pressed her husband to select a woman for the court, reported The New York Times. 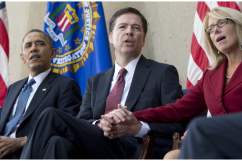 Kimba Wood’s nomination was derailed when it was revealed she had employed an illegal immigrant babysitter. When the revelation came to light, she withdrew her nomination to become Bill Clinton’s Attorney General.

The New York Times reported at the time that there was no evidence of illegality on Wood’s part. However, Clinton’s first choice for the post – Baird – had stepped aside after a similar controversy, so it was feared that Wood’s nomination would not survive the negative publicity.

The Times reported that Clinton was upset that Wood had not disclosed the babysitter issue to him even when asked. The babysitter was from Trinidad and worked for Wood for seven years, according to The New York Times, which stated that Wood insisted “she did not act illegally because her baby sitter was hired in March 1986, several months before the enactment of a Federal law making hiring of illegal aliens unlawful.”

Wood first burst into the public eye in 1990. That was the year when “she sentenced convicted junk-bond king Michael Milken for violations of securities laws,” reported The Connecticut College Magazine in 1994. “Her sentence of a 10-year prison term raised as much controversy as her later decision to grant Milken parole after he had served only two years in jail.”

“She graduated from Harvard Law School when only six percent of her class was female,” the profile story noted. Her Federal Judicial Center biography states that Wood graduated from Connecticut College for Women (now Connecticut College), London School of Economics and Political Science, and Harvard Law School. In addition to her time in the judiciary, she worked as an attorney in the Office of Economic Opportunity, Washington, D.C.

3. Wood Once Trained as a Playboy Bunny & She Was Named After an Australian Town

“Judge Wood had briefly trained as a Playboy bunny years ago when she was a student in London,” The New York Times reported, adding that Clinton officials “feared that that might become the source of jokes.”

The New York Daily News reported that Wood “briefly worked at a Playboy casino in 1966.” Time Magazine reported that the stint was a short one: “in the mid-1960s, a then cash-strapped Wood trained five days to be a bunny at a London Playboy Club.” However, some news sites report that Wood quit the gig because she considered it silly.

According to Connecticut College Magazine, Kimba Wood “was born on January 2, 1944, in Port Townsend, Washington. Her mother chose her unusual first name after searching through an atlas for suggestions, settling upon the pleasant sound of a small town in Southern Australia.”

Her father wrote speeches for Army generals and the family moved among military bases, the profile noted, adding that Wood spoke French before she did English.

4. Wood Was Famously Dubbed the ‘Love Judge’ After a Romantic Scandal

Judge Kimba Wood in the Michael Cohen hearing today has ruled that Cohen's lawyers and Trump's lawyers can have the first look at all the seized documents and make a case for attorney-client privilege for portions of the material. pic.twitter.com/asCX6iyNSt

Wood has a earned a colorful moniker: The “Love Judge.” This nickname derived from a romantic scandal involving her. According to The New York Daily News, in 1995, a “multimillionaire Wall Street financier’s” estranged wife “found his diary, which was filled with passionate prose about his trysts with the jurist.”

Frank Richardson was the financier involved, and, according to the New York Daily News, he described Wood as “absolutely wonderful, very intelligent, a complete woman and able to give love wonderfully and freely.”

Wood was married to a columnist from Time Magazine, Michael Kramer (with whom she had a son, Ben) but was in the process of getting a divorce, Daily News reported. Another passage in Richardson’s diary allegedly read, “When I first took her head and kissed her lips . . . . How she stiffened and gave slowly, but inexorably,” the Daily News reported.

Richardson and Wood married in 1999.

5. Wood Presided Over the Wedding of George Soros & Was Once Called a ‘Life-Long Democrat’

Fueling some of the conservative anger at Wood: She performed the non-denominational wedding ceremony of liberal financier George Soros to Tamiko Bolton in 2013. Nancy Pelosi was among the guests, Page Six reported.

Wood herself was also married to a lawyer named Jesse Lovejoy, making Richardson her third marriage.

In a profile story on Wood, The New York Daily News, in 1995, said that Wood’s ascendancy to the federal bench raised some eyebrows because “Wood had no criminal experience at the time D’Amato nominated her for the judgeship and, as a life-long Democrat, she could hardly be said to share D’Amato’s views.”

Edward Friedland, a district court administration, released a statement decribing Wood’s ties to Soros. “From time to time, but rarely, Judge Wood and her husband came across George Soros at large social gatherings that had nothing to do with politics,” he wrote. “When he asked Judge Wood to perform his wedding, she did so. Judge Wood has performed over 40 marriage ceremonies during her time as a judge.”

UK Daily Mail noted: “Her husband, financier Frank Richardson, once served on an investment advisory committee for a company owned by Soros.”