For her part, Auld has an interesting biography of her own: She is a former Miss South Dakota, an author, and a toy store owner. Tom Brokaw and his wife are also grandparents.

#brokaw50 #tbt Dad and Mom with “the hooligans” at the #americanprairiereserve pic.twitter.com/KhKysNgxt2

Brokaw, 78, was belatedly accused in April 2018 by two women of decades-old sexual harassment, allegations he has vociferously and emotionally denied. Linda Vester, a former war correspondent for NBC, alleged that Brokaw “physically tried to force her to kiss him on two separate occasions, groped her in a NBC conference room and showed up at her hotel room uninvited,” Daily Variety reported.

Brokaw made an emotional statement in an email to co-workers and friends in which he denied making overtures toward Vester and referenced his family. “My family and friends are stunned and supportive,” he wrote in an email to co-workers and friends. “My NBC colleagues are bewildered that Vester, who had limited success at NBC News, a modest career at Fox and a reputation as a colleague who had trouble with the truth was suddenly the keeper of the flame of journalistic integrity.” He also wrote: “I am not a perfect person. I’ve made mistakes, personally and professionally.”

Here’s what you need to know about Tom Brokaw’s family:

1. Brokaw’s Daughter, Jennifer, Worked as a Doctor in San Francisco

Tom Brokaw and his wife have three children. According to Biography.com, “the couple has three daughters, Jennifer, Andrea and Sarah.”

Jennifer Brokaw has worked as an emergency room physician in San Francisco who has helped her father during his battle with cancer, The Today Show reported.

In 2013, Brokaw was diagnosed with multiple myeloma, although his cancer is in remission. He’s said his daughter Jennifer was very helpful to him because of her medical background.

“If you have cancer, in a way your whole family gets cancer because they’re involved in it,” he said to Today. He told Today that Jennifer “was invaluable to me because she knew what questions to ask, what research to look for, how to get on the phone with me.”

Jennifer has her own website, which reads, “Dr. Jennifer Brokaw worked for fourteen years as a board-certified emergency physician before founding Good Medicine, a private medical consulting and advocacy practice in San Francisco.” Her Twitter profile reads, “Mother of women, was Emerg Med, now a patient advocate who cares about end of life. I tweet about all of the above, but lately, politics and politicians.”

2. Brokaw’s Daughter, Sarah, Is an Author Who Has Blogged About Her Parents’ Marriage

Sarah Brokaw is “a Los Angeles-based licensed therapist and the New York Times bestselling author of Fortytude: Making the Next Decades the Best Years of Your Life — through the 40’s, 50’s and Beyond,” according to The Women on the Fences website.

In a guest blog on the site Women on the Fence, Sarah Brokaw wrote about her parents’ marriage. “On August 17th, 1962, Tom Brokaw and Meredith Auld wedded in Yankton, South Dakota, on the hottest day of the year,” she wrote.

“Even so, 150 of their friends and family filed into the un-air-conditioned church to witness the nuptials between my mother, the reigning Miss South Dakota, and my father, the loquacious and witty charmer.”

She described in the blog post how her mother proposed even though she could have had more eligible bachelors at the time and how Brokaw asked her parents’ permission. She concluded, “While I am so blessed to have observed the beautiful and indestructible bond that my parents have built over the past 49 years, I still wonder how my parents’ marriage withstood the toughest of times over the years.”

Her 2004 wedding announcement in The New York Times said that Andrea Brokaw was working for Warner Brothers Records as a vice president of marketing. On Twitter, Andrea, who goes by Andie, calls herself “music bizzer…video gamer…mom.”

She married Charles Simon, described in the wedding announcement as a deputy director of criminal justice for New York State who focused on drug and firearms crimes. They were married by Kimba Wood, the federal judge now presiding over the investigation into Donald Trump’s lawyer, Michael Cohen. Andrea Brokaw frequently posts photos of her children on Twitter and Instagram and occasionally of her father.

#tbt #brokaw50 A man of many skills, @tombrokaw is also excellent at pulling out loose baby teeth! pic.twitter.com/8nJLYIJF6w

On Twitter, Andrea sometimes makes political commentary. For example, in 2017, she wrote, “It’s time for @lexus, and @JennyCraig to drop the @oreillyfactor.” She also has retweeted comments harshly critical of President Donald Trump. For example, she shared one news article on Twitter and wrote, “Liar liar pants on fire! Trump says he has ‘nothing to do with Russia.’ Thirty years of history shows otherwise. TWP.” 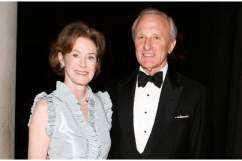 4. Brokaw Said Cancer Deepened His ‘Awe’ of His Wife

Journalist Tom Brokaw and wife attend the Museum of Modern Art re-opening party for friends and supporters on November 18, 2004 in New York City.

Brokaw has lavishly praised his wife in news media interviews. One of those interviews came after Brokaw was diagnosed with cancer.

At the time he spoke about Auld in 2015, he had already been married to Auld for 52 years. He described to Parade Magazine how he and Meredith had been have “married a long time. This cancer experience has just deepened my awe of her. It’s hard for me to say I love her more. This has deepened our relationship. We’ve always cared about each other a lot, but I so depended on her through this.”

In an interview on The Hoda Kotb Show, Brokaw revealed when he told his wife that he had cancer. He said that he told Meredith the news at the family’s Montana ranch, and she responded clinically, asking him a series of question about what the diagnosis meant.

Tom Brokaw and wife Meredith attend the 2008 Stand Up For Heroes: A Benefit for the Bob Woodruff Foundation at Town Hall on November 5, 2008 in New York City.

Around age 19 or 20, Brokaw recalled to Parade Magazine, he was a college dropout “hitchhiking across the Midwest,” and his listlessness concerned his parents – and Meredith Auld.

Tom Brokaw (R) and his wife Meredith Lynn Auld watch Serena Williams in her match against Flavia Pennetta of Italy during day nine of the 2009 U.S. Open at the USTA Billie Jean King National Tennis Center on September 8, 2009 in the Flushing neighborhood of the Queens borough of New York City.

“My parents were anxious about how I was going to turn out. But I look back and see that was the Brokaw luck because I learned a big, painful lesson about how easy it is to fail,” he told the magazine. “It also brought Meredith and me together because she wrote me the hardest possible letter you can imagine, about ‘you’re going nowhere and I never want to see you again and nobody can understand what the hell is going on with you.’ That was a wake-up call.”

In 2006, Meredith Auld co-authored a cookbook titled Big Sky Cooking. The blurb with the book on Amazon.com describes how Meredith and Tom Brokaw were drawn to the vastness of Montana, where they bought a ranch.

“Meredith and Tom Brokaw could feel the attraction all the way from their home in New York City,” the blurb reads. “Native South Dakotans, they had settled into a frenetic Manhattan lifestyle, tempered by frequent visits to Montana, until Tom could no longer resist. He convinced Meredith to join him in buying a ranch north of Yellowstone.”

The book jacket continues: “Meredith, in turn, convinced her friend, passionate cook Ellen Wright, to come and discover for herself the bounty of the region—its trout, bison, and elk; locally raised poultry; native fruits and vegetables.”

According to Andrea’s wedding announcement, Meredith Auld was “vice chairwoman of Conservation International in Washington, a trustee of WNET, Channel 13, in New York, and was until 1998 the owner of Penny Whistle Toys, which operated stores in New York.”

Brokaw and his wife have a net worth of $80 million.

5. Brokaw’s Mother Grew Up in a ’20th Century Version of Little House on the Prairie’

Tom Brokaw was born in 1940, in Webster, South Dakota. “The eldest son of a construction worker and a post office clerk, Brokaw graduated from the University of South Dakota with a degree in political science in 1962,” Biography.com reports.

Brokaw’s mother was named Eugenia Conley Brokaw. According to her 2011 obituary, “She was ‘Grandma Jean,’ a powerful and wise influence on five grandchildren and a niece.” Brokaw’s father, Anthony “Red” Brokaw, died in 1982, the obituary reads.

“They had been married since 1938 and lived in several communities in their home state of South Dakota and the midwest during Red’s career as a skilled operator of heavy construction equipment,” says the obit.

“During her California years, Jean continued her association with P.E.O. and became an enthusiastic fan of the Los Angeles Lakers, and the California Angels. She was a regular at weekly bridge games in the retirement community of Laguna Woods and traveled widely, taking trips to Europe, through the Panama Canal, Hawaii and along the Alaska Coast Line.”

Brokaw’s mother “Jean began life on her father’s small farm in northern South Dakota where she lived the 20th Century version of little house on the prairie. She often recalled the joys and virtues of being self reliant from an early age when she helped with the harvest and daily chores,” says the obituary, adding that she wanted to become a journalist but couldn’t afford it.