Amy Caprio is the police officer who was tragically killed in the Perry Hall region of Baltimore on Monday, the Baltimore Sun reported. She was responding to a call about a suspicious vehicle in what is normally a quiet neighborhood, residents and media sources shared. Four suspects have been arrested in connection with her death, including Dawnta Harris, 16, who was charged with first degree murder and will be tried as an adult, CBS Baltimore reported. Harris had told police that he was waiting in his car while the people with him were committing a burglary. The other three suspects might be charged with felony murder. Caprio was just days away from leaving for a vacation with her husband, where they were going to celebrate their birthdays and their third anniversary.

Here is what we know so far about the shooting and Amy Caprio. This is a developing story.

1. Amy Caprio , a Four-Year Veteran, Was Responding to a Call About a Burglary in Progress When the Suspect Drove Straight for Her

Our thoughts and prayers are with family, friends and colleagues of Police Officer Amy Caprio #EOWMay212018 @BACOPoliceFire pic.twitter.com/PYH2E9vGz5

Officials said that she would have been a four-year veteran this July.

The suspects fled the scene and were at large, but they are now all in custody. Dawnta Harris is charged with first degree murder and will be tried as an adult, officials said. Harris has a record of car theft in the juvenile system and had been arrested multiple times before, CBS Baltimore reported. The other three suspects, who are also in custody, may be charged with felony murder and all crimes that happened while they were committing the burglary, officials said.

According to police records, Dawnta Harris was waiting in his Jeep Wrangler while the people with him were committing a burglary. He tried to flee when he saw Caprio arrive, but drove down a cul-de-sac and had to turn around in Linwen Way. He said that Caprio followed him, exited her car, and ordered him to leave the car. He said that he partially opened his door, but then shut it and drove at Caprio. He later left the Jeep on Dawnvale Road.

Witnesses said that Caprio pulled over a vehicle, pulled her gun, and the vehicle accelerated. Witnesses then said they heard a shot, and the vehicle ran over the officer, WBAL-TV reported. According to WBAL-TV, a source close to the case said that her body cam footage showed her standing in the street as the vehicle was driving toward her. She fired one shot while the car was driving straight at her, was hit, and thrown, reported WBAL-TV. On Tuesday, a medical examiner found that she had died of major trauma to the head and torso. Her death was ruled a homicide.

Tony Kurek, who lives in Perry Hall, told the Baltimore Sun that the officer was killed right outside his home, and his son tried to save her life. He said he had just walked inside his Perry Hall home when his son told him that a cop was run over. Dakota Kurek, 20, said he saw the officer draw her gun on a black Jeep Wrangler and order the people inside to get out of the car. But the driver sped forward and hit the officer instead. She landed 20 feet away. He called 911.

Tony’s other son, Logan, is a volunteer firefighter. Logan, 23, began doing CPR. He was afraid that she was already gone. “Her eyes were wide open,” Tony told the Baltimore Sun. “I had a very, very bad feeling that she was going or gone.”

Residents in the area were told to shelter in place on Monday, WBAL-TV 11 reported. Local schools were also placed on lockdown as a precaution, including Perry Hall Elementary, Oaks Elementary, and Gunpowder Elementary. The schools were held over due to police activity in the area.

Perry Hall Elem, 7 Oaks Elem, & Gunpowder Elem are being held over on alert status due to active police activity in the area. These schools WILL NOT be dismissed at this time. DO NOT attempt to respond to the school. Call school administrators for further instructions. ^jzp

Some local schools even had to serve dinner to their students while they remained on alert status Monday night. As of nearly 7 p.m. Eastern on Monday, more than 1,900 Baltimore students were still sheltered in place at their schools, not able to leave as police searched for the suspect, the Baltimore Sun reported. By 10 p.m. Eastern they had been allowed to go home.

2. She Loved Dogs, Always Kept Treats on Patrol, & Her Family Has Asked that Donations Be Made to the Humane Society of Harford or the Police Assistance Fund

Amy Caprio loved dogs. In fact, she loved them so much that she always had treats with her when she was on patrol, CBS Baltimore reported. She also loved the outdoors, kayaking, and mountain biking.

Her family asks that in lieu of flowers, contributions in Amy Sorrells Caprio’s memory be made to the Humane Society of Harford County or the Police Assistance Fund.

3. She & Her Husband, Tim Caprio, Were Supposed to Leave for a Week’s Vacation This Weekend to Celebrate Their Birthdays and Third Anniversary

Amy Caprio was married to Tim Caprio, the Baltimore Sun reported. A man who identified himself as her husband spoke on a radio morning show on Tuesday. “I’m just still grieving,” he said. “I just feel like talking about it is definitely better than not.”

According to her obituary, she was just six days away from celebrating her birthday.

To add to the senseless tragedy, she and her husband were supposed to leave for a week-long vacation starting this weekend, CBS Baltimore reported. They were going to celebrate their birthdays and their third anniversary.

Chief Sheridan said in a press conference: “He (Harris) did an act which impacts a family, a spouse, brothers and sisters in law enforcement–the institution. That young man has done an act in which he should be treated as an adult.”

4. Caprio Solved  a Series of Package Burglaries in Baltimore County  & Was Recently Named Officer of the Month

Caprio solved a series of package thefts in December and January, the Baltimore Sun reported. She reviewed security camera footage, interviewed witnesses, and compared notes from other package thefts in the region. She was able to track down two suspects who were linked to dozens of stolen packages in the region. The suspects’ hotel room was filled with stolen goods, including a quilt with a special inscription to a woman’s granddaughter. She was named officer of the month in December for her work.

5. Amy Caprio, Described as Smart, Kind, & a Future Leader, Was the 10th Baltimore County Officer to Die in the Line of Duty in Nearly 150 Years

Amy Caprio died just six days before her birthday, according to her obituary. A viewing for the officer will take place on Thursday, May 24 at Schimunek Funeral Home, 9705 Belair Rd. in Perry Hall. Her funeral is scheduled for Friday, May 25, at Mountain Christian Church, 1824 Mountain Rd., in Fallson. A service at Dulaney Valley Memorial Gardens will take place after the funeral.

She had a bachelor’s degree from Towson.

Baltimore County Police Chief Terrence B. Sheridan said “She was the kind of officer you’d want to hire.” He said she was smart, kind, and a future leader. You could see her potential.

She was the tenth Baltimore County officer to die in the line of duty in the department’s almost 150-year history, the Baltimore Sun reported. The last death in the department was Officer Jason Schneider, 38, who was fatally shot while serving a warrant in 2013.

Gov. Larry Hogan shared his condolences about the passing of the police officer in a message on Twitter. He said, “We are deeply saddened to learn of the passing of a Baltimore County Police Officer after she was shot in the line of duty today. Our prayers go out to this brave officer’s family, @BACOPoliceFire, and the Baltimore County Community.”

We are deeply saddened to learn of the passing of a Baltimore County Police Officer after she was shot in the line of duty today. Our prayers go out to this brave officer's family, @BACOPoliceFire, and the Baltimore County community. 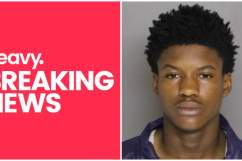 Loading more stories
wpDiscuz
0
0
Would love your thoughts, please comment.x
()
x
| Reply
Baltimore officer Amy Caprio was killed while responding to a burglary. She was supposed to leave this weekend to celebrate her birthday and anniversary.