In addition to providing direct commentary on Trump’s joint press conference with Putin on Monday (which was called ‘treasonous’ by former CIA director John Brennan), the cartoon is an apparent throwback to Trump’s comment during his 2016 presidential campaign when he claimed he could shoot someone on Fifth Avenue and still not lose any supporters.

.@realdonaldtrump derides reports with which he disagrees as “fake news,” then buys the Russian narrative hook, line, sinker, pole and boat. https://t.co/TGHurpVDKy

Of the cover, The New York Daily News said via Twitter, “@RealDonaldTrump derides reports with which he disagrees as “fake news,” then buys the Russian narrative hook, line, sinker, pole and boat.”

The cover story to accompany the cartoon is titled ‘Putin’s Poodle: Trump sells out U.S. intelligence agencies with the world watching”.

Trump’s decision to defend Putin’s innocence over his own intelligence community’s assessment of Russian interference in the 2016 election inspired outrage and shock from politicians and media outlets alike, especially given the recent indictments by Special Counsel Robert Mueller of 12 Russian Nationals for the hacking of Democrat emails.

Fox News Host Neil Cavuto said of Trump’s inability to challenge Putin to never interfere with an election again, “But he didn’t [challenge him]… And that’s what made it disgusting, that’s what made his performance disgusting. I’m sorry, it’s the only way I feel. It’s not a right or left thing to me, it’s just wrong.”

Trump’s behavior at the Helsinki summit left politicians on either side of the partisan aisle outraged. Senator John McCain (R-AZ) described Trump’s actions as “one of the most disgraceful performances by an American president in memory.”

House Speaker Paul Ryan said, “There is no question that Russia interfered in our election and continues attempts to undermine democracy here and around the world. That is not just the finding of the American intelligence community but also the House Committee on Intelligence.”

Even Senate Majority Leader Mitch McConnell drew a line in the sand, saying, “I’ve said a number of times and I say it again, the Russians are not our friends and I entirely believe the assessment of our intelligence community.”

Trump Viewed His Press Conference as a Victory of Forward Movement

In a series of tweets following the joint press conference with Putin, Trump doubled down on his belief that a partnership with Russia was the way to a “brighter future.”

He tweeted, “As I said today and many times before, ‘I have GREAT confidence in MY intelligence people.’ However, I also recognize that in order to build a brighter future, we cannot exclusively focus on the past – as the world’s two largest nuclear powers, we must get along!”

Following that tweet, he released two images with a quote from him inset (as seen above and below), both of which served to underscore how he saw his diplomacy with Russia fitting in with international politics.

A productive dialogue is not only good for the United States and good for Russia, but it is good for the world. #HELSINKI2018 pic.twitter.com/Q2Y1PhM9au

Trump then confirmed that he would be doing an interview with Sean Hannity and Tucker Carlson, both of Fox News. 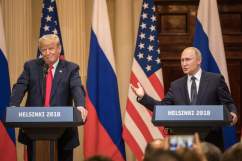