Actress Roseanne Barr sat down with Fox News host Sean Hannity Thursday, July 26th in her first televised interview since an offensive tweet prompted ABC to cancel her popular sitcom. In the tweet, Barr referred to former Obama aide Valerie Jarrett, who is African-American, as an ape.

Before the interview aired, Hannity told Variety, “Nothing is off the table. I think it’s an opportunity for Roseanne to explain what had happened.” Hannity devoted his entire program to the Roseanne Barr interview.

.@therealroseanne on her initial reaction to the blowback from her controversial tweet: "The first thing was shock that they were saying it was racial, when it's political." #Hannity pic.twitter.com/gGv06LsmLO

In the first part of the conversation, she argued that the tweet aimed at Valerie Jarrett was meant to be political. She said she was stunned that so many people saw it as racist. Barr told Hannity, “I will always defend Israel… The tweet was about asking for accountability from the previous administration about the Iran deal. That’s what was in my head.” Barr stressed that it hurt her to think that some people viewed her as racist, especially because she has African-American members of her family.

Hannity repeatedly brought the interview back to the May 29 tweet, asking how she didn’t know that it was a bad idea to post it. He brought up the fact that negative reaction to the tweet had been “universal.” Barr responded, “I made a mistake, obviously. It cost me everything. I paid the price for it.”

.@therealroseanne: "Now I feel like both the left and the right have marginalized the middle, and it's just too crazy." #Hannity https://t.co/elzaLqjkzV pic.twitter.com/RLGk6Vz2Dq

Hannity then asked Barr to directly address Jarrett. Barr said, “Let’s talk about it. Let’s turn it into a teachable moment. Let’s talk about race… Don’t assume you know what I meant… Let’s try to find common ground.” Barr repeated her claim that she did not know Jarrett was African-American. Barr said she was focused on Jarrett’s Iranian heritage, and that the aggressiveness of the tweet had to do with anger over policies in Iran and defensiveness for Israel.

Hannity asked Barr if she’d like to apologize directly to Jarrett, and seemed to be encouraging the actress to do so. Barr eventually did. She turned to the camera and said that if Jarrett was listening, “I’m so sorry if you thought I was racist or you thought my tweet was racist because it wasn’t. It was political… I’m sorry if you felt hurt or harmed. And for that I apologize. I never meant to hurt anyone.”

.@therealroseanne's message to Valerie Jarrett: "I'm sorry that you feel harmed and hurt. I never meant that and for that I apologize." #Hannity https://t.co/58BA7ZwIX7 pic.twitter.com/2r1HM4TBGH

The interview also addressed Barr’s health issues. Hannity asked her if she had ever been institutionalized. Barr responded, “Honey, that’s like going to the beach for me, I’ve been hospitalized a lot.” During this segment of the interview, Barr also stated that she does not “suffer” from multiple personality disorder, but that she enjoys it. “I know I’m a creative genius… that part of your brain is very close to the madness.”

In the second portion of the interview, Roseanne Barr stated that she wants Americans to know who she is, and also mentioned President Trump. She told Hannity, “I’m somebody who cares about civil rights. You call me racist, and I don’t accept that. I know who I am… people who voted for Donald Trump aren’t racist, and neither is Donald Trump.”

Roseanne Barr also claims she had a clause in her contract to protect her when she made controversial statements. Barr says ABC was supposed to give her 24 hours to correct the mistake, but that the network did not allow that to happen. She acknowledged that she felt bad about costing other people their jobs when Roseanne was cancelled, which is why she approved the spin-off of her sitcom.

The Fox News appearance was an opportunity for the comedienne to directly address a massive audience. Hannity’s program is the most popular news show on a cable network, averaging about 3.3 million viewers.

On May 29th, Barr responded to a post about Valerie Jarrett, a former top adviser to President Obama. Another user had accused Jarrett of covering up alleged “misdeeds” by the Obama administration. Barr contributed to the thread:

“Muslim brotherhood & planet of the apes had a baby=vj.”

The backlash was angry and swift. Barr’s Roseanne co-stars were among those who condemned the comment on social media. Hannity himself was among those who publicly criticized Barr for her post.

Barr apologized with another tweet, but the damage was done. ABC called the tweet “abhorrent, repugnant and inconsistent with our values.” Within hours, the network announced that it was cancelling the second season of the popular reboot. In the weeks that followed, the network announced a spin-off called The Conners that would not include Barr.

In the weeks following the firing, Roseanne avoided media appearances. Instead, she chose to express herself on her Youtube page. In a video published July 20, she accused the “filter of the biased media” of twisting her words. She claims the May 29 tweet was not intended as racist, because at the time, she thought Valerie Jarrett was white. Barr says she told ABC that she wanted to go on a media tour to explain herself, but that the network was unwilling to give her that opportunity. She claims all of this happened “because I voted for Donald Trump and that is not allowed in Hollywood.” 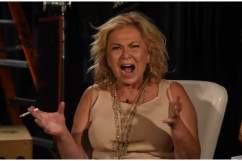 WATCH: Roseanne Barr: ‘I Thought The Bitch Was White!’