Cindy McCain, John McCain’s wife, is extremely wealthy in her own right. In fact, she is far richer than her husband was, despite his public profile.

U.S. Senator John McCain was a very wealthy man when he died, but most of his money derived from his wife, Cindy, who is the heiress to a beer fortune.

John McCain died on August 25, 2018 at the age of 81 after a battle with brain cancer. He was with his wife, Cindy, and his family when he died, according to a statement from his office.

Cindy McCain’s net worth in 2018 was placed at $300 million by Celebrity Net Worth. Much of that wealth comes from her family’s beer distribution company, Hensley & Co, for which she serves as Chairwoman.

1. Most of the Couple’s Wealth Was Cindy McCain’s Fortune

Almost all of John McCain’s wealth comes from his wife.

According to the Atlantic, in 2014, 94 percent of John McCain’s wealth came from spouse-owned assets.

McCain, 80, announced on July 19, 2017 that he had a brain tumor known as a glioblastoma. McCain had his own wealth. Many sites that estimate celebrity net worth put McCain’s net worth at around $23 million. However, this vastly underestimates his family’s wealth due to wife Cindy’s holdings.

John McCain’s own personal wealth might be greater, but he spent his entire life in public service, first serving in the Navy for 22 years (and spending five of those years as a Vietnamese prisoner of war). He has served in Congress since 1982.

The Center for Responsive Politics, which uses politicians’ required finance disclosures to estimate their net worth, reports that McCain had a net worth of just over $19 million, making him the 11th richest U.S. Senator.

Cindy McCain’s wealth is inherited, and it dwarfs that of her husband. John McCain’s finance disclosure reports indicate some of her wealth is held independently of him. She has a lot of it.

Cindy inherited a “Phoenix beer distributorship that is worth hundreds of millions of dollars,” reported The New York Times. Sites that estimate celebrity net worth often peg Cindy’s net worth at more than $100 million – and as noted even as high as $300 million – although no one knows the exact amount.

The Times reported that Cindy’s father started the business, Hensley & Company, “a half-century ago,” and it was the “exclusive wholesaler of Budweiser, Bud Light, and other Anheuser-Busch products in the Phoenix area.” The newspaper reported that the company was the third largest Anheuser-Busch distributor in the United States.

Cindy owns 34 percent of the company and, with her children and other family members, controls 2/3rds of the company’s stock, reported The Times.

According to NPR, “The company, which distributes brands including Bud Light and Budweiser” had a “60 percent share of the Phoenix market and had $370 million in revenues” one recent year. 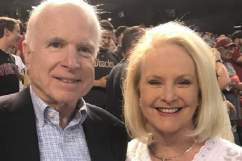 3. The Couple Had a Prenuptial Agreement

Cindy McCain has taken steps to protect her fortune, even as her husband’s net worth declined. According to The Center for Responsive Politics, John McCain’s wealth has been on the decline. In 2006, the senator was worth an estimated $36 million, the site says. However, the senator is only required to submit ranges for his wealth.

NPR reports that Cindy and John McCain signed a prenuptial agreement when they married in 1980. “Cindy Hensley met John McCain more than 20 years earlier at a party in Hawaii. He was a 43-year-old naval officer, married at the time. She was 25,” a 2008 NPR story read.

John McCain initially worked for his father-in-law and then ran for Congress with loans from Cindy, reports NPR. The couple has filed separate tax returns in past years, and their exact finances are a bit mysterious due to Cindy’s penchant for privacy, according to NPR.

4. Cindy Took Over Majority Control of the Family’s Company in 2000

In 2000, Cindy McCain “inherited majority control and became chair of Hensley & Co. when her father passed away,” according to Celebrity Net Worth, which reports: “The company does more than $400 million per year in revenue and employs 1200 people. Hensley is the third-largest Anheuser-Busch distributor in the United States and one of the largest privately-owned companies in Arizona.”

John McCain also brought some money into the partnership.

Most of the entries deal with McCain’s wife’s holdings. Some interesting tidbits from the McCain report:

He has multiple checking accounts. One has at least $100,000 in it. His wife has a property in La Jolla, California that is held independently and worth more than $1 million. Cindy McCain has an interest in everything from a parking garage to a professional baseball team. Cindy McCain has pages of securities and other investments.

5. The Couple’s Children Are Also Worth Millions

The McCains’ finances fell under scrutiny when he ran for president, and it was widely reported that most of his wealth derived from his wife. The couple’s children hold a lot of the wealth too.

In one recent finance disclosure, “The Cessna jet is owned by Cindy and the children. The millions in cash tucked away in savings and checking accounts? Solely Cindy’s. The investment fund shares worth between $2.7 million and $5.8 million belong to the children,” reported ABC News.

“The residential and commercial Arizona rental properties and undeveloped land belong to Cindy. The house in La Jolla, Calif. is Cindy’s, while she shares a $1 million-plus investment property in Coronado with her dependent children,” ABC reported.

John and Cindy McCain have four children together. He also has three children from his first marriage.