Getty 25-year-old Molly Wright intentionally drove into a car after finding out the driver had voted for Trump.

A Massachusetts woman was so annoyed by a car with a Donald Trump bumper sticker that she intentionally drove into it. The woman, 25-year-old Chloe Wright, reportedly hit another car several times after finding out the driver had voted for Trump.

According to the police report acquired from The Cape Cod Times, an unidentified man said that he was driving in Barnstable when the car behind him began beeping. When he pulled over, Wright asked him if he had voted for Trump.

To CBS News, he said, “I could hear her screaming out of the car or something, so I thought man maybe something’s wrong with my car. I get out, all of a sudden I hear, ‘you’re racist’ a bunch of cuss words.”

Via his written statement, the man continued, “She said, ‘You voted for Trump?’ I said yes. She called me a racist and several other names.”

The men then claimed that he began recording the incident on his phone. She in turn drove around his car then drove straight for him, prompting him to jump back into the car. He continued, “She bent my door and I had to lean back to avoid getting hit. She also hit the side of my car.”

“Her tire was right next to my foot,” he added to CBS News. “That could have ended really bad.”

The incident technically occurred on June 30, but Wright was only taken into custody a month later after being arrested for assault with a dangerous weapon. She has pleaded not guilty to charges of vandalizing property and fleeing the scene of property damage.

This is a breaking news post and will be updated as more information is released. 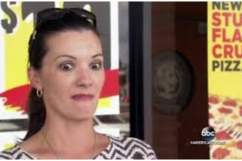 Loading more stories
wpDiscuz
0
0
Would love your thoughts, please comment.x
()
x
| Reply
A Massachusetts woman intentionally caused a car accident after seeing the car in front of her was sporting a Donald Trump Bumper Sticker.