President Donald Trump, just before midnight on a Friday night, wrote a tweet that had Twitter asking, “Who’s Mike?” You can see some of the reactions, including memes, GIFs, and Twitter comments below.

In the late-night tweet on August 3, 2018, Trump bashed both basketball great Lebron James and CNN host Don Lemon. “Lebron James was just interviewed by the dumbest man on television, Don Lemon. He made Lebron look smart, which isn’t easy to do. I like Mike!” Trump wrote. Here’s the tweet:

Lebron James was just interviewed by the dumbest man on television, Don Lemon. He made Lebron look smart, which isn’t easy to do. I like Mike!

“Who the hell is Mike???” wrote one woman on Twitter. She wasn’t the only one as Twitter flooded with similar comments.

People on social media seized on the seemingly non-sequitur ending to the tweet. So who is “Mike”?

Who dafuq is Mike? pic.twitter.com/M9SYbw08Oa

The prevailing theory is that Trump was referring to Michael Jordan and saying he prefers Jordan to LeBron. Maybe. It’s unknowable, of course.

Mike to @realDonaldTrump about now : pic.twitter.com/VeyxUXBvqK

You had to know Crying Jordan would return.

Mike's reaction when he sees this. pic.twitter.com/790R8FBfR0

“It’s saying it sides with Michael Jordan in Mike/LeBron debates. It was very poorly communicated that, due to the fact he is dumb,” explained one Twitter writer. Wrote another: “It’s clearly Michael Jordan. Or maybe Mike Pence.”

I wonder why
RT @realDonaldTrump I like Mike! pic.twitter.com/LOrIEKS2q1

Another Twitter user explained, “It was a huge Nike ad slogan ‘I want to be like Mike’ how old are you, 12?”

Others pointed out there are a lot of Mikes in Trump’s world. “Mike Pence, Or Mike Flynn Or Mike Cohen?” wrote one baffled Twitter user. A few other theories abounded:

When Donald Trump said “I like Mike,” he meant Dunleavy. pic.twitter.com/r9t6eOoyx3

DT always playing to his bigoted base. (Agree that Mike is great though.) pic.twitter.com/ue6FhtHyTG

Mike Tyson endorsed Trump, and Trump defended him when he was accused of rape. So…

Which Mike does @realDonaldTrump apparently like better than he likes @donlemon or @KingJames?

However, with the basketball reference (LeBron) it seems most likely Trump was referring to Jordan.

“So it was Michael Jordan Trump was referring to? Hahaha, the only ‘Mike’ I could think of was Mike Huckabee and that sure threw me,” wrote one woman.

Some People Still Wanted to Know: Who Is Mike?

Mike Pence when his wife shows him what Trump just tweeted pic.twitter.com/PUUhcSVyab

Bill Kristol, the conservative commentator and Trump critic, was among those asking about “Mike.” He also noted that Trump was watching CNN – his self-described nemesis – late on a Friday night. “Whoa. Donald Trump is watching CNN (!) at 11:37 pm Friday night. Crisis at Fox News! What failing program is on then? Also, who’s Mike?” Kristol wrote.

Others were more succinct:

You mean this mike don't you… pic.twitter.com/vVrDqFBpIM

One woman wrote on Twitter, “I’m watching this right now. Great interview and that school @KingJames started is beyond amazing. Also, Mike who?”

LeBron James Is No Fan of Trump

Of course, LeBron James has been vocal in his dislike of Trump. “The number one job in America … is someone who doesn’t understand the people, and really don’t give a f— about the people,” James previously said in a video about the president.

”When I was growing up, there were like three jobs that you looked for inspiration, where you felt like these are the people that can give me life. There was the president of the United States. There was whoever was the best in sports. And then there was like the greatest musician at the time. You never thought you could be them, but you could grab inspiration from them…It’s not even a surprise when he says something. It’s like, laughable. It’s laughable and it’s scary.”

That might have had something to do with it.

What has Michael Jordan said about Trump, though? When the president rescinded an invitation for the Golden State Warriors to visit the White House, Michael Jordan spoke out in defense of free speech, although he didn’t mention Trump by name. “Those who exercise the right to peacefully express themselves should not be demonized or ostracized,” he told The Charlotte Observer, which added that Jordan said he supports the NBA, the players “and all those who wish to exercise their right to free speech.”

You can read more about LeBron’s Trump comments here: 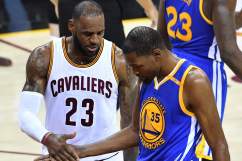 Loading more stories
wpDiscuz
0
0
Would love your thoughts, please comment.x
()
x
| Reply
Donald Trump late-night tweeted "I like Mike" while disparaging LeBron James, causing Twitter memes and reaction to fly, with some asking, Who is Mike?