Facebook A man dressed in scrubs called a black woman the n-word during a racist rant at a Flowood, Mississippi, donut shop in an incident caught on video.

A white Mississippi man who was caught on video calling a black woman the n-word multiple times during a profanity-laced racist rant at a donut shop in Flowood, Mississippi, has lost his job at a local hospital. Kyle Thomas, a radiology technician, was terminated after he video was posted to Facebook on Saturday, a hospital spokesperson told Heavy. The video went viral after it was shared by activists, including Shaun King, on social media.

In the video, Thomas, who was dressed in scrubs, appears to be in an argument with an employee at Donut Palace as another woman films using her cell phone camera. The man turns his attention to the woman filming and tells her “shut your f*cking mouth.” The woman responds, “who are you talking to?” He then replies, “you’re a child, shut up.” She says back, “you’re a son of b*tch, that’s what you are. You don’t speak to me that way.” The man then starts to leave the store telling the employees, “I will be back to talk to your manager,” but then stops and turns back to her.

You can watch the video below (warning – graphic language):

Flowood, Mississippi, is located just outside of Jackson. Donut Palace has not commented about the video.

Ayoka Pond, a spokesperson for Mississippi Baptist Medical Center, where Thomas worked, said in a statement to Heavy, “We are aware of the confrontation captured on video involving one of our off duty employees at a local donut shop. We take this situation very seriously. This employee’s language and behavior does not represent our organization’s values and his employment has been terminated.”

Pond added, “We want our patients, employees, physicians and our community to know that we find the language used in the video to be completely unacceptable and inconsistent with what we expect from employees or anyone associated with our organization. We are committed to a work environment that is inclusive and where everyone is respected and valued.”

Thomas, a 35-year-old Brandon, Mississipp, resident, deleted his social media after he was identified by social media users. Before he deleted his Facebook page, he wrote a statement saying, “I am so sorry, there is nothing I can say that will change what I said. I drove back up there and tried to apologize and she had gone. I regret every word that I said there is no excuse to every say these horrible things. I only hope that by me sharing a public apology in this incident you could show me some grace. I was upset about another issue and it spilled over into this and I can’t apologize enough.”

Thomas could not be reached for comment by Heavy. 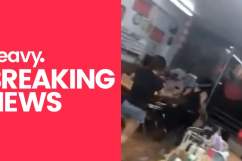 Loading more stories
wpDiscuz
0
0
Would love your thoughts, please comment.x
()
x
| Reply
Kyle Thomas who called a black woman the n-word during a profanity-laced rant at a Flowood, Mississippi, donut shop, has been fired by the hospital where he worked.