When a verified celebrity tweets a meme response, it’s well, huge. And so when Kathy Griffin tweeted to Jeffree Star following the Laura Lee ‘My Apology’ video of Sunday night, thousands and thousands liked, retweeted and sub-tweeted it. Such is the drama unfolding on the world of beauty-Tubers.

This is not garden variety YouTuber infighting. This is about unearthed racist tweets by beauty influencer Laura Lee and subsequent shade thrown at beauty boss Jeffree Star following the revelation. And then Sunday night, after a week of waiting, a video apology came from the 29-year-old Alabama native wherein Lee’s crying and pleading for forgiveness. Only many have questioned her sincerity, authenticity and actual tears.

What you need to know:

In one week, Lee has lost 200,000 subscribers on YouTube. In the aftermath of the leaked tweet where Lee says, “Tip for all black people, if you pull up your pants you can run from the police faster,” her subscriber count has steadily fallen. Many simply wanted the YouTuber, who makes almost a million dollars a year doing videos, to post a video explaining herself. It took almost a week, but she uploaded it Sunday.

Jenna Marbles uploaded a 40 minute apology video for getting the wrong fish tank and Laura Lee uploads a 4 minute video of her fake crying for racist tweets??‍♀️

That it wasn’t well received is likely an understatement.

With her subscriber count dropping she ain’t gonna have any cash LMFAO pic.twitter.com/z8WRWezoF7

We got ONE tear at 4:23 LMAOOO pic.twitter.com/vsKf7ik42V

Lee Tweeted Racist Stuff Six Years Ago & She Was Exposed Last Week. Lee Was Shaded by Jeffree Star, Among Others, For Her Alleged Hypocrisy

Lee, a celebrated make-up YouTuber with previously more than 5 million subscribers and millions more eyes on her channel, was recently embroiled in a racism scandal based on tweets unearthed from 2012. Jeffree Star had his own racism controversy, but scandal over Lee’s alleged racism had the video beauty community of billions outraged. Even loyal fans. “I’ve been a Laura lee fan for years, but that apology video felt so fake and more of a pity party than a genuine apology. And she kept saying “retweets” when the things people found were definitely not retweets!!!”

Laura lee between cuts of her apology video trying to put more water in her body so a tear can finally leave her eye pic.twitter.com/vmD4CnWfpF

And Star’s comments on the matter may, in part, be the reason Lee’s follower count is dropping hourly, per Social Blade. Which can not be a good thing financially for the cosmetics vlogger on the beauty scene for more than five years.

Who made the captions for Laura Lee’s apology video OMFGKSJSJANAK AHAH pic.twitter.com/dtkeppJDZ3

Then she posted her ‘My Apology’ video where she sobs, “I’m sorry. I’m sorry you guys,” clearly addressed to her subscribers and fans. “Six years ago I decided to retweet things that were so vile and hurtful …I have no excuses. I’m only here to say I’m sorry. I can’t even look at myself.” Laura Lee said, in a non-crying voice that her mother and niece have been threatened and begs for people to take out their anger on her not her family.

Within minutes of the upload of the 4-minute video, the memes were born.

Even my version of her apology is more believable pic.twitter.com/HVSX8aqsia

And then there’s ‘Tea Spill’ which has been all over this unfolding drama calling her apology “fake.” 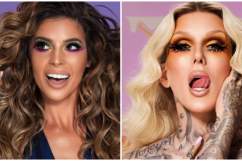