QAnon’s followers have a particular affection for the number 17. The believe that every time Donald Trump references it, he’s really referencing them. It comes from the fact that Q is the 17th letter of the alphabet. QAnon members were notable in the crowd during Donald Trump’s rally in Tampa on July 31.

Trump repeatedly saying he had only been to DC 17 times before he became President… what’s the 17th letter of the alphabet? #QAnon #AskTheQ pic.twitter.com/Xgz8354u7g

You know, I told the story the other day, I was probably in Washington in my entire life 17 times. True, 17 times. I don’t think I ever stayed overnight… Again, I’ve only been here about 17 times. And probably seven of those times was to check out the hotel I’m building on Pennsylvania Avenue and then I hop on the plane and I go back. So I’ve been there 17 times, never stayed there at night. I don’t believe.

During the event, dozens of people could be seen in the crowd making reference to QAnon with signs and t-shirts. The QAnon conspiracy began on 4Chan in October 2017. It began with a mysterious poster named “Q.” That person claimed to be a government agent with ultra top-secret information. That person also said that he or she was on a mission to take down the so-called “deep state.” The official line from Press Secretary Sarah Sanders after the rally in Tampa was, “The president condemns and denounces any group that would incite violence against any individual.”

Trump Also Tweeted About ’17 Angry Democrats’ After the Tampa Rally

The day after the rally in Tampa, Trump again made reference to the number 17 in a Twitter post about the Russia investigation. The message read, “This is a terrible situation and Attorney General Jeff Sessions should stop this Rigged Witch Hunt right now, before it continues to stain our country any further. Bob Mueller is totally conflicted, and his 17 Angry Democrats that are doing his dirty work are a disgrace to USA!” The 17 Democrats was originally 13 Democrats. On July 29, Trump explained that he had expanded the number to 17 to included “an Obama White House lawyer.”

In Apriul 2018, when the University of Alabama football team visited the White House on the back of their national championship winning season, Coach Nick Saban presented Trump with a number 17 jersey. A Reddit thread on the Great Awakening/QAnon subreddit was dedicated to it. The thread was titled, “Why does he keep picking #17 for jerseys? Shouldn’t he pick #45? Is he making it that obvious?” Some argued on the thread about whether or not the 17 was in reference to the conspiracy theory, to Alabama’s 17th national championship or the fact they won it playing in the 2017 season. The New York Times notes that when Alabama visited President Barack Obama in 2016, they presented him with a jersey numbered “15.” 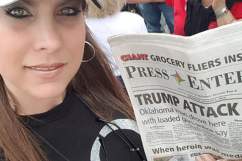 Loading more stories
wpDiscuz
0
0
Would love your thoughts, please comment.x
()
x
| Reply
QAnon's followers have a particular affection for the number 17. The believe that every time Donald Trump references it, he's really referencing them.