YouTube/The Common Sense Conservative Tusitala 'Tiny' Toese is a leader of the Patriot Prayer party, set to take part in a rally on August 4.

Tusitala ‘Tiny’ Toese is a leader in the Patriot Prayer party and often considered to be the “right-hand man” for founder Joey Gibson.

Toese has made several speeches at Patriot Prayer rallies, and often posts his own videos to Facebook, as does Gibson. He claims he joined the Patriot Prayer movement after seeing the actions of anti-fascist protestors during the 2016 election, and claims that the more he learned about Trump, the more he realized how much good he was doing.

The Patriot Prayer march on August 4 was billed as “Tiny’s last march before he leaves to go back to his island” of American Samoa, though he has not confirmed that he is actually moving. Portland Police are also preparing for the rally to get potentially violent, according to The Washington Post.

Here’s what you have to know.

1. Toese Became a Trump Supporter Because of the Way Antifa Protestors Acted at a Trump Rally

In a speech at a rally, Toese explained that he began a Trump supporter after going to a Trump rally and seeing allegedly violent antifa protestors. “Even when I was standing in that park with a Make America Great Again hat, I still had doubts about Trump and his supporters,” Toese said. “And if antifa was to get there…if they weren’t violent, if they were just standing there…I would’ve been part of them. But when they started coming in anc beating up people, I was like, ‘Hell no.'”

Toese continued, “Ignorant people don’t want to know that, because it’s a fact and you can’t argue a fact. And that’s why I’m standing where I’m standing now, and I’m proud to say I’m a true American patriot.”

2. In a Speech in Boston, He Called AntiFa Protestors “Anti-First Amendment, Anti-F*cking American”

3. Toese Was Charged With Assault of the Fourth Degree, Allegedly for an Incident Where He Punched Another Man

On July 1, Toese was arrested at a rally and charged with assault in the fourth degree. The arrest was allegedly connected to an incident earlier in June that occurred when a man claimed he was punched by Toese.

The man said that he was at a shopping area in Portland when several men in a car (including Toese) were driving in a truck and yelling at strangers. “They were yelling: ‘Support Trump, build the wall,’” he said. He added that he responded with profanity, and then they got out of the car.

“They were calling me a faggot and slinging epithets at me,” he said. “Tiny walked over calmly and … punched me in the face. I’m like, half his size. I was not a threat to them. I’m 34 years old, not 17. This is not a thing that happens to me day-to-day.”

4. His Facebook Profile Sites a Career of ‘Self-Employed Antifa Removal’

Toese’s Facebook profile reveals his “job” to be antifa removal. Patriot Prayer and Anti-fascist protestors have often been pitted against one another in recent years, coming into occasionally violent clashes, with violence coming from both sides.

For the August 4 rally, four antifa groups (Eugene Antifa, Rose City Antifa, RASH NW, and Pacific Northwest Anti-Fascist Workers Collective) have reportedly banded together for the confrontation. The group has made a statement leading up to the event:

“We make no apologies for the use of force in keeping our communities safe from the scourge of right-wing violence. Make no mistake, these people are coming here with the intent to harm and threaten people. We must be that front line. We may not be muscle bound gym rats, we certainly aren’t the sort of sadistic bullies we are facing, but never the less we have to go out there and be the ones willing to physically protect people already under attack in our communities.”

5. In a Facebook Video Leading Up to the August 4 Rally, Toese Described His Fellow ‘Patriots’ As ‘One Big Happy Family’

In a Facebook video leading up to the August 4 rally, Toese published a Facebook live video in which he showed some of the people who were coming to support Patriot Prayer and march with them at the rally. In the video, many of the fellow “patriots” are seen holding up white power gestures to the camera.

A white power symbol is traditionally believed to be an upside-down  “OK” sign with three fingers spread to mimic the shape of the letter ‘W.’ However, Toese, Gibson, and the rest of the Patriot Player party have maintained that their group has no racist intentions, and Toese himself does not make the gesture in the video. 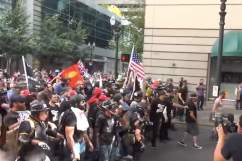 Read More
5 Fast Facts
Tusitala 'Tiny' Toese is a leader for the Patriot Party, a conservative movement holding a rally on August 4 in Portland that many have feared will become violent.