Bridget McCain and her siblings have been mourning the loss of their dad, John McCain, at various memorial services, many of which have been televised. Because McCain’s kids live relatively private lives (save for Meghan McCain, who is a co-host on The View), there has been a great deal of curiosity about them and the lives they live.

During this week’s memorial services, photographers captured some emotional moments between Bridget McCain and her siblings. In the photo below, Bridget can be seen with her head down as she is escorted back to her seat by her older brother, Jack. Bridget had just done a reading at the North Phoenix Baptist Church in Phoenix, Arizona.

GettyBridget McCain and her brother, Jack.

In the next photo, Bridget can be seen consoling her older sister, Meghan. The photo was taken at the Vietnam Veterans Memorial in Washington, D.C. The girls had just watched their mom place a wreath at the memorial in honor of their late father.

Bridget and Meghan were holding one another in a side-embrace. Both women stood solemnly, as Meghan was seen wiping tears from her face.

Bridget McCain is the youngest child of John and Cindy McCain. She was adopted by the couple in 1991, after Cindy traveled to Bangladesh and visited an orphanage during her trip.

Bridget received national attention in 2008, when Senator McCain was on the campaign trail. At the time, her dad shared her adoption story, and Bridget became more well-known. After the election was over, the McCain family returned to their quiet lives.

Following McCain’s passing, his kids have all been front and center once more.

“Last summer, Senator John McCain shared with Americans the news our family already knew: he had been diagnosed with an aggressive glioblastoma, and the prognosis was serious. In the year since, John has surpassed expectations for his survival. But the progress of disease and the inexorable advance of age render their verdict. With his usual strength of will, he has now chosen to discontinue medical treatment. Our family is immensely grateful for the support and kindness of all his caregivers over the last year, and for the continuing outpouring of concern and affection from John’s many friends and associates, and the many thousands of people who are keeping him in their prayers. God bless and thank you all,” read a statement from the McCain family. 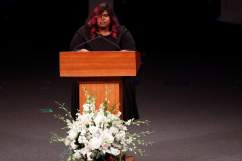 Bridget McCain Was Adopted From Bangladesh