Senator Cory Booker of New Jersey released a committee confidential document during the confirmation hearing of Supreme Court nominee Brett Kavanaugh. The act was against Senate rules and threatened to put Booker at risk of being ousted from his office.

The Emails Senator Booker Released Focused on the Issue of Racial Profiling, and Had Already Been Leaked to the Media

The 2002 email in which Kavanaugh discusses racial profiling that Sen. Booker was referring to: pic.twitter.com/1TnmKGRMng

Before going further, it’s worth explaining that the document in question was already in the public sphere. It was among the documents leaked to the New York Times. Reuters reporter Lawrence Hurley shared an image of the email on twitter, which had to do with racial profiling.

The email was sent by Kavanaugh to attorney Helgard C. Walker on January 17, 2002. It reads: “The people who favor some use of race/natl origin obviously do not need to grapple with the “interim” question. But the people (such as you and I) who generally favor effective security measures that are race-neutral in fact DO need to grapple– and grapple now– with the interim question of what to do before a truly effective and comprehensive race-neutral system is developed and implemented.”

Senator Booker went through with his threat and released 12 pages of emails. Shortly after doing so, Judiciary Chairman Chuck Grassley cleared a stack of emails for public releases, removing the “committee confidential” distinction. That stack included those that had just been released by Senator Booker.

These are the 4 documents marked committee confidential that I brought up in my questioning of Supreme Court nominee Brett Kavanaugh last night –> https://t.co/2RZkY2FS9a 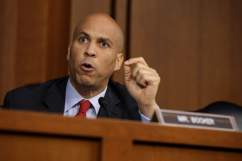 Here’s How Cory Booker Could Be Expelled From the Senate

Senator @JohnCornyn: "Running for president is no excuse for violating the rules of the Senate…" pic.twitter.com/A2pB19ENPP

C-SPAN shared a video of Senator Booker explaining his reasoning for wanting to release the email. Booker explained, “For a person, the highest office in the land, for a lifetime appointment. We’re rushing through this before me and my colleagues can even read and digest the information.”

Judiciary committee chairman, Senator Chuck Grassley, interrupted Booker during this tangent. “Can I ask you how long you’re going to say the same thing three or four times?”

Sen. Cory Booker at Kavanaugh hearing says he is releasing email "about racial profiling" to "expose" that documents "being withheld from the public have nothing to do with national security."

"I understand that the penalty comes with potential ousting from the Senate." pic.twitter.com/dIL8TsNsEP

Republican Senator John Cornyn of Texas spoke up after Booker mentioned his name. He said, “Running for president is no excuse for violating the rules of the Senate, or of confidentiality of the documents that we are privy to. This is no different from the senator deciding to release classified information that is deemed classified by the executive branch because you happen to disagree with the classification decision.

That is irresponsible and outrageous. And I hope the senator will reconsider his decision because no senator deserves to sit on this committee or serve in the Senate if, in my view, if they decide to be law unto themselves and willingly flout the rules of the Senate and the determination of confidentiality in classification. That is irresponsible and conduct unbecoming a Senator.”

Senator Booker also stated that he was willing to risk being expelled from the senate. “This is about the closest I’ll ever come in my life to an ‘I am Spartacus’ moment.”

Sen. Cornyn: "I would correct the senator's statement, 'There is no rule.' There is clearly a rule that applies."

Sen. Booker: "Then apply the rule and bring the charges." https://t.co/JUkIdZ4RJ2 pic.twitter.com/yNOK7sRxWm

The email in question was first discussed Wednesday night during Booker’s questioning of Kavanaugh. He was asking the judge about his opinions on racial inequality and Senator Booker referred to emails sent during Kavanaugh’s time working as a lawyer for President George W. Bush.

Senator Booker’s threat triggered support from fellow Democrats Richard Blumenthal (D-CT) and Richard Durbin (D-IL). Senate Democrats have repeatedly stated that the confirmation hearing should have been postponed, and pushed for records related to Brett Kavanaugh’s time in the White House be released.

.. of the committees, subcommittees and offices of the Senate shall be liable, if a Senator, to suffer expulsion from the body; and if an officer or employee, to dismissal from the service of the Senate, and to punishment for contempt."https://t.co/N3ZsK1IZHB

As all of this was going on, White House Deputy Press Secretary Raj Shah shared on Twitter the rules concerning the expulsion of a sitting Senator. He posted a link to a document of Senate rules. Shah quoted in his tweets: “Senate Rule 29-5: ‘Any Senator, officer or employee of the Senate who shall disclose the secret or confidential business or proceedings of the Senate, including the business and proceedings…. .. of the committees, subcommittees and offices of the Senate shall be liable, if a Senator, to suffer expulsion from the body; and if an officer or employee, to dismissal from the service of the Senate, and to punishment for contempt.'”