National Weather Service Though Hurricane Florence was downgraded to a category 2 hurricane, it's still caused storm surges up to 10 feet in some areas, with the worst of the flooding still expected to come.

Though Hurricane Florence has been downgraded to a category 2 storm over the last 24 hours, it’s still predicted to cause significant damage, particularly in relation to flooding along the coast and further inland.

For now, the city of Charleston doesn’t appear to sit in the direct path of Florence, and is currently predicted to receive less than 10 inches of rain.

Charleston Is Currently Predicted to Get Approximately Six Inches of Rainfall, as of Thursday Morning 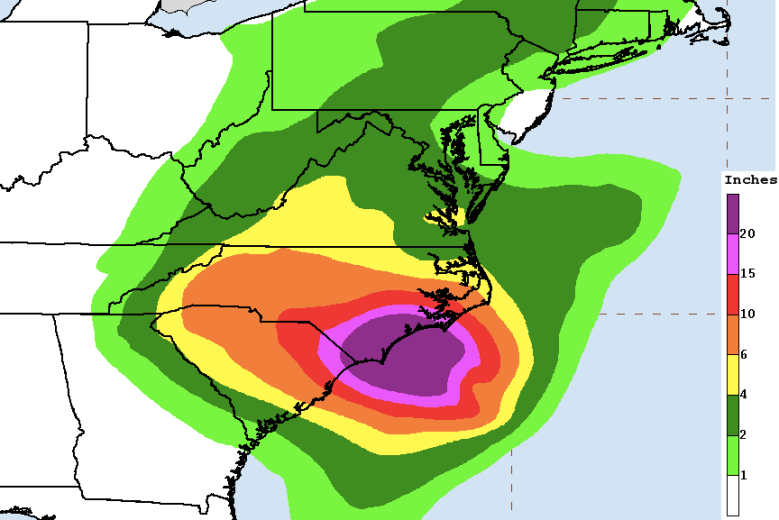 According to the National Weather Service, Charleston is likely to get anywhere between four and 10 inches of rainfall from Hurricane Florence, as long as the hurricane sticks to its path.

However, Charleston residents should prepare for flooding as the result of storm surges and rainfall from areas along the coastline farther north.

Accuweather reports that residents of the Carolina coastline will likely be “bombarded” with rain and heavy wind from Thursday to Saturday. Though NWS estimates upwards of 20 inches of rainfall along the coastline, Accuweather is estimating closer to 40 inches, which could lead to catastrophic levels of flooding from the coastline inland.

NWS confirms that Charleston is currently at a “slight” risk of extreme flooding, for now.

Charleston Should Expect Storm Surges of up to Six Feet

NWSCharleston is currently under a storm surge warning, per the NWS.

Though the North Carolina coastline has the highest risks of storm surges, Charleston residents can still expect anywhere from two to six feet of storm surges during Hurricane Florence, per the NWS.

Weather.com says of the expected storm surges: “A destructive storm surge will accompany the eye coming ashore sometime from Thursday night into Friday or Saturday, and coastal flooding may persist through multiple high tide cycles into this weekend east of the center of Florence. Large, battering waves will ride atop this surge. All evacuation orders from local officials should be followed because of this dangerous threat. Significant beach erosion is also likely on the southeastern U.S. coast. Elevated water levels may persist for some time after landfall in areas where onshore winds persist.”

The Weather Channel estimates that storm surges of nine feet could cause floods that are so high they might cover the entire first floor of buildings.

READ NEXT: How Bad Will the Flooding Be in Wilmington, NC?

Read More
Hurricane Florence
Charleston, NC isn't likely to get a lot of rainfall from Hurricane Florence, but there's still a chance of flooding as the result of storm surges and runoff from rain in northern areas.