Getty John McCain and Jon Kyl pictured together in 2012.

Arizona Governor Doug Ducey has selected former senator Jon Kyl to replace John McCain in the U.S. Senate. Kyl, 76, told Ducey he will serve at least until the end of 2018, the Arizona Republic reports.

Arizona law requires a vacant U.S. Senate seat to be filled until the next general election. If Kyl leaves the seat before 2020, Ducey would be required to appoint another person. The winner of a special election held in 2020 will then serve out the remainder of McCain’s term, which expires in 2022.

Ducey said in a statement, “There is no one in Arizona more prepared to represent our state in the U.S. Senate than Jon Kyl. He understands how the Senate functions and will make an immediate and positive impact benefiting all Arizonans. I am deeply grateful to Senator Kyl for agreeing to succeed his friend and college of so many years. Every single day that Jon Kyl represents Arizona in the United States Senate is a day when our state is being well-served.”

“Jon Kyl is a dear friend of mine and John’s. It’s a great tribute to John that he is prepared to go back into public service to help the state of Arizona,” John McCain’s wife, Cindy McCain, tweeted Tuesday.

Arizona Senator Jeff Flake, who is retiring after he completes his term at the end of this year, tweeted, “What an excellent choice! There is no one more qualified and Arizona is well served. Kudos to Senator Kyl for his willingness to serve once again.”

In 2014 McCain told the Arizona Republic, “He is respected by one and all, Republican and Democrat. I wish I were as good a public servant as Jon Kyl. I think he’s a wonderful man. Kon Kyl will go down in history, frankly, as a greater senator than anything I hope to achieve.”

Kyl spoke about McCain at a memorial service in Arizona after McCain’s death. You can watch his speech below:

“John McCain believed in America. He believed in its people, its values and its institutions,” Kyl said at the memorial service last week. “You see he came to this realization during his time as a POW in Vietnam. ‘I fell in love with my country,’ he said, ‘when I was a prisoner in someone else’s. As a result, he dedicated his life to serving his country. When he saw challenges to its institutions or values, he fought to protect them. Thus his efforts to rein in excess campaign expenditures and congressional earmarks, which he viewed as corrupting our values and institutions.”

Kyl added, “Some have disagreed with some of Senator McCain’s votes on policy positions. But that should not diminish our gratitude for his service. And let’s return to where I began, John’s love for America and for Arizona. He represented our values all over the world as Senator from Arizona and America is stronger for his fierce defense of our values. We can be proud he was our senator. I consider it a great privilege to have served with John and I will miss him as a friend and as a great force for America in the world.”

Kyl, a Nebraska native who grew up in Iowa as the son of a congressman, attended the University of Arizona, graduating in 1964. He also attended law school there. Kyl was elected to the U.S. House of Representatives in 1986 and served in the House until 1995, when he won his Senate seat. Kyl did not seek re-election in 2012 and left the Senate as the second-highest ranking Republican in the body. He has been working as a lobbyist at Covington & Burling since leaving public office and will be cutting ties immediately with his clients, according to the New York Times.

According to the firm’s website, Kyl, “advises companies on domestic and international policies that influence U.S. and multi-national businesses and assists corporate clients on tax, health care, defense, national security and intellectual property matters among others.”

Kyl is married to Caryll Collins Kyl and has a son and a daughter. He also has four grandchildren. 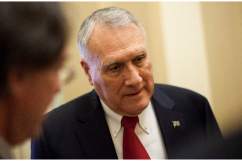 What Jon Kyl Has Said on Donald Trump, Impeachment

Loading more stories
wpDiscuz
0
0
Would love your thoughts, please comment.x
()
x
| Reply
Jon Kyl has been picked by Arizona Governor Doug Ducey to replace the late John McCain in the U.S. Senate. Kyl served as a Senator from 1995 to 2013.