Getty Les Moonves, in 2017, the Chairman of the Board, President, and Chief Executive Officer of CBS Corporation,. is stepping down

On the heels of a new damning report of a pattern of sexual harassment and sexual assaults, CBS chief Les Moonves is out at CBS, according to CNN Money.

Effective Sunday, hours after The New Yorker story by Ronan Farrow came out, out too was Moonves after almost a quarter century at the broadcast giant. The CBS board had been working on a deal, but by evening, Moonves was no longer running the show. And of the package he would walk away with, reported as being up to $100 million in a severance package, that’s on hold pending a CBS investigation.

CNN Money reported that “two law firms retained by the CBS board are still investigating” and his severance “will depend upon the results of the independent investigation and subsequent board evaluation.” It was also reported CBS it and Moonves and CBS would “donate $20 million, deducted from any of his severance, ‘to one or more organizations that support the #MeToo movement and equality for women in the workplace.'”

Moonves gave the The New Yorker a statement strongly denying any wrongdoing and his wife Julie Chen has been defending her husband. This tweet came on the heels of journalist Ronan Farrow’s July report where the first of many womne would come forward to speak about their experiences with Moonves; sexual harassment and/or sexual assaults and then retibution.

In the newest report from Farrow, where six women go on the record to describe what most state’s laws define as “Oral Copulation by Force or Fear; when a victim is forced to perform oral sex on a perpetrator, receive oral sex from a perpetrator, or both,” Moonves says the assaults never happened.

“The appalling accusations in this article are untrue. What is true is that I had consensual relations with three of the women some 25 years ago before I came to CBS. And I have never used my position to hinder the advancement or careers of women. In my 40 years of work, I have never before heard of such disturbing accusations. I can only surmise they are surfacing now for the first time, decades later, as part of a concerted effort by others to destroy my name, my reputation, and my career. Anyone who knows me knows that the person described in this article is not me.” 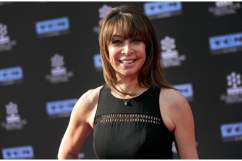 The news of Moonves stepping down comes as it’s been reported he’s likely to land an around $100 million parting gift.

As an employee of CBS, I would just like to say that Les Moonves should be fired without getting a fucking dollar. The actions described in this article are those of sexual assault and shame on anyone else in the corporation who knew about his crimes. https://t.co/1ItYyeLGmH

CNN reported Sunday afternoon, shortly after Farrow’s follow-up to his bombshell story that Moonves had sexually assaulted a number of women including actor Illeana Douglas who came forward and spoke in great and graphic detail about his alleged assault and retribution that followed her rebuke of sexual harassment and assault, that he Moonves was out.

This is an infuriating must-read. The allegations against Les Moonves are horrifying–if true, he belonged in jail, not board rooms–and it's also horrifying that he may leave CBS with a payout of $100 million. That money should go to organizations that fight sexual assault. https://t.co/viaIL3Ah7q

CNN just reported that Moonves “will step down soon as part of a wide-ranging corporate settlement of a separate fight for control of CBS. The CBS board of directors is likely to announce the deal by Monday morning, according to two executives with direct knowledge of the matter. Lawyers were said to be putting the finishing touches on the settlement on Sunday.”

Farrow’s report says “Moonves forced (a number of women) to perform oral sex on him, that he exposed himself to them without their consent, and that he used physical violence and intimidation against them. A number of the women also said that Moonves retaliated after they rebuffed him, damaging their careers.”

One of the women is Phyllis Golden-Gottlieb, now 82, then in her early 50s. A striking woman, she does not look her age. She claims that Moonves forced her to perform oral sex and greeted her in his office during a meeting without pants and with an erection.

Some of the board was made aware of a police investigation into an allegation of forced oral sex and assault and battery in late January. That allegation was made by Phyllis Golden-Gottlieb, who was outraged the board didn’t do more. pic.twitter.com/tSmtbBLOok

She claims the incidents took place in the 1980s when she was a highly placed entertainment industry executive but still, she has written, subservient to the men in positions of power. She wrote years after, when she decided to leave Hollywood for the rough and tumble classrooms of LA, “As an executive in the entertainment industry in the days when women were few and not particularly endeared by the powerful, I learned to be strong and tough.”

“The president of a studio I worked for picked me up and threw me against the wall for failing to include a favorite of his on a memo — and I didn’t cry. A network department head threatened to throw me out the window for making a decision when he was out of town — and I didn’t cry. Another studio head joined me at a meeting to share good news — without his pants — and I didn’t cry.”

A number of other women came forward and went on the record with Farrow to accuse Moonves some say in large part for a statement he made following the first Farrow report that famed actor Illeana Douglas spoke about being raped by Moonves. Moonves described his actions as “advances” made many years ago.