Roma Downey is an actress and author originally from Northern Ireland. She has been married to producer Mark Burnett since 2007. She claimed on social media to have been injured during an altercation between her husband and actor Tom Arnold at a party in Los Angeles on September 16, 2018.

1. Downey Shared a Photo on Twitter of her Bruised Hand, and Claimed the Injury Resulted From an ‘Ambush’ by Tom Arnold

Bullshit. You lie your crazy husband attacked me you psycho. I’m filing police report & suing you for defamation. https://t.co/9yXAEXM6na

On September 16, 2018, Burnett and actor Tom Arnold got into a physical altercation at a party in Los Angeles. Downey claimed that she was injured during the fight. She posted the photo above of her bruised hand. She wrote, “Got this bruise tonight when Tom Arnold tried to ambush my husband Mark and me at a charity event. Is your TV show worth it Tom? Please stop.”

Arnold shot back at her, claiming that the image was an old picture. He has accused Burnett of assault and was pressing charges. On Twitter, he also threatened to sue Downey for defamation.

The TV show Downey was referring to in her tweet was Arnold’s Viceland series called The Hunt for the Trump Tapes. The documentary-style show follows Arnold’s mission to find outtakes and unaired footage from the Apprentice, of which Burnett was an executive producer. There have been allegations that Donald Trump was recorded using the n-word and other racist language while filming the reality show.

.@MarkBurnettTV called to say that there are NO TAPES of the Apprentice where I used such a terrible and disgusting word as attributed by Wacky and Deranged Omarosa. I don’t have that word in my vocabulary, and never have. She made it up. Look at her MANY recent quotes saying….

Burnett pointed out in a 2016 that he and MGM Studios do not have the legal right to make unseen footage available to the public. President Trump also tweeted in August of 2018 that Burnett had allegedly told him that no such tapes existed. Burnett has not publicly commented either way. 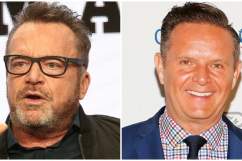 2. Arnold Accused Downey of Knocking Away a Witness’s Phone During the Altercation

Roma knocked Bryan Fogel’s phone out of his hand after Mark Burnett chocked me. Bryan came with me. He won the Oscar this year for his amazing documentary Icarus. He has tape. https://t.co/nPJyDAarsE

Tom Arnold accused Mark Burnett of choking him, and has pressed charges. TMZ spoke with Arnold as he was leaving the Los Angeles Police Department. He told the website that he believed Burnett had been trying to kill him, and that he needed medical attention after the incident.

Arnold’s attorney, Marty Singer, laid the blame on Mark Burnett in an interview with the Hollywood Reporter. He claimed that the confrontation was an “unprovoked attack” by Burnett and that there was at least one witness who could support Arnold’s side of the story.

Downey presented a different viewpoint on Twitter. She accused Arnold of “ambushing” her and Burnett. An alleged witness backed up that story to TMZ. That source claimed that Arnold pushed Burnett first, and broke the crucifix around Burnett’s neck. Other actors, including Patton Oswalt and Billy Eichner, shared on Twitter that they spoke with Arnold after the confrontation, but did not know who had started it.

Director Bryan Fogel was also reportedly standing nearby when this went down. Arnold claimed on social media that Fogel had video of the confrontation. He claimed that “Roma knocked Bryan Fogel’s phone out of his hand after Mark Burnett chocked me. Bryan came with me. He won the Oscar this year for his amazing documentary Icarus. He has tape.”

3. Donald Trump Appears to Have a Complicated Relationship with Mark Burnett and Roma Downey

Sitting in West LAPD filing charges against your best bud Apprentice Outtakes Mark Burnett who lost his mind, attacted & chocked me last nite at Katzenberg’s Night Before The Emmy’s Party. Last fight I got into there was with Harvey Weinstein. Mark Burnett is scared:) #TrumpTapes

As the top producer of the Apprentice, Mark Burnett worked closely with Donald Trump for several years. despite that, Burnett and Roma Downey appear to have a relationship with President Trump that has fluctuated over the years, despite Tom Arnold’s accusations that they are “best buds.”

@realDonaldTrump @MarkBurnettTV @SonofGodMovie thanks Donald , love to you and Melania we appreciate your support on our movie #sonofgod

Roma Downey and Donald Trump appeared to have been on friendly terms in 2014. He plugged her movie in a tweet from February of that year, describing Downey as “incredible” and the movie as “fabulous.” Downey responded by writing, “thanks Donald, love to you and Melania we appreciate your support on our movie #sonofgod.”

Fast forward to 2016, and the relationship appeared to have soured. In a statement prior to the 2016 election, Burnett declared that he did not support Donald Trump’s candidacy. He stated, “My wife and I reject the hatred, division and misogyny that has been a very unfortunate part of his campaign.” Burnett is also reportedly a Democrat.

This statement was made after the release of the infamous Access Hollywood tape. Burnett faced calls to release behind-the-scenes footage from the “Apprentice,” but he refused to do so. He also reiterated that he did not have the legal right to release unaired footage, per a clause in Donald Trump’s contract.

President Trump currently follows 47 people on Twitter. That list includes Mark Burnett and Roma Downey. But he has apparently unfollowed Downey at least twice over the years.

The Belfast Telegraph reported in December of 2016 that Trump unfollowed, followed, and then unfollowed Downey again within the span of just a few weeks.

It’s unclear exactly when the president decided to add Downey back to his short list on Twitter. But all apparently has been forgiven, because he promoted Downey’s book in March of 2018. “Great couple, great book!”

The book, Box of Butterflies, is a collection of poems, verses from Scripture and personal stories from Downey’s life. On the official website, the butterfly theme is said to “remind us that the wonder of God’s love and kindness is sometimes reflected in the gentle whispers of his creation and that we all have the power to transform from simple caterpillars into exquisite butterflies.”

5. Roma Downey Is Best Known in the United States for Her Role as Monica in ‘Touched by an Angel’

Roma Downey is originally from Northern Ireland and began her acting career there. She gained more notoriety after relocating to the United States. She played Jacqueline Kennedy in a television miniseries and had a few roles on Broadway. But her most well-known role to date was the character Monica from Touched by an Angel. The series ran on CBS from 1994 until 2003.

In 2011, she and husband Mark Burnett teamed up to produce The Bible for the History channel. Downey also starred in the series as the Virgin Mary. An estimated 100 million viewers tuned in to the show when it debuted in March of 2013.

READ NEXT: Florida Teen Dies After Collapsing During a Basketball Game