A rat pulled a fire alarm in D.C., causing the evacuation of an entire condo building.https://t.co/np5ko0flFN pic.twitter.com/e2qLFZWfxL

It’s not something you see on a regular basis: a rat with jumping skills lunging at something high above its head. But that’s exactly what happened in this video obtained by NBC Washington.

A rat crawled up a handrail, then hurled itself several inches into the air toward the fire alarm. The rodent succeeded in pulling the alarm, forcing the evacuation of the entire building. Residents were surprised to learn there was no fire.

This happened at a condominium building in Washington, D.C. during the summer of 2017. But the surveillance video was recently obtained and shared by NBC Washington and has quickly gone viral. The video has been viewed more than 17,000 times on the TV station’s Facebook page and garnered more than 11,000 likes on Twitter. 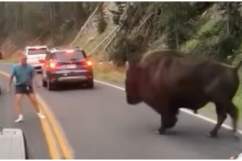 This is the latest little rascal to take social media by storm.

In 2015, “pizza rat” surprised and entertained youtube viewers. That rat was seen dragging a slice of pizza down a flight of stairs in New York City, toward the subway trains. The slice was bigger than the rat, but he seemed determined to carry off his prize. Something must have scared the rat because he scampered away, before hiding in the corner of the stairs and staring at the pizza. The video has more than 10 million views.

The Late Show with Stephen Colbert had fun with the video. The late night host joked that while tourists may have been shocked to see a rat dragging a slice of pizza, it was a typical day for New Yorkers. “For those of us who live in New York, it’s really not that big of a deal. Here, if a rat doesn’t bring your slice in 30 minutes or less, it’s free!”

READ NEXT: Amber Alert Issued for Children of Murder Suspect