Broward County Sheriff Anthony Borges in the hospital with the sheriff.

Anthony Borges was hailed as a hero by the Broward County Sheriff and others for saving many classmates’ lives during the Florida school shooting. He acted as a human shield and was shot, but he lived.

The mass shooting – which was the third deadliest school shooting in U.S. history – took the lives of 17 staff members and students. Nikolas Cruz, an expelled former student, is accused of committing the crimes after authorities say he strolled into the school, pulled a fire alarm, and started shooting.

However, it might have been even worse were it not for Borges, a teenager who is credited with saving the lives of others. Borges is featured on the October 2018 cover of a New York Magazine in a dramatic photo that shows his scars. It reads, “New cover: Parkland survivor Anthony Borges, photographed by Michael Avedon. 72 years of school shootings. By those who survived them.” You can read the article here.

72 years of school shootings. By those who survived them. https://t.co/A3RdXA2SMA pic.twitter.com/QAU41uoo3i

Borges in the hospital.

Many more lives might have been lost in the tragedy were it not for the quick-thinking of Anthony Borges. His family says he saved the lives of about 20 people.

Borges was only 15-years-old. “None of us knew what to do. So, he took the initiative to just save his other classmates,” Carlos Rodriguez, another student, told Good Morning America.

“Anthony was the last of 20 students who fled into a room and was trying to lock the door when he was shot…He held his ground in the doorway, putting his body between the bullets and his classmates, who all survived uninjured,” ABC News reported.

According to NBC News, Borges “was shot five times while locking the door to a classroom during the school shooting.”

In an intent to sue letter, Borges’ attorney wrote that “The failure of Broward County Public Schools, and of the principal and school resource officer to adequately protect students, and in particular our client, from life-threatening harm were unreasonable, callous and negligent. Such action or inaction led to the personal injuries sustained by my client.” He noted that Borges still can’t walk and remains in the hospital.

2. Borges Is a Soccer Player at the School & Used His Body as a ‘Human Shield’

The photo on the GoFundMe page for Anthony Borges and his family.

Borges is a soccer player at the school, according to USA Today.

ABC News is reporting that Borges used his body as a “human shield” to protect his classmates. He “placed his body between alleged mass killer Nikolas Cruz and fellow students,” the network reported. One of those classmates, Rodriguez, “said he survived because of Anthony’s heroism,” according to ABC.

According to Univision, Borges is Venezuelan in heritage.

3. The Sheriff Visited Borges in the Hospital

The Broward County Sheriff, Scott Israel, visited Borges in the hospital. The sheriff’s department later tweeted out a picture of the young man, writing, “The Sheriff was honored to visit Anthony Borges,15, in the hospital. Anthony was shot five times. Fortunately, he is recovering, but has a long road ahead with more surgeries needed. Please join us in praying for the swift recovery of Anthony and all others from #StonemanDouglas.”

The boy’s father, Royer Borges, told ABC News his son was his hero and is now in stable condition. “I only ask that people pray for him,” he said.

Many people have contributed to a GoFundMe page to help Anthony Borges and his family as news of his heroism has spread. The GoFundMe page describes the nature of the young man’s serious injuries. It’s raised almost $900,000 for the young hero.

“Anthony is a victim of the shooting at Marjory Stoneman Douglas High School,” it reads. “During this unspeakable tragedy, Anthony was able to save about 20 other students as he attempted to close and lock the door to a classroom. He was shot multiple times (both legs were shot, left upper thigh bone shattered and one bullet went through his back). He has a long road of recovery ahead of him but he is alive and stable.”

The page continues: “Our thoughts and prayers are with Anthony and his family. Any help is very much appreciated.”

5. People Are Praising Borges’ Heroism & There Were Also Other Heroes That Day

On the GoFundMe page, people are praising the heroism of the young man. “You show us true courage. Godspeed for a full recovery,” wrote one man. A woman wrote, “Bless you, for being so brave and protecting your classmates.”

“How terrible that you had to endure this tragedy. How wonderful that you were so brave and helped save the lives of so many. Thank you for your kindness and your bravery,” wrote one woman on the GoFundMe page.

Borges was one of multiple heroes that day. Another hero, student Peter Wang, is pictured above. Tragically, some of them – such as staff members who intervened and Wang – lost their lives. However, the actions of those people and of Borges showcase the best of human nature, people said.

Peter Wang was a freshman at Marjory Stoneman Douglas High School who was a member of the school’s Junior Reserve Officer Training Corps (JROTC) program. An online petition says that Wang “was last seen, in uniform, holding doors open and thus allowing other students, teachers, and staff to flee to safety.” 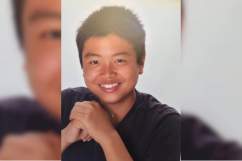