Earlier this year, Anderson Cooper ended his relationship with his longtime partner, Benjamin Maisani. He is now thought to be dating Texas-based doctor, Victor Lopez.

Although their relationship hasn’t been confirmed, the two men have been seen together on several occasions over the past several months.

Lopez was born on February 16, 1985. He grew up in Texas, where he still lives today. He currently works as a radiologist at Parkland Memorial Hospital in Dallas.

1. He Is a Radiologist in Dallas, Texas

Lopez is a board-certified radiologist.

“A radiologist is a physician who is also an imaging expert with specialized training in obtaining and interpreting medical images obtained by using x-rays (radiographs, CT, fluoroscopy) or radioactive substances (nuclear medicine) or by other means such as sound waves (ultrasound) or the body’s natural magnetism (MRI),” according to Radiology Info for Patients.

Lopez has worked as a radiologist for the past eight years and is currently affiliated with Parkland Memorial Hospital in Dallas, Texas, according to WebMD.

“Dr. Victor O. Lopez affiliates with Methodist Dallas Medical Center, and cooperates with other doctors and specialists in many medical groups including The University Of Texas Southwestern Medical Center At Dallas, Methodist-cdi,” reads his bio on the Health Care for People website.

2. He Graduated from the University of Texas Health Science Center at San Antonio in 2010

Lopez obtained his degree from the University of Texas Health Science Center at San Antonio back in 2010. According to his bio on the Radiology Associates of North Texas website, Lopez graduated with honors.

From 2011 through 2015, he completed his residency at the University of Texas Southwestern Medical Center in Dallas, working in diagnostic radiology. The following year, he did a fellowship in neuroradiology at the same location.

3. He & Cooper Are Sort-of Instagram Official, But Haven’t Confirmed Their Suspected Relationship

Cooper is notoriously private when it comes to his personal life. In fact, he rarely talked about his relationship with Maisani and didn’t even confirm they were an item until sometime in 2015. According to Bravo, it’s entirely possible that Cooper and Lopez are “just friends.”

Lopez has shared pictures of himself with Cooper on Instagram. Although he never confirmed that the two were in a romantic relationship, he has shared a couple of memories that he’s made with Cooper, like the one in the photo above. According to the Daily Mail, that photo was taken when Cooper was in Dallas to celebrate Lopez’s birthday.

Although it is unclear when the two men met, they have been spotted together on a few occasions over the past four months. According to the Daily Mail, Cooper was seen in Dallas before Christmas, “staying at a luxury hotel” in the area. After the holidays and his annual New Year’s Eve hosting gig, he flew back to Texas, according to the outlet.

On January 15, Cooper and Lopez were seen together in New Orleans. Two weeks later, Cooper was back in Dallas and was spotted grabbing a bite with his rumored new beau. In February, the two took were spotted together in Boston.

Since that time, however, there hasn’t been any additional chatter about Cooper’s supposed relationship with Lopez. There also haven’t been any more photos of the two of them together.

4. His Instagram Was Made Private Shortly After Relationship Rumors Started to Swirl

Lopez had been fairly active on social media and even shared a couple of photos of himself with Cooper before making his account private. Now, however, it appears as though Lopez has completely deleted his Instagram account.

Lopez does have a Facebook account, on which he shares a select few photos and updates with the public but, for the most part, the page is private.

5. Cooper Was Still Living With Maisani in New York After Their Split

He is the art expert…. I'm the complainer who wants to take naps.

Earlier in March, Cooper announced that he and Maisani had decided to part ways. Cooper released a statement about the split, saying that the two men ended their nine-year relationship “some time ago.”

“Benjamin and I separated as boyfriends some time ago. We are still family to each other, and love each other very much. We remain the best of friends, and will continue to share much of our lives together,” the statement read.

Despite their split, Cooper and Maisani decided to continue living together. The two shared a home in the Greenwich Village. The former couple purchased the home in 2009 for approximately $4.3 million, according to The Daily Mail.

It is unknown if the two are still living together at this time or if they have gone their separate ways completely. 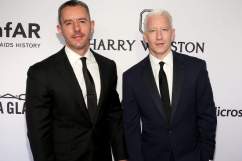 Loading more stories
wpDiscuz
0
0
Would love your thoughts, please comment.x
()
x
| Reply
Victor Lopez is the rumored boyfriend of Anderson Cooper. Lopez is a doctor who lives in Dallas, Texas. Here's what you need to know.