Instagram/Asheville Police David Steven Bell, a 51-year-old man from Black Mountain, North Carolina, is accused of assaulting an 11-year-old girl at the Asheville Mall in an incident caught on video.

A 51-year-old white man was arrested Saturday after punching an 11-year-old black girl in the face during an incident outside of a mall in Asheville, North Carolina, authorities say. David Steven Bell was caught on video striking the girl in the face with a punch, sending her to the ground at the Asheville Mall.

Bell has been released from custody. His attorney issued a statement Tuesday night saying that his client suffers from PTSD and felt threatened by “a large pack of youths,” the Asheville Citizen-Times reports. Bell’s attorney, Andy Banzhoff, said Bell was trying to help a woman who was being harassed by the group of girls.

“His actions were not motivated by any animus towards the persons in that group. Mr. Bell’s belief is that all persons are created equal and that we are all children of God,” Banzhoff said in the statement. The Asheville attorney told the newspaper Bell and his family are praying for healing for “those impacted by this unfortunate incident.”

Video of the incident was posted on Instagram and Facebook on Saturday and quickly went viral on Sunday. The girl who was the victim of the assault has not been identified and has not spoken out about what happened. The Asheville Mall said in a statement that the incident remains under investigation by police.

Here’s what you need to know about David Steven Bell:

1. David Steven Bell Is Seen in the Video Shoving the Girl Away From Him Before Punching Her in the Face, Knocking Her Out & Down to the Ground

David Steven Bell can be seen in the video, initially posted to Instagram by an unidentified person, in an argument with a group of young girls outside of the Asheville Mall. You can watch the video above. The incident occurred on Saturday, January 12. Bell is white and most of the girls in the video are black. It is not clear what occurred before the video started.

In the video, Bell can be heard yelling to the girls to “break it up.” As other girls yell at him, one can be heard asking, “who is he?” Bell walks menacingly at the girls and they appear to back off. One girl then pushes Bell in the back, barely shifting his balance.

As the girl walks toward Bell, he shoves her backward, sending her into a metal pole and nearly to the ground. The girl gets back up and Bell punches with a closed fist, knocking the girl out and down to the ground. The other girls then run away screaming as the video ends.

According to the Asheville-Citizen Times, the incident occurred about 7 p.m. at the Asheville Mall. Police spokeswoman Christina Hallingse told the newspaper that an off-duty officer who was already at the mall arrested Bell after the incident. The girl declined medical treatment and was not taken to the hospital, Hallingse told the Citizen-Times.

A woman who is seen in the video that Bell claims to have been helping is not his wife, as some have speculated. His attorney, Andy Banzhoff, told the Citizen-Times that his client had a previous brain injury and suffered from PTSD, but said it was too early to say whether that contributed to his actions.

“All I am doing at this stage is laying out the facts as we reasonably believe them to be,” he told the newspaper. He said arguments about the facts of the case would be settled in court. Banzhoff told the newspaper “(Bell) observed a large pack of youths harassing a woman.” The attorney did not say how the woman was being harassed. Police have not commented about Banzhoff’s claim.

Banzhoff said the girl who was punched shoved Bell in the back and then another “stepped towards” him “in an aggressive manner.” Bell then pushed her away and she lost her balance, falling backward.

“She then got to her feet and aggressively charged in the direction of Mr. Bell. As she entered Mr. Bell’s personal space, he struck her with his closed fist,” Banzhoff said. The attorney said his client flagged down the off-duty police officer himself. “His actions were in an effort to defend himself against the perceived threat from a large pack of youth who had trapped and surrounded him.”

2. He Is a Black Mountain, North Carolina, Resident Who Is Married With 2 Children

FacebookDavid Steven Bell and his wife.

David Steven Bell is a resident of Black Mountain, North Carolina, according to public records and his social media profiles. Bell is married and has two children, a 20-year-old son and a teen daughter.

On a now-deleted Twitter profile, Bell wrote, “Married with 2 wonderful kids and live in Western North Carolina..Paradise on earth that i get to share with my beautiful wife Ann.”

David Bell updated his Facebook cover page at 9 p.m. Saturday night, after his release from jail, to a photo of comedian and actor Zach Galifianakis from “The Hangover” with the words, “Have you ever noticed? In every group of friends..The shortest one is the craziest.”

3. David Bell Is a Piano Teacher & Deleted His Business Facebook Page After His Arrest

David Bell is a piano teacher in his hometown of Black Mountain, North Carolina, according to a website for those looking for an instructor. Bell offers lessons in intermediate piano, early childhood piano, beginning piano, popular piano, jazz piano and classical piano, according to the website.

After his arrest, Bell deleted a Facebook page for his piano teaching business. On the now-deleted page, Bell wrote, “I teach piano/keyboard to anyone aged 3-99. Located in Black Mountain North Carolina. I have over 40 years of playing…” 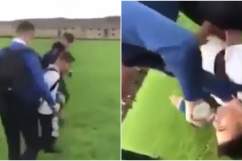 4. He Was Released From Custody early Sunday, but Could Face Up to 450 Days in Jail if Convicted of the 3 Misdemeanor Charges Filed Against Him

Bell was released from the Buncombe County jail just after 1 a.m. Sunday, records show. It is not clear how much bail he was required to post to secure his release.

The charges he faces are all misdemeanors. Bell was charged with assault on a female under the age of 12 and two counts of assault on a female. Both charges are class A1 misdemeanors, the most serious level for a misdemeanor charge in North Carolina. If convicted, he could face up to 150 days in jail per charge. But with no apparent previous criminal record, it is unlikely he would be sentenced to the maximum.

We are aware of the videos circulating on social media. The @AshevillePolice responded immediately and the situation was diffused. An arrest has been made. Please contact the Asheville Police Department with further questions.

In a statement posted on social media, the Asheville Mall said, “We are aware of the videos circulating on social media. The @AshevillePolice responded immediately and the situation was diffused. An arrest has been made. Please contact the Asheville Police Department with further questions.”

The Asheville Police told the Citizen-Times that the incident remains under investigation. It is not clear if additional charges could be filed against David Steven Bell.

Bell is due in court on February 5.