Daniel Tomanelli, 23, is joining the Pence family. He recently popped the question to Audrey Pence, the Vice President’s youngest daughter and she said yes.

Audrey Pence, 24, shared several pictures to Instagram on February 17, 2019. The caption reads, “Of course I said yes, and then we got caught in a rainstorm! Rain or shine, I’m so glad you’ll always be by my side.”

Of course I said yes, and then we got caught in a rainstorm! Rain or shine, I’m so glad you’ll always be by my side

Daniel Tomanelli and Audrey Pence have been dating since at least 2016. The first photo of them posing together appears on her Instagram feed in March of 2016.

Daniel Tomanelli and Audrey Pence likely met in class. Like his fiancee, Tomanelli majored in international affairs and political science.

Tomaneli earned a minor in Arabic. He and Pence can keep their language skills sharp together. She also studied Arabic and spent time abroad in Turkey and Jordan as an undergraduate.

While at Northeastern, Tomanelli was a member of the Kappa Sigma fraternity.

3. Tomanelli & Pence Traveled to Jordan Together as Undergraduate Students

Audrey Pence spent a month in Amman, Jordan as an undergrad, according to the Sydney Morning Herald. Based on her Instagram feed, it appears Daniel Tomanelli was there alongside her. She shared a photo from July 8, 2017, showing her fiance with the city of Amman behind him.

Tomanelli wrote an article about the Arab Spring that was published in the Northeastern University Political Review in August of 2014. The article states in the headline that he was part of the class of 2018.

In the piece, he wrote about the role of the military in political uprisings and what could cause a regime to either succeed or fail in implementing democracy. You can read his article here.

4. Daniel Tomanelli Survived a Plane Crash That Killed His Father in 2017

Daniel Tomanelli tragically lost his father, Dr. Joseph Tomanelli, on April 24, 2017 in a plane crash. The two were flying together near the Meriden-Markham Airport. They were reportedly practicing takeoffs and landings, according to the Record-Journal, when the plane crashed through a fence and caught fire. National Transportation Safety Board investigator Todd Gunther said it was not clear who was flying at the time.

The NTSB report, cited by the New Haven Register, found no evidence that the plane had malfunctioned. The newspaper cited FAA records that showed Dr. Tomanelli was a practiced flyer with more than 1,200 hours of experience. He earned his pilot license in 2005.

Dr. Tomanelli was pronounced dead at the scene of the crash. He was 56 years old. Daniel was ejected and was found lying near the plane. The family kept details of his injuries private.

Happy birthday to my dear Dan❣️I love and treasure you

Daniel Tomanelli was born August 6, 1995. He grew up in Cheshire, Connecticut, a town in New Haven County. An online records search suggests he attended Xavier High School, an all-boys Catholic school in Middletown.

Tomanelli has an older brother named Nick, who also appears to have remained in Connecticut.

According to the obituary, his father Joseph was born and raised on Long Island. He met his wife, Evangeline, at Cornell University. He practiced medicine for 27 years and was working with the Hartford HealthCare Medical Group at the time of his death. The obit included the following about how he felt about his sons, Daniel and Nick: “Raising his sons, Joe poured himself into encouraging, teaching, coaching and sharing his passions with them – knowing that they were the most wonderful gifts he would leave to the world.” 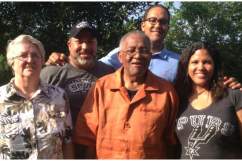 Will Hurd’s Family: 5 Fast Facts You Need to Know