A 43-year-old Louisiana high school teacher and married mother of four children is accused of having an improper sexual relationship with a student, The Advocate of Baton Rouge reports. Tracie Zimmerman, a teacher at Assumption High School was arrested on February 5, according to online records from the Assumption Parish Sheriff’s Office.

Zimmerman was charged with prohibited sexual conduct between an educator and a student, a misdemeanor, the sheriff’s office said. The case remains under investigation and it is not clear if further charges could be brought against Zimmerman when evidence is presented to the local prosecutor.

Zimmerman is accused of having “prohibited sexual conduct” with an 18-year-old male student at the high school. No other details about the accusations against Zimmerman have been made public. The sheriff’s office said its detectives found during their investigation there was probable cause to arrest Zimmerman. She has since been released from custody, but could not be reached for comment by Heavy. It is not clear if she has hired an attorney who could speak on her behalf.

“I commend the school system for their immediate response and cooperation in this extremely serious matter,” said Sheriff Leland Falcon in a statement.

1. The School District Says It Is ‘Devastated by the Allegations of This Serious Breach of Trust’ by the English Teacher

The Assumption Parish Sheriff’s Office began investigating on Tuesday, February 5, after a student “expressed concern” to administrators about an alleged improper relationship between the teacher, Tracie Zimmerman, and the 18-year-old student, The Advocate reports. Zimmerman was arrested that day, according to a press release issued Wednesday.

“The school system is devastated by the allegations of this serious breach of trust by an employee,” Assumption Parish School Superintendent Jeremy Couvillion said in a statement. “Our focus now is on supporting our students, supporting law enforcement in their investigation, and continuing our investigation into this matter.”

Zimmerman is an English teacher and has worked in the school district for 18 years. According to her Linkedin profile, Zimmerman has taught at Assumption High School in Napoleonville, Louisiana, since August 2013.

The school board declined to comment on Zimmerman’s current employment status, citing privacy and personnel laws. School officials have been investigating along with police.

Assumption Parish Sheriff Lelan Falcon told WAFB-TV, “Most juvenile laws are going to be based on age differences. Gaps in age or underage. In this case, the student is an 18-year-old. So, he’s classified as an adult.” Falcon added, “You always hope that these things don’t occur, but when they do, we’re going to investigate it fairly and impartially and we’re going to apply the law the way it’s written.”

The case has been forwarded to District Ricky Babin for evaluation and prosecution, Falcon told the news station. 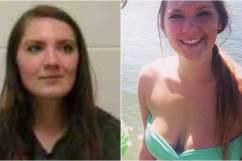 2. Her Husband Was Also Arrested on February 5, Jail Records Show

Tracie Zimmerman’s husband, Harold Zimmerman III, was also arrested on February 5, according to Assumption Parish jail records. He was charged with disturbing the peace – appearing in an intoxicated condition, a misdemeanor offense. Harold Zimmerman was later released on his own recognizance on February 6.

Additional details about Harold Zimmerman’s arrest, including whether it had any connection to the charges against his wife and the investigation into her alleged wrongdoing, were not immediately available. Harold Zimmerman could not be reached for comment by Heavy. Zimmerman, who goes by the name Bob Zimmerman, is an ammonia production operator at a company in Donaldsville, Louisiana.

It is not clear how long the Zimmermans have been married.

3. Zimmerman Is the Mother of 2 Sons & 2 Daughters

Tracie Zimmerman is a mother of four children, including two daughters and two sons, according to her Facebook page.

Zimmerman is a native of Napoleonville, Louisiana, and lives there with her husband and kids. While details of her alleged “prohibited sexual conduct” with the 18-year-old student have not been released, school officials said it is not believed that anything improper occurred on school property.

“The investigation revealed there was some improper conduct there. It did take place outside of the school campus. But still, the person involved with Ms. Zimmerman is a student,” Sheriff Lelan Falcon told WAFB-TV.

4. She Is a Graduate of Assumption High School & Nichols State Who Taught at Belle Rose Middle School for Many Years Before Returning to Her Alma Mater

Tracie Zimmerman and her husband.

Zimmerman began her career as a teacher at Belle Rose Middle School, also in the Assumption Parish school system, according to her Linkedin profile. In 2013, she began working at Assumption High School, her alma mater, as an English teacher, she wrote on Linkedin.

5. Zimmerman Was Released From Jail on Bail & Faces Up to 6 Months Behind Bars if Found Guilty

Tracie Zimmerman was released from the Assumption Parish jail on Febraury 5 after posting bail, according to online records. She faces up to 6 months in jail if found guilty of the misdemeanor charge of prohibited sexual conduct between an educator and a student. Zimmerman could also be fined up to $1,000.

According to Louisiana state law, “Prohibited sexual conduct between an educator and a student is committed when any of the following occur:”

(1) An educator has sexual intercourse with a person who is seventeen years of age or older, but less than twenty-one years of age, where there is an age difference of greater than four years between the two persons, when the victim is not the spouse of the offender and is a student at the school where the educator is assigned, employed, or working at the time of the offense.

(2) An educator commits any lewd or lascivious act upon a student or in the presence of a student who is seventeen years of age or older, but less than twenty-one years of age, where there is an age difference of greater than four years between the two persons, with the intention of gratifying the sexual desires of either person, when the victim is a student at the school in which the educator is assigned, employed, or working at the time of the offense.

READ NEXT: Runner Kills Mountain Lion With His Bare Hands in Colorado in Self-Defense

Read More
5 Fast Facts, Breaking News, Crime, Louisiana, Police
Tracie Zimmerman is a teacher at Assumption High School in Louisiana who is accused of having an inappropriate sexual relationship with a student, police say.