Ted Kennedy was an American politician who served as the U.S. Senator from Massachusetts. He held the position from 1962 until his death on August 25, 2009. He was 77. At the time of his death, he was the second most senior member of the Senate and the third-longest-continuously-serving senator in U.S. history.

Kennedy was also the longest-living of his siblings, as older brothers John and Robert were assassinated in the 1960s. He dealt with several health issues during the last few years of his life, including the diagnosis of a malignant brain tumor and cancer. Read on to learn more about his death.

1. He Suffered Major Injuries During an Airplane Crash In 1964

1964 – Edward Kennedy's plane crash & Presidential Election DayJune 19, 1964 – Massachusetts Senator Ted Kennedy is involved in a plane crash in which one of his aides and the pilot were killed. He was pulled from the wreckage by fellow senator Birch E. Bayh II (D-Ind.) and spent weeks in a hospital recovering from a broken back, a punctured lung, broken ribs,…2009-04-22T15:25:20.000Z

Kennedy nearly lost his life on June 19, 1964, when the plane he was flying on crashed into an apple orchard in Southampton, Massachusetts. The pilot was instantly killed, as was one of Kennedy’s aids Edward Moss. Kennedy was pulled from the wreckage, but he sustained major injuries in the process. “My friend and colleague in the Senate, Birch Bayh, risked his life to pull me from the wreckage,” he told Newsweek.

Kennedy spent months in a hospital recovering from a punctured lung and internal bleeding. He also broke his back, which led to him suffering chronic pain for the rest of his life. “With crushed vertebrae, broken ribs, and a collapsed lung, I spent months in New England Baptist Hospital in Boston,” he recalled, adding that he would have been paralyzed were it not for the efforts of the hospital staff. “To prevent paralysis, I was strapped into a special bed that immobilizes a patient between two canvas slings,” he explained. “Nurses would regularly turn me over so my lungs didn’t fill with fluid.”

Kennedy’s near-death experience led to him walking with a cane for much of 1965. It also led to him developing a lifelong interest in health care, as he felt every American should get the treatment that he did. “I knew the care was expensive, but I didn’t have to worry about that. I needed the care and I got it,” he said.

2. He Was Diagnosed With a Malignant Brain Tumor In May 2008

Ted Kennedy on his ChildhoodGive yourself the gift of knowledge — subscribe to Big Think Edge: http://bit.ly/bigthinkedge If you're interested in licensing this or any other Big Think clip for commercial or private use, contact our licensing partner Executive Interviews: https://www.executiveinterviews.biz/rightsholders/bigthink/ Two driving forces are behind Kennedy: family and religion.2011-06-02T16:10:14.000Z

On May 17, 2008, Kennedy suffered a seizure, and was rushed from the Kennedy Compound to Massachusetts General Hospital in Boston. Within days, doctors had diagnosed that Kennedy had a malignant glioma, which is a kind of cancerous brain tumor. He was initially told that the glioma was inoperable, but he pursued different opinions and surgical experts.

On June 2, 2008, Kennedy underwent brain surgery at Duke University Medical Center. According to CNN, the operation lasted over three hours, and was conducted by Dr. Allan Friedman. Kennedy was conscious during the surgery to minimize the risk of any neurological effects. The surgery was deemed a success, and the Senator left the hospital a week later.

Despite the surgery and several chemotherapy treatments, Kennedy suffered many more seizures. He suffered a mild seizure on September 26, 2008, and was immediately rushed to the nearby hospital. He also suffered one on January 20, 2009, during the luncheon for Barack Obama’s presidential inauguration. Kennedy’s tumor continued to spread, and by spring 2009, he was told that treatments for it were no longer effective.

3. He Considered Health Care Reform to Be the ‘Cause of His Life’ As a U.S. Senator

During his time in the U.S. Senate, Kennedy lobbied for universal health care and health care reform. He explained his stance during a 2009 interview with Newsweek. “I have enjoyed the best medical care money can buy. But quality care shouldn’t depend on your financial resources, or the type of job you have, or the medical condition you face,” he said. “Every American should be able to get the same treatment that U.S. senators are entitled to.”

Kennedy, who considered health care reform to be “the cause of [his] life,” felt that his personal experiences were instrumental in shaping his passions. “In 1973, when I was first fighting in the Senate for universal coverage, we learned that my 12-year-old son Teddy had bone cancer,” he shared. “He had to have his right leg amputated above the knee. Even then, the pathology report showed that some of the cancer cells were very aggressive.”

“That experience with Teddy made it clear to me, as never before, that health care must be affordable and available for every mother or father who hears a sick child cry in the night and worries about the deductibles and co-pays if they go to the doctor,” he continued. “My family has had the care it needed. Other families have not, simply because they could not afford it.”

4. He Was Confined to a Wheelchair & Had Difficulty Speaking Before His Death In August 2009

During the last few months of his life, Kennedy was confined to a wheelchair and had difficulty speaking. He was awarded the Presidential Medal of Freedom in July 2009, but could not attend the ceremony to receive this medal. He was also unable to attend the public funeral of his sister Eunice Kennedy Shriver, but he did attend the private service. Kennedy told the New York Times that he was thankful for the “wonderful life” that he led and was determined to make a “good ending” for himself.

He spend his final days at home with his wife Vicki. His routine consisted of reading the newspaper, drinking coffee, and playing with his dogs Sunny and Splash. He was also in process of watching every James Bond film on DVD. Dr. Lawrence C. Horowitz, Kennedy’s former Senate Chief of Staff, said that there was lots of happiness. “There were a lot of joyous moments at the end,” he confirmed. “There was a lot of frankness, a lot of hugging, a lot of emotion.”

“He was the only one of the Kennedy boys who had a semi-knowledge that his end was near,” added former Boston Globe columnist Mike Barnicle. “There was no gunman in the shadows, just an M.R.I. It was a bad diagnosis, but it allowed for the gift of reflection and some good times.” Kennedy died at his home on August 25, 2009.

5. He Was Laid to Rest Next  At Arlington Cemetery Next to His Brothers

Kennedy’s funeral procession was held on August 29, 2009. It was attended by President Barack Obama, as well as former presidents Jimmy Carter, Bill Clinton, and George W. Bush. There were also three former Vice presidents, 58 senators, 21 former senators, and several members of the House of Representatives. Obama gave the eulogy, calling Kennedy the greatest legislator of our times.

“He was a product of an age when the joy and nobility of politics prevented differences of party and philosophy from becoming barriers to cooperation and mutual respect, a time when adversaries still saw each other as patriots,” Obama said. “I, like so many others in the city where he worked for nearly half a century, knew him as a colleague, a mentor, and above all, a friend.”

There were several entertainers and celebrities who attended Kennedy’s funeral, including singer Tony Bennett, actors Jack Nicholson and Lauren Bacall, and former Boston Celtics basketball player Bill Russell. He was laid to rest at Arlington National Cemetery, near the graves of his assassinated brothers John and Robert. His grave marker is identical to that of his brother Robert’s; which is a white oak cross and a white marble foot marker bearing his full name. 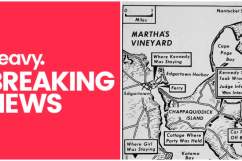 Read More
cause of death, Politics
Ted Kennedy died in 2009 after a series of debilitating health issues. Learn more about Kennedy's death.