Mary Jo Kopechne was a school teacher and a political campaign specialist who died in a car accident at Chappaquiddick Island on July 18, 1969. Her death, and the actions taken by U.S. Senator Ted Kennedy, the car’s other passenger, are the focus of the ABC special “The Girl In the Car.”

Kopechne’s body was discovered the day after the accident, shortly before Kennedy reported it to the police. He pleaded guilty to a charge of leaving the scene and causing personal injury, and later received a two-month suspended jail sentence. That said, the details around Kopecnhe’s death have led to subsequent investigations and speculation about the timeline of events that night.

Here’s what you need to know about Kopechne’s death:

RIP Mary Jo Kopechne; july 18, 1969 in edgartown, massachusetts, united states. twenty eight year old mary jo, an ex-campaigner for senator robert kennedy, met the former’s brother ted at a political celebration on chappaquiddick island. though she barely knew him, she accepted his offer of a ride back to the ferry. mary jo did not tell anyone that she was leaving the party at all, let alone who she was traveling with, and she left her purse and keys behind on the island. en route to the ferry, mary jo and ted crashed the car into a pond from which ted escaped and mary jo did not. ted only informed authorities of his involvement after the car and mary jo’s body were located, though he passed several houses and opportunities to call for police or medical help. mary jo’s death was officially ruled as drowning and/or suffocation. ted was found guilty of a hit-and-run.

On 17th July, 1969, Kopechne joined several other women who had worked for the Kennedy family and attended a party at the Lawrence Cottage. According to the New York Times, Kennedy decided to leave the party at 11:15 p.m., at which time Kopechne asked if he could give her a ride. She said that she was feeling ill, and wished to return to her hotel so that she could go to bed.

Kennedy got behind the wheel and took the only paved road on Chappaquiddick Island. When he came to a “T” intersection, he turned right by mistake, and drove on Dike Road, which leads to the ferry. He drove less than a mile before going off the bridge. “I was unfamiliar with the road and turned onto Dyke Road instead of bearing left on Main Street,” he recounted. “After proceeding for approximately a half mile on Dyke Road I descended a hill and came upon a narrow bridge. The car went off the side of the bridge….”

Kennedy denied any accusations that he was intoxicated at the time. In a speech given a week after the accident, he maintained that he was sober, and that there was “no truth, no truth whatever to the widely circulated suspicions of immoral conduct that have been leveled at my behavior and [Kopechne’s] regarding that evening.”

2. Kennedy Said He Made Several Attempts to Recover Kopechne’s Body After the Accident

After going off the bridge, Kennedy’s vehicle came to rest upside down under the water. Kennedy said that he was able to swim free of the vehicle, but that Kopechne was not. He later told the inquest that he called her name several times from the shore and tried to swim down to reach her seven or eight times.

“The car turned over and sank into the water and landed with the roof resting on the bottom. I attempted to open the door and window of the car but have no recollection of how I got out of the car,” he explained. “I came to the surface and then repeatedly dove down to the car in an attempt to see if the passenger was still in the car. I was unsuccessful in the attempt.”

Kennedy then rested on the bank for about 15 minutes before he returned to Lawrence Cottage, where the party was still going on. He lay sprawled in the backseat of a vehicle for some time, before getting help and returning to the site of the accident.

3. Kennedy Did Not Report the Accident & Kopechne’s Body Was Not Discovered Until the Following Morning

July 26, 1969. 49 years ago. The Chappaquiddick Incident. Edward 'Ted' Kennedy pleads guilty to leaving the scene of an accident, ultimately resulting in the death of a passenger. Kennedy had been in a car accident, one week earlier while driving home from a party on the night of July.18/1969, when he missed the mouth of a narrow bridge on a dirt road in the darkness and plunged into Chappaquiddick Strait. Kennedy suffered a concussion but was able to escape when his 1967 Oldsmobile Delmont 88 flipped up-side-down and sank. In the car with him was Mary Jo Kopechne, a friend (and rumored lover) of Kennedy whom drowned in the car. Kennedy dove into the water repeatedly to try and save the girl until going into shock. He then went back to the party and informed a group of what happened. After a few more rescue attempts he went back to his hotel room and passed out. After some miscommunication and confusion with friends at the party, the police were not called until morning. This incident severely damaged, if not destroyed Kennedy's political career, his chances of becoming president in 1972 and 1976 and his reputation as a senator. Ted Kennedy died in 2009. #kennedy #tedkennedy #edwardkennedy #chappaquiddick #chappaquiddickstrait #thechappaquiddickincident #chappaquiddickincident #kopechne #marykopechne #maryjokopechne #marthasvineyard #massachusetts #boston #capecod #oldsmobile #oldsmobile88 #oldsmobiledelmont #oldsmobiledelmont88 #1960s #60s #1969

Kopechne’s body was not discovered until the following morning, when local divers came across Kennedy’s vehicle. Instead of reporting the accident to the police, Kennedy had searched for the body and decided to return to his hotel room around 2 a.m. after coming up empty-handed. The New York Times reports that Kennedy learned of the news around 9:30 a.m. He immediately turned himself into the police.

In a statement made by Kennedy on July 25, 1969, he said that he had enlisted the help of his cousins to search for Kopechne’s body. “Instead of looking directly for a telephone number after lying exhausted in the grass for an undetermined time, walked back to the cottage where the party was being held and requested the help of two friends, my cousin Joseph Gargan and Paul Markham, and directed them to return immediately to the scene with me,” he said. “This was some time after midnight – in order to undertake a new effort to dive.”

Kennedy urged Gargan and Markham not to tell the other partygoers about the accident. “I felt strongly that if these girls were notified that an accident had taken place and Mary Jo had, in fact, drowned, that it would only be a matter of seconds before all of those girls, who were long and dear friends of Mary Jo’s, would go to the scene of the accident and enter the water with, I felt, a good chance that some serious mishap might have occurred to any one of them,” he told author Leo Damore.

Dr. Donald R. Mills, the county’s associate medical examiner, performed the autopsy on Kopechne. He ruled the death as an accidental drowning, and believes that she could not have been saved, even if Kennedy had immediately notified the police. “[She] was the most drowned person I’ve ever seen,” he told the New York Times. He said her lungs must have been full of water because when he made “just light pressure on the chest wall … water would simply pour out of the nose and mouth.”

Mills initially told Time Magazine that Kopechne died anywhere from five to eight hours before he looked at her body, which was around 9:30 a.m. This was at odds with Kennedy’s account that they left the party at 11:15 p.m. the night before. However, Dr. Mills changed his stance at the inquest, stating that Kopechne had been dead “six or more hours,” with no outside time limit for the moment of her death.

Massachusetts State Police claim that an analysis of Kopechne’s blood showed the alcoholic content at nine‐tenths of 1 per cent, which is the equivalent of 3½ to 5 ounces of 80-to-90 proof liquor. This information suggests that Kopechne was one of the heaviest drinkers at the Lawrence Cottage that night.

5. An Official Autopsy on Kopechne Was Never Performed

Dr. Mills never ordered an autopsy on Kopechne because he was satisfied that her cause of death was drowning. He also said that he got no encouragement from the district attorney’s office to order one. As a result, there are some who have speculated that there’s more to Kopechne’s death that meets the eye. John N. Farrar, the captain of the Edgartown Fire Department’s Scuba Search and Rescue Division, said that he found Kopechne with her “head cocked back, face pressed into the foot well, hand holding onto the front edge of the back seat.”

By holding herself in such a position, Farrar believes that she was attempting to get to the remaining air in the car. “It looked as if she were holding herself up to get a last breath of air. It was a consciously assumed position,” he said during the inquest. “She didn’t drown. She died of suffocation in her own air void. It took her at least three or four hours to die. I could have had her out of that car twenty-five minutes after I got the call. But he didn’t call.”

Kopechne’s undertaker Eugene Frieh was also surprised by how little water was in her lungs. “[She] produced some water flow, water and foam, mostly foam,” he recalled. “Very little water was expelled from the lungs. I raised my eyebrows because I expected much more water.” Medscape reports that subsequent efforts to exhume Kopechne’s remains for postmortem examination have been denied. 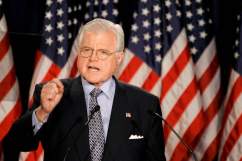 Read More
cause of death