Detectives investigating the Delphi murders of Abigail Williams and Liberty German are seeking information about an online profile named anthony_shots.

Update: A search warrant affidavit obtained by WISH-TV shows that authorities previously identified the man behind the anthony_shots profile as Kegan Anthony Kline. You can read more about that warrant and Kline here. 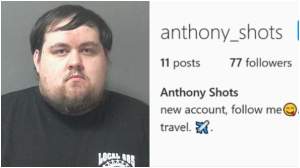 It’s the latest clue in the long-stalled investigation into the slayings of the two girls, who were murdered while out for a walk on an old railroad bridge along Monon High Bridge trail near Delphi, Indiana, on February 13, 2017. Authorities previously released a short video and audio of a man they encountered on the trail, but the killer has never been identified.

Police released profile pictures from the anthony_shots account, but they say that the model used in them is not tied to the murders.

“While investigating the murders of Abigail Williams and Liberty German, detectives with the Carroll County Sheriff’s Office and the Indiana State Police have uncovered an online profile named anthony_shots,” they wrote.

“This profile was being used from 2016 to 2017 on social media applications, including but not limited to, Snapchat and Instagram. The fictitious anthony_shots profile used images of a known male model and portrayed himself as being extremely wealthy and owning numerous sports cars. The creator of the fictitious profile used this information while communicating with juvenile females to solicit nude images, obtain their addresses, and attempt to meet them. Pictured below, you’ll see images of the known male model and images the fictitious anthony_shots profile sent to underage females.”

Kelsi German has been active in the murder investigation into her sister’s death. According to People, she switched her college major to psychology and criminal justice after the slayings.

“I had this switch that went off in my head and I found my passion with helping people in the true crime community, especially,” German told the outlet. “And then I found a career path that would get me to the spot I wanted to be in, where I could help these people for the rest of my life. And now, that’s what I’m planning on doing.”

The Anthony_Shots Instagram Page Is Still Up & Claims the User Is ‘Alaska Born, Indiana Raised’

Jim Piwowarczyk to HeavyA memorial near where Abby and Libby died.

Abby and Libby were murdered after going for a hike near an old bridge in February 2017. They were discovered near the Monon High Bridge Trail, Fox59 reported, which is part of the Delphi Historic Trails. Authorities have released two crime scene sketches of a possible suspect, one in which he looks far younger than the other. They also released Snapchat video from Libby’s phone of a man walking on a bridge toward the girls before they were killed. Libby also captured audio of his voice saying, “Down the hill,” according to WRTV. How exactly they died has not been released by authorities. In the intervening years, people have been investigated as suspects, but no arrests have been made.

Here’s the audio clip police released of the suspect’s voice in the Abby and Libby case: