Facebook Charlie Johnson was shot dead in Minneapolis hours before he was set to graduate from the University of St. Thomas.

Charlie Johnson was a University of St. Thomas student who was shot dead in downtown Minneapolis just hours before he was set to graduate. Johnson was caught in the crossfire during a shooting about 2 a.m. on May 22, 2021, outside of a nightclub that also left eight people injured and one of the two gunmen dead, police said in a press release. The other shooter was arrested, police said.

Johnson, a 21-year-old mechanical engineering student from Golden Valley, Minnesota, was pronounced dead at the scene, Minneapolis Police said in a statement. He was identified by the local medical examiner’s office on May 24. The shooting happened in the 300 block of N 1st Avenue. The man who was arrested at the scene, 24-year-old Jowan Contrail Carroll, of Bloomington, Minnesota, is being held on probable cause of murder. Police said the investigation is ongoing. The other man killed, who police say was also one of the shooters, has been identified by the medical examiner’s office as 24-year-old Christopher Robert Jones Jr.

“Of the 10 victims shot, preliminary information shows all are adults. 5 are males and 5 are females. The two deceased are males. One male is in critical condition and the remaining 7 have non-life-threatening injuries. Most of the injured are were transported to Hennepin County Medical Center however some showed up at other hospitals across the metro,” the police department said in its press release. “Anyone with information is encouraged to call CrimeStoppers at 1-800-222-TIPS (8477). Tips may be submitted electronically at www.CrimeStoppersMN.org. All Tips are anonymous and persons providing information leading to an arrest and conviction may be eligible for a financial reward.”

Here’s what you need to know about Charlie Johnson and his shooting death:

1. Johnson Was Shot After an Argument Led to a Shootout Outside the Monarch Nightclub in What Police Called an ‘Exceptionally Chaotic Scene’

The shooting happened as the Monarch nightclub closed in downtown Minneapolis just about 2 a.m., police said in a press release. Officers were already in the area because of the crowds from the bar closing. According to the press release, “Officers in the area of the 300 block of N 1st Avenue heard the sound of gunshot. Officers ran towards to gunfire and encountered an exceptionally chaotic scene.”

According to police, “Preliminary investigation reveals that two people were standing in a crowded area and got into a verbal confrontation. Both individuals pulled out guns and began shooting at each other. 7 Homicide Detectives have been called in to work this case.” 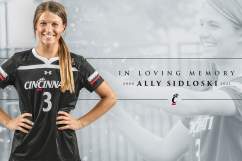 2. Johnson’s Sister Walked Across the Stage at the University of St. Thomas Graduation to Receive His Diploma

Johnson’s sister walked across the stage at the University of St. Thomas graduation just hours after her brother was shot dead. Camille Johnson, who graduated from the Saint Paul university herself in 2019, wrote on Facebook, “Oh, my Charlie. My best friend. My angel and hero. There are no words to explain this pain and hole in my heart. You were taken from us too soon and it’s simply not fair.”

She added, “It’s with so much pride, honor, and a very very heavy heart that I crossed the stage that was meant to be yours yesterday and accepted the diploma that you so undoubtedly deserved, on behalf of the best man that I knew. You’ll always be the most special person in my life. You lived your life so full and so true to yourself with a smile on your face. This world has a lot to learn from you. I love you with my whole heart Chuckles. I just can’t believe this is real. You deserved the world my sweet sweet angel!”

University of St. Thomas President Julie Sullivan said in a statement, “Our community is shocked and saddened by the news of Charlie’s death. We grieve with his family and friends and pray for their comfort. On a day he and his family should have been celebrating his graduation from our School of Engineering, we are devastated by this loss.”

The school added in a message posted to its website, “Campus Ministry and President Sullivan have been in contact with Charlie’s family and St. Thomas joins his loved ones in grieving his loss. Charlie has been remembered at all three commencement ceremonies today with his name read and an empty chair placed with a cap and gown. A member of his family accepted his diploma on his behalf. Counseling and Psychological Services and Campus Ministry are available for students, faculty and staff who desire support.”

3. Johnson’s Family & Friends Have Shared a Photo of Him on Social Media With the Words ‘I Am Charlie’ Written Across It

ME confirms 21yo Charlie Johnson, gunned down outside Monarch Nightclub died of a gunshot wound to chest. He was killed on eve of his graduation from @UofStThomasMN. His family has started an “I am Charlie” social media movement, telling me, Charlie "was the best of all of us." pic.twitter.com/HWebil7mxL

Johnson’s father, Greg Johnson, wrote in a tribute to his son on Facebook, “This beautiful man is my son. He was stolen from us yesterday. The pain is too raw to deal with, but I want the world too know what it lost yesterday. He was the best of all of us and left a beautiful impact on every single life he touched. He is my hero. Please, say his name with me and let’s work together with peace and love to end this culture of gun violence and crime. No politics please, just love and compassion for each other as Charlie had for all of us. I AM CHARLIE!”

Greg Johnson also posted a photo of Charlie Johnson with the words, “I am Charlie,” written across it. Other family members and friends, including Charlie’s mother, Veronique Johnson, changed their Facebook profile photos to that image.

Greg Johnson told the Minneapolis Star Tribune his son and his friends were walking home when the shooting occurred and he was hit by stray gunfire. He told the newspaper one of his son’s close friends stayed with him and tried to give him “aid and comfort.” Johnson told the Star Tribune, “He was a ray of sunshine without a mean bone in his body.”

4. Johnson Graduated From Robbinsdale Armstrong High School & a Friend Said, ‘He Had a Pure Soul, an Unmatched Wit & a Constant Eagerness for a Good Time’

FacebookCharlie Johnson was shot and killed in Minneapolis.

Johnson graduated from Robbinsdale Armstrong High School before attending the University of St. Thomas, according to his Facebook profile. A friend wrote on Twitter, “His sister is amazing. their whole family is. Charlie was one of the kindest, funniest, welcoming people I’ve ever met. We always got in trouble for talking during class. I’d ask him to tell me words in French. He always supported my antics. you’re so loved and missed so much.”

Another friend, Sam Malecek, wrote on Facebook, “The world needs more Charlies. With him around, I sure didn’t feel like the goofiest guy in the room. He had a pure soul, an unmatched wit, and a constant eagerness for a good time. You are so loved, and we’ll miss you always. I hope you have all the Hamm’s and yo-yos you could ever want. Rest easy, Charlie.”

Katie Mickelson added in a Facebook post shared by Greg Johnson, “I was fortunate enough to grow up with Charlie Johnson. Attending school together from kindergarten all the way to graduating from high school. There’s few people whose presence feels like a warm hug. The kind where you can just show up as you are, and they love you anyways.” She continued:

Since day one he has dealt with my antics. We met when we were kids at Robbinsdale Spanish Immersion. I thought being bilingual was cool, but he was trilingual. So of course when I was little I thought it was the neatest thing, I still do. He always had me asking him to speak in French or teach me new things. Charlie’s mind was an encyclopedia. He knew many things, and I’d pester him with questions whenever I could.

Since hearing about this tragedy, all I can think about are my favorite moments with him. A lot of them included distracting each-other to the point of crying from laughing during class. Then there was me encouraging him to play on Club Penguin with me, instead of doing schoolwork.

Mickelson added,d “My heart goes out to the Johnson’s and everyone else who’s been impacted by Charlie’s life. He led with grace and humility. He was someone you wanted to befriend. He was the kind of person that when you started a new semester unsure of who would be in your class, you had an immediate sense of relief when you saw he’d be in it with you.”

5. The Minneapolis Police Department Asked for Federal Help After the Shooting & the City’s Police Chief Said, ‘These Brazen Senseless Acts of Gun Violence Must Stop

Minneapolis Police Chief Medaria Arradondo said in a statement posted to Facebook the day of the shooting, “These brazen senseless acts of gun violence must stop. The perpetrators of these crimes should never find refuge or anonymity in our communities. Minneapolis police officers will continue to rush into harms way to save lives however we need help from community leaders and residents to stand up and speak out denouncing loudly that they will not tolerate this violence as well.”

Arradondo added, “Our greatest strength is when we all work together to keep our city safe. Our children are watching us and how we respond during these times. Let’s come together to uplift hope and peace.”

According to the Star Tribune, the Minneapolis Police Department plans to ask for assistance from state and federal law enforcement agencies. Mayor Jacob Frey said at a press conference after the shooting, “Safety in our city has to be a priority.” He said the reinforcements from the state and federal level are “really, really critical.”

READ NEXT: Woman Falls to Her Death During NYC Rooftop Party

Loading more stories
wpDiscuz
0
0
Would love your thoughts, please comment.x
()
x
| Reply
Charlie Johnson was a University of St. Thomas student who was shot dead in Minneapolis just hours before he was set to graduate.